Russia has stationed nearly 80,000 troops on its border with Ukraine. Not far away, in the Donetsk region of eastern Ukraine, Russian-backed separatists have recently intensified their attacks. And yesterday, Secretary of State Antony Blinken visited Kyiv, to emphasize American support for Ukraine.

Blinken, holding a bouquet of roses, stood in a rainstorm to visit a memorial for Ukrainian soldiers killed in the fighting with Russia. He later said he had been emotionally moved “to pay tribute to those who lost their lives defending Ukraine’s democracy.”

Since President Biden took office — following Donald Trump, who was famously solicitous of President Vladimir Putin — tensions between Russia and the U.S. have been rising. This morning, we want to help you make sense of what’s going on.

What is Putin doing?

The buildup of troops since March is both a message to Ukraine as well as to the U.S. and the European Union.

For Ukraine, it appears to be a classic attempt at intimidation. It is a reminder that Russia considers the country to be within its sphere of influence and opposes Ukraine’s attempts to join NATO. Russia has already annexed Crimea from Ukraine, after a 2014 invasion. Now, says Michael Crowley, a Times correspondent traveling with Blinken this week, the 80,000 Russian troops may be partly an attempt to strengthen Russia’s position in peace talks over the Donetsk region, potentially giving Putin more control over eastern Ukraine. 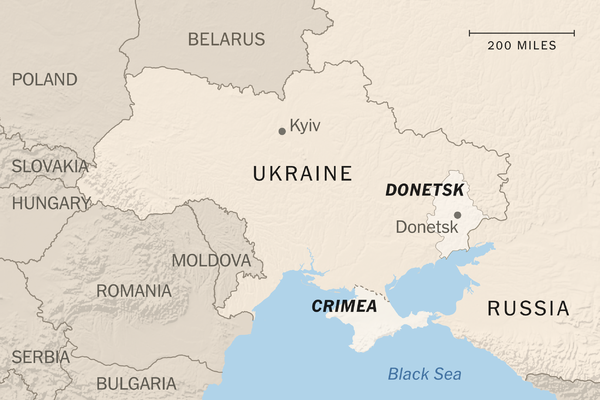 For the U.S. and the European Union, the troops are a signal that Russia cares more deeply about Ukraine than they do. The U.S. and NATO are currently staging their own military exercise across Eastern Europe, called Defender Europe, which involves 28,000 troops. Russia’s deployment “is essentially intended to call the bluff of the United States and Europe,” The Times’s Helene Cooper and Julian Barnes wrote, “and to make clear to Kyiv the limits of Western support.”

The troop deployment also seems to contain a message bigger than just Ukraine. It is a show of strength by Putin as he also takes steps to quash the protest movement led by Aleksei Navalny, which has inspired more dissent than Putin has faced in years. And it’s a reminder to Biden that if he becomes too aggressive toward Russia, Putin can create problems for him.

Biden has an ambitious foreign policy agenda, some of which has little to do with Russia and some of which requires Russian cooperation, such as climate change and Iran’s nuclear program. An escalating conflict over Ukraine would make all of that more difficult.

“Putin is a master of raising tension and then tamping it down a bit,” Roger Cohen, a longtime Times correspondent, told us. By getting more aggressive with Ukraine, Putin can show Biden and Europe’s leaders that he has leverage over them.

And what is Biden doing?

Biden has used some harsh words about Putin — calling him a killer — but Biden’s actual policies have been more moderated. On the one hand, Blinken’s visit to Kyiv has been provocative, and last month the U.S. imposed sanctions on Russia, in response to hacking and election interference.

But the sanctions stopped far short of what the U.S. could have imposed. “I was clear with President Putin that we could have gone further, but I chose not to do so,” Biden said when announcing them. “The United States is not looking to kick off a cycle of escalation and conflict with Russia.”

Anton Troianovski, The Times’s Moscow bureau chief, describes the White House strategy as “a carefully choreographed carrot-and-stick approach.” Lara Jakes, who covers the State Department, points out that Biden and Putin have known each other for years and that their relationship, for all of the tension, is characterized by “pragmatism and a fair bit of predictability.”

Perhaps Biden’s biggest goal is to create a stable relationship in which Putin decides that he has more to lose than to gain from confrontation. And that’s not easy.

Russia, as The Economist recently wrote, is already “the single most prolific stoker of instability on Europe’s borders, and arguably the most energetic troublemaker in rich democracies, funding extremist parties, spreading disinformation and discord.” But of course Russia could still cause even more trouble, as Putin is now demonstrating in Ukraine.

The Tokyo Olympics will offer the Pfizer vaccine to athletes and officials. Japan has declined to use a Chinese-made vaccine, which studies have shown to be less effective.

Companies are wavering on requiring employees to get vaccinated. It’s a delicate balance between health and privacy.

Contamination at a Baltimore vaccine manufacturer is slowing the pace of shots in Canada, Europe and South Africa.

In a sign of flagging demand, only 9 percent of American adults have not been vaccinated and say they would like to get a shot as soon as possible, a poll showed.

Florida installed new voting restrictions, including a limit on drop boxes and new ID requirements, and Texas took steps toward passing its own far-reaching bill.

A Republican who is hoping to replace Gov. Gavin Newsom of California wanted attention. So he hired Tag, a half-ton bear.

Nearly one million Americans have signed up for Obamacare coverage since February, thanks partly to new subsidies.

With drugs for capital punishment in short supply, South Carolina is planning to bring back the firing squad.

A race is on to produce lithium in the U.S. It’s exposing a dirty secret about green cars.

Part of a Chinese rocket is tumbling in orbit and will probably fall to Earth this weekend. (Don’t panic.)

Changeup: As a teenager, former M.L.B. pitcher Ubaldo Jiménez made his mother a promise. Twenty years later, he made good.

Modern Love: A silly dance connects a mother and daughter.

A Times classic: Are you rich?

Lives Lived: After finally convincing her male editors that a female journalist could handle big news stories, Lucinda Franks became the first woman to win a Pulitzer Prize for national reporting. She died at 74.

Not everyone is happy about this weekend’s “Saturday Night Live” host: Elon Musk, the billionaire founder of Tesla. The decision has drawn criticism, partly because of Musk’s repeated tweeting of misinformation about the pandemic. Some cast members have expressed their displeasure, or as The Times’s Dave Itzkoff writes, “their befuddlement.”

The casting is an example of how “the ecosystem of fame has shifted,” the AV Club writes. Musk’s social media presence has earned him an unusual fan base for a C.E.O. It’s also a throwback to the early seasons of “S.N.L.,” when the show chose hosts based less on movie openings. Some of them also generated criticism, at the time or later:

In 1978, O.J. Simpson was not just a football player but also one of the country’s biggest stars. “Having him host an episode was a no-brainer,” Thrillist reports.

Rudy Giuliani hosted in 1997, when he was mayor of New York City. To this day, he is considered “one of its worst hosts,” Insider writes.

Lance Armstrong hosted in 2005 when he was facing doping allegations. The show later called him “the most despicable, vile human being ever to set foot on planet Earth.”

In 2015, Donald Trump, then a candidate for president, took the stage. “S.N.L.” staff members have since said they regret giving Trump the platform.

In Musk’s case, the polarized response is part of the appeal. Michael Che, one of the show’s head writers, said: “I like when the show has some edge.”

This chicken has bright flavors of ginger and lime.

Our colleagues at Wirecutter have tips on last-minute Mother’s Day gifts as well as free and discounted services for teachers.

How to flourish, the Rock for president and more stories narrated by the Times journalists who wrote them.

Here’s this week’s News Quiz. See how you do compared with other Times readers.

The pangram from yesterday’s Spelling Bee was imputing. Here is today’s puzzle — or you can play online.

Thanks for spending part of your morning with The Times. See you Monday. — David

P.S. The Times’s Amy Qin explains how she went from covering culture and politics in China to covering mixed martial arts in Florida — in under 48 hours.

Today’s episode of “The Daily” is about herd immunity. On “Still Processing,” how Tina Turner reclaimed her voice, and Senator Elizabeth Warren discusses working mothers on “The Ezra Klein Show.”

Lalena Fisher, Ian Prasad Philbrick and Tom Wright-Piersanti contributed to The Morning. You can reach the team at [email protected].