President Biden last week named 11 people he plans to nominate to serve on federal courts, more than any recent president this early in his term. Nine are women, three are Black women and one would become the country’s first Muslim federal judge.

I spoke to Carl Hulse, The Times’s chief Washington correspondent and the author of a book about Trump-era fights over the judiciary, about why Biden is rushing to shape the courts and how judges became so central to American politics. Our conversation has been condensed.

Ian: Donald Trump’s judicial appointments were a big part of his presidency, and now Biden seems to be making filling vacancies a priority. Why have the courts become so important?

Carl: Because the courts are deciding our political fights now. Climate change, voting rights, immigration, redistricting: Because the legislative branch is so stuck, the courts are getting to be the arbiters. They’ve been amplified as a political issue because of their increased importance in deciding big, cutting-edge issues.

Why is Biden in such a hurry?

Democrats are operating under the assumption that they have only two years. They could easily lose the Senate next year, and then they’d have to get judicial nominees that Republicans would be willing to vote for. So I think we’re going to see a big push from Biden.

So far, what distinguishes Biden’s nominees from his predecessors’?

Federal judicial nominees have typically been somebody from the U.S. attorney’s office, a local prosecutor or a partner in a law firm. But after Trump put 220-some judges on there — many of them very conservative, most of them white males and some of them with very little legal experience — the Biden folks concluded they needed to get different kinds of people on the courts.

The U.S. Court of Appeals for the Seventh Circuit, in Chicago, has a totally white lineup of judges. So Biden picked Candace Jackson-Akiwumi, who is a Black woman and a former federal public defender. Public defenders see the federal courts from another side — from the perspective of the defendant. That’s a big change. I think Biden wanted to make a statement about the kinds of judges he wants: people with different life and legal experiences.

There are currently 68 vacancies, with another 26 scheduled to open this year. Does that limit how transformative Biden can be?

The transformation is going to be in the types of judges. Biden is going to have a hard time matching Trump’s numbers, which were over four years. And that was a concerted campaign by Mitch McConnell, to the exclusion of many other things.

The big problem is time. You have the background checks and hearings, and Republicans are going to resist some of these folks. Because of the changes in the filibuster rules, if every Democrat supports a nominee, they can get through. But it can be a long, drawn-out process.

Is the emphasis on judges something Democrats learned from Trump?

Presidents and Senate majorities have always wanted to install judges who reflect their ideologies to some extent. But it’s definitely a bigger point of emphasis because of Trump. Democrats watched what Senator McConnell did so successfully, and they are eager to replicate that from the other end of the ideological spectrum. Trump’s going to have people on the bench for 30 years, maybe 40. There’s still a few Reagan judges out there.

Trump appointed three justices to the Supreme Court. Many Democrats hope that Stephen Breyer, who is 82 and one of the court’s three remaining liberals, will retire soon. Does that seem like Biden’s best hope to fill a seat?

We’ll see what happens. A lot of Democrats don’t want to get caught in this Ruth Bader Ginsburg situation again. And Justice Breyer is an extremely smart guy, and also a political guy. He knows what’s going on here. 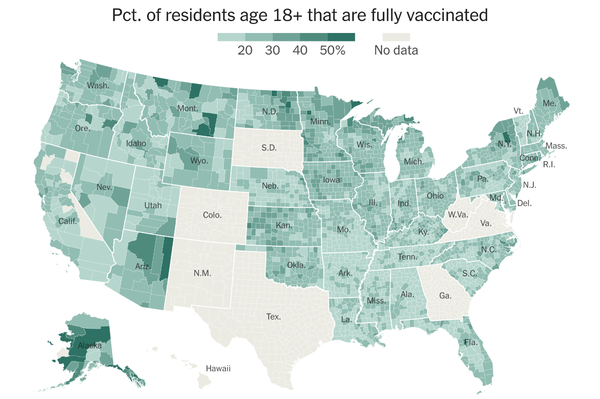 The U.S. is averaging more than three million shots a day as of this past weekend.

Online disinformation is sowing vaccine distrust among evangelicals. Nearly half of white evangelical adults in the U.S. say they will not be vaccinated.

The Republican governors of Florida and Mississippi voiced opposition to “vaccine passports,” credentials that would show a person’s vaccination status.

“Godzilla vs. Kong” earned about $48.5 million in the U.S. last week, the strongest box-office performance of the pandemic by far and a sign that Americans are eager to return to movie theaters.

Myanmar’s security forces have killed hundreds of civilians since a February military coup. At least 40 were children.

The Biden administration is accelerating a vast campaign of hunger relief and hoping to make parts of it permanent. The Times’s Jason DeParle explains.

Stanford claimed the N.C.A.A. women’s basketball championship with a win over Arizona, 54-53. It’s the team’s first title since 1992.

Survivors, family members and officials tell the story of how 25 people came to be packed into an S.U.V. that crashed last month near the U.S.-Mexico border.

“A lot of them wanted to blow up Washington. That’s why they thought they were elected,” John Boehner, a Republican who served as House speaker, writes in Politico Magazine about the right’s paranoid turn. (Warning: Profanity abounds.)

A New SoHo: It was a haven for artists. Now it’s full of luxury storefronts. What’s next? Maybe affordable housing.

Lives Lived: Winfred Rembert survived a near-lynching in rural Georgia in 1967. He learned to carve figures into leather while in prison, and later became a renowned artist whose work told the story of the Jim Crow South. He died at 75.

Are you experiencing a lack of motivation? Is it taking you double or triple the time to accomplish basic tasks? Are the days of the week blurring together? Welcome to the late stage of the pandemic, which has “left many of us feeling like burned-out husks, dimwitted approximations of our once-productive selves,” Sarah Lyall writes in The Times.

The pandemic has left many reeling from a loss of health, of income, of loved ones or of a normal way of life. Though circumstances vary, the mood is often similar.

“When people are under a long period of chronic, unpredictable stress, they develop behavioral anhedonia” — a reduced ability to take pleasure in activities — Margaret Wehrenberg, an expert on anxiety, said. “And so they get lethargic, and they show a lack of interest — and obviously that plays a huge role in productivity.”

How are people trying to cope? Some are meditating, turning to alcohol or edibles, going for walks or re-engaging with a spiritual practice. Others are finding pockets of joy where they can — sending postcards, exchanging gifts with neighbors or adopting pets. And some have embraced the notion that it’s all right not to be productive during a period of major global upheaval.

“You’re supposed to be inventing something or coming up with the next big business idea,” one person told The Times last year. “I’m trying to be more OK with just being.”

The secret ingredient in this creamy pasta is miso.

The Korean star Yuh-Jung Youn has had a thriving career for five decades. Now, at 73, she’s up for an Oscar for her role in “Minari.” She spoke with The Times about her career.

Explore the hidden details of this stunning 17th-century portrait of the emperor who built the Taj Mahal.

Daniel Kaluuya, star of “Get Out” and “Judas and the Black Messiah,” hosted “Saturday Night Live” this past weekend. Here’s a recap.

The pangram(s) from Friday’s Spelling Bee were machine and mechanic. Here is today’s puzzle — or you can play online.

Here’s today’s Mini Crossword, and a clue: Gas that comes down as rain on Jupiter (four letters).

Thanks for spending part of your morning with The Times. David Leonhardt will be back tomorrow. — Ian

Editor’s note: Our News Quiz had a scoring issue on Friday. We have fixed the problem and apologize for the hiccup.

P.S. The word “pajamaville” appeared for the first time in The Times over the weekend (it’s how one reader described her pandemic burnout).

Today’s episode of “The Daily” is about Myanmar’s military coup. On the Book Review podcast, Carl Zimmer discusses the debate over what it means to be alive.

Tom Wright-Piersanti and Sanam Yar contributed to The Morning. You can reach the team at [email protected].