In the year since China passed a sweeping national security law for Hong Kong, the mainland government has steadily tightened its grip on the city, quashing the pro-democracy movement.

Officials said they would censor Hong Kong films that they considered a threat to Beijing’s sovereignty, a sharp slap to the city’s artistic spirit. In March, Pro-Beijing lawmakers called for work by the dissident artist Ai Weiwei to be barred from a museum. Courts have sentenced pro-democracy activists to prison. And last week, the police raided Apple Daily, the biggest openly pro-democracy newspaper in the city, arrested its top editors and froze its bank accounts. Today, the newspaper said it would close this week.

Vivian Wang, who covers Hong Kong for The Times, updates us on the situation.

Claire: Last time we talked with you about Hong Kong in this newsletter was in March. What’s happened since?

Vivian: A lot has changed, but all in line with a general trend: increasingly harsh, and overt, suppression of the rights that made Hong Kong different from mainland China. An annual vigil on June 4, to commemorate the 1989 Tiananmen Square Massacre against pro-democracy protesters in Beijing, was banned.

Tell us about China’s involvement in Hong Kong’s elections.

China has overhauled Hong Kong’s election system. Before anyone can run for office, they will have to pass a screening committee set up by Beijing. The central government had gotten worried that pro-democracy residents were going to try to sweep the upcoming legislative elections. So Beijing passed another top-down order, as it had with the security law.

There are a few major changes. Only “patriots,” defined by a screening committee, will be allowed to run for office.

Also, in the past, half of the seats in the legislature were directly elected (the other half were reserved for representatives of industry groups, often dominated by pro-Beijing candidates). Now, less than a quarter will be directly elected.

Many pro-democracy leaders are in prison. What does that mean for the movement?

Those sentenced range from some of the most veteran pro-democracy leaders to people in their 20s who had been considered the next generation. The government is sending a message: Anyone who becomes too prominent, or too vocal, is putting themselves at risk. These figures were definitely important in boosting public morale and giving people someone to rally around.

On a logistical level, this may not change much. There basically haven’t been any protests or organized pro-democracy events in the past year, and the pro-democracy political parties are limited in what they can do, especially with the new election system. 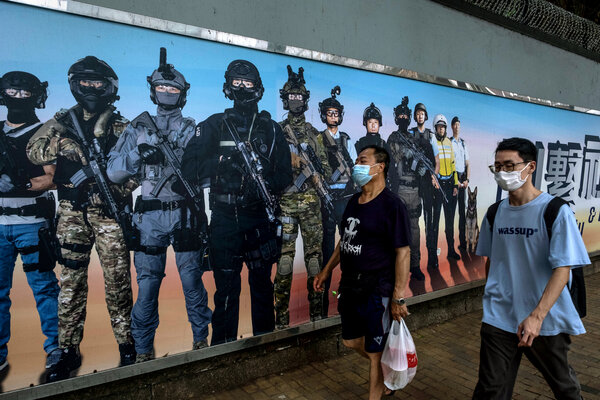 You mentioned censorship. What does that mean for pop culture in Hong Kong?

Hong Kong has historically had a strong film industry, and it’s been trying to turn itself into an arts hub. But with the new rules around movie censorship, and other recent attempts to get artwork banned from museums, it’s hard to imagine how the city could keep up the reputation it wants.

There are still attempts to keep Hong Kong’s cultural world alive, notably through independent bookstores. But the mainland Chinese market is so big that many creators, especially in the corporate world, don’t want to alienate it. That will probably mean a shrinking space for anything critical.

What’s the mood inside the pro-democracy movement?

It’s still bleak. Some people say protesters will come out again when the pandemic fully ends and social distancing rules can’t be used anymore to ban public assembly. But many people I talk to say they are really scared.

For more: A 23-year-old protester is the first person charged under the security law to stand trial. He could face life in prison.

Four Saudis who helped kill the dissident writer Jamal Khashoggi in 2018 had paramilitary training in the U.S. the previous year.

Texas Republicans will make another effort to restrict voting after Gov. Greg Abbott called a special session of the state Legislature.

The U.S. has fully vaccinated 150 million people, but will probably miss President Biden’s goal of 70 percent of adults getting at least one shot by July 4.

Chile, Mongolia and other countries that relied on Chinese-made vaccines are now battling severe outbreaks.

More than 150 workers at a Texas hospital quit or were fired over a mandatory vaccine policy.

Morgan Stanley will require employees and visitors to be vaccinated.

India administered more than eight million doses on Monday, part of a push to fully vaccinate its nearly one billion adults by the end of the year.

With almost all in-person ballots counted, Eric Adams was leading in the Democratic primary for New York City mayor. Maya Wiley was second.

These results are not final, and we may not know the winner for weeks. The city still has to count absentee ballots, as well as the ranked-choice votes. (New Yorkers could rank up to five candidates in order of preference.)

For more: A detailed map of how people voted, takeaways and the latest vote count.

“We are very free”: An analysis of thousands of videos reveals a propaganda campaign in China’s Xinjiang region.

Recreational marijuana will be legal in Connecticut starting July 1.

Spain pardoned a group of jailed Catalan separatists that it jailed over a 2017 independence vote.

A joyful surprise: Twin pandas were born at a zoo in Tokyo.

Amazon bills its annual Prime Day as a “holiday.” For many of the company’s workers, it’s miserable, Alex Press writes in Jacobin.

Cryptology: An engineer says he cracked the Zodiac killer’s code.

Nature: When an eel climbs a ramp to eat squid from a clamp, that’s a moray.

Masterpiece: With help from A.I., a 17th-century Rembrandt is whole again.

A Times classic: Why you procrastinate (and what to do about it).

Lives Lived: Mark Peel was one of a handful of California cooks who emerged in the 1970s and ’80s to create a looser, farm-focused style of cuisine. He died at 66.

Britney Spears goes back to court

The case surrounding Britney Spears’s conservatorship is back in court today, and The Times has obtained court records that provide a rare view of her perspective. Spears will address the court directly, although it’s unclear if she will make her remarks in public.

The conservatorship, which started in 2008, restricts Spears’s rights, prohibiting her from making most decisions. Her father, Jamie Spears, is the steward of her roughly $60 million fortune. Among the findings in the records: Spears, now 39, could not make friends or restain her kitchen cabinets without the approval of her father.

Conservatorships are supposed to be a last resort for people who cannot take care of themselves, such as older people with dementia. Spears’s case has drawn public scrutiny in part because she has regularly performed over the past decade.

Spears’s father and others involved in the conservatorship have maintained that it is a smooth-running machine that rescued the star after public struggles and concerns about her mental health. But the court records tell a different story: Spears has pushed for years to end the conservatorship. It “comes with a lot of fear,” she said.

Here are 14 buzzy new books to look out for in July.

“Evil,” on Paramount+, is a stylish blend of religious thriller and procedural mystery.

The pangram from yesterday’s Spelling Bee was billboard. Here is today’s puzzle — or you can play online.

Thanks for spending part of your morning with The Times. See you tomorrow.

P.S. The word “pseudonormalcy” — from an Opinion essay about pandemic reopenings — appeared for the first time in The Times this week.

“The Daily” is about the voting rights bill. On “The Argument,” a debate about America’s falling birthrate.

Ian Prasad Philbrick, Tom Wright-Piersanti and Sanam Yar contributed to The Morning. You can reach the team at [email protected].