Want to get The Morning by email? Here’s the sign-up.

Good morning. Can teachers be vaccinated quickly? And can most schools safely reopen now? Yes and yes. 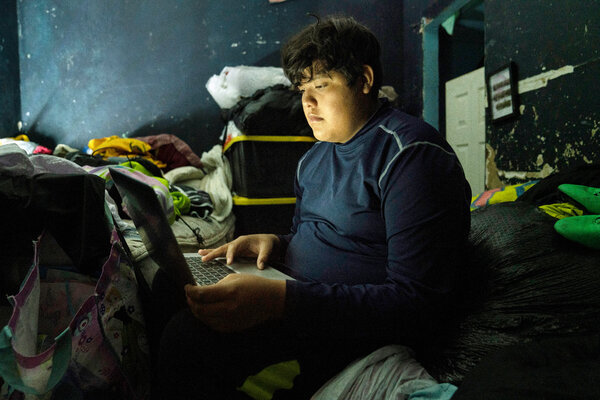 There are two obvious ways to reopen schools. One is to take precautions like mask wearing that minimize the risk of outbreaks inside school buildings. The other is to vaccinate the country’s teachers as quickly as possible.

Both strategies now appear to be feasible — and yet neither is happening in many places.

Instead, about half of K-12 students are still not spending any time in classrooms. The rates of school closures are highest in Maryland, New Mexico, California and Oregon, according to Burbio. Experts say that the extended absences are causing large learning problems, especially for lower-income students.

Today’s newsletter looks at how American children can quickly and safely get back to school.

There are enough vaccine doses

The country now has enough vaccine doses to move teachers to the front of the line without substantially delaying vaccinations for everyone else.

Nationwide, about 6.5 million people work inside a K-12 school. It’s a substantially smaller group than the 21 million health care workers, many of whom were in the first group of Americans to become eligible for vaccines.

As a point of reference, Moderna and Pfizer have delivered an average of more than one million new doses to the federal government every day this month. That daily number is on track to exceed three million next month. Immediately vaccinating every school employee would push back everybody else’s vaccine by a few days at most.

A few states have already prioritized teachers, with Kentucky apparently the furthest along, according to Education Week. It has finished administering the first dose to the bulk of K-12 staff who want one. “This is going to help us safely get our kids back in school faster than just about any other state,” Gov. Andy Beshear said, “and it’s going to allow us to do it without risking the health of those that come in to serve those children.”

Even before teachers are fully vaccinated — a process which can take more than a month after the first shot — many schools have shown how to reopen.

It involves “masking, social distancing, hand-washing, adequate ventilation and contact tracing,” as Susan Dominus wrote (in a fascinating Times Magazine story on how Rhode Island mostly kept its schools open). It also involves setting up virtual alternatives for some students and staff members who want them. When schools have followed this approach, it has typically worked, according to research by the Centers for Disease Control and Prevention and others.

In one of the most rigorous studies, a group at Tulane University looked at hospitalizations (a more reliable measure than positive tests) before and after school reopenings. The results suggest that at least 75 percent of U.S. communities now have Covid well enough under control to reopen schools without sparking new outbreaks, including many places where schools remain closed.

The evidence is murkier for places with the worst current outbreaks, like much of the Carolinas. And some schools do seem to have reopened unsafely, including a Georgia district that is the subject of a new C.D.C. case study.

Still, Douglas Harris, the Tulane economist who runs the research group, told me, “All the studies are suggesting we can do this, if we put our minds to it.” He added: “We can’t do school the old way, but we can do better than this.”

A final note: I have been writing lately about the costs of the overly negative message that many people are spreading about the vaccines, even though the vaccines virtually eliminate severe forms of Covid. Schools are another place where you can see those costs — in Oregon.

Like Kentucky, Oregon has made it a priority to vaccinate teachers. But some teachers unions there have expressed skepticism about reopening even after teachers are vaccinated, as my colleague Shawn Hubler has written.

The number of confirmed Covid deaths in the U.S. has surpassed 500,000. “We have to resist becoming numb to the sorrow,” President Biden said. (State-by-state numbers are here.)

The F.D.A. said it would let drugmakers use smaller clinical studies when testing vaccines adapted for new virus variants.

New data from Britain, where more than a quarter of people have had a shot, shows the vaccines to be working extremely well, sharply reducing hospital admissions and deaths.

In Japan, suicides among women have risen for the first time in a decade, a sign of the pandemic’s toll.

To develop vaccines, the world needs monkeys. And they’re in short supply.

The Supreme Court rejected Donald Trump’s bid to shield his financial records, forcing his accountants to hand them over to New York prosecutors. (Here’s what’s next.)

Merrick Garland told senators that the Capitol riot investigation would be his first priority as attorney general. He appears headed for an easy confirmation, five years after Republicans blocked his Supreme Court nomination.

A Senate hearing today about the Capitol riot will feature testimony by the top two security officials who were there. Here’s what to watch for.

Also today, Neera Tanden — Biden’s nominee to head the Office of Management and Budget — is facing her confirmation hearing. Her chances are dimming.

New Jersey became the 14th state where marijuana is legal for recreational use. Sales are probably months away.

An attack on a humanitarian convoy in the Democratic Republic of Congo killed three people, including the Italian ambassador.

Facebook struck a deal with the Australian government to restore news posts there. The government is close to passing a bill that would make tech companies pay for journalism.

Federal authorities charged Emma Coronel Aispuro with plotting a jailbreak for the drug trafficker “El Chapo,” her husband, and helping him run his empire.

From Opinion: Finding love in the pandemic is like “falling through space, time further compressed in isolation.”

Lives Lived: A Harvard-trained lawyer, Ahmed Zaki Yamani was a longtime oil minister in Saudi Arabia and the architect of the Arab world’s drive to control its own energy resources in the 1970s. Yamani died at 90.

Spring training has begun, and Major League Baseball is suffering from a strange affliction: Some high-profile teams are not trying to win. The Boston Red Sox, Chicago Cubs, Cleveland Indians, Colorado Rockies and Pittsburgh Pirates have all jettisoned top players in recent trades, receiving only a modest return.

It’s deeply frustrating to fans. “Can you file a complaint on behalf of all Rockies fans with the Better Business Bureau against Rockies management because this is just totally horrific?” one recently wrote to The Denver Post.

What’s going on? Baseball teams are businesses, and winning isn’t always the best route to profit. The teams receive substantial income from merchandise sales, television contracts and more. And the pandemic has crushed the form of revenue that depends most on performance — people buying tickets.

As Tyler points out, many players are also frustrated, believing owners are behaving like a cartel that holds down salaries. The bargaining agreement expires after this season, and the next round of negotiations could be rocky.

In Tyler’s recent columns, he looks at three teams that are trying to win: the San Diego Padres, New York Mets and New York Yankees.

This simple chicken curry has a gingery, garlic-flecked tomato sauce.

“The Committed” is the sequel to Viet Thanh Nguyen’s Pulitzer Prize-winning “The Sympathizer.” Read The Times’s review.

Barack Obama and Bruce Springsteen are hosting a podcast together. On “Renegades: Born in the USA,” they talk about fatherhood, race and more.

The pangram from yesterday’s Spelling Bee was dormitory. Here is today’s puzzle — or you can play online.

Thanks for spending part of your morning with The Times. See you tomorrow. — David

P.S. The Times announced its team to cover the Biden White House, including two new reporters on the beat: Zolan Kanno-Youngs and Jim Tankersley.

Today’s episode of “The Daily” is the first of two about Covid in New York nursing homes. On the latest “Sway,” a dog racer’s lessons on resilience.