Aleksei Navalny, the fiercest political opponent of Vladimir Putin, is in prison. He returned to Russia in January after recovering from a near-deadly poisoning in Siberia. After the police arrested him on charges that were widely seen as politically motivated, a wave of pro-Navalny protests swept the country.

For today’s newsletter, Anton Troianovski, The Times’s Moscow bureau chief, catches us up on what’s going on in Russia. Our exchange has been edited for length.

Claire: Let’s start with the basics. Who is Aleksei Navalny, and why were there protests in Russia recently?

Anton: Navalny is Putin’s most prominent and best organized domestic critic. When Navalny tried to run for president in 2018, the Kremlin didn’t let him. But he opened offices nationwide and campaigned for people to boycott the election. And it’s that kind of organizing that really matters. He and his team produce YouTube videos that get millions of views. He can mobilize people. The question, now that Navalny is in prison, is whether he can continue to do that.

What’s the basis of Navalny’s opposition?

He says that Putin is a thief, that his party is corrupt and that regular Russians are suffering every day because of that: bad roads, crumbling hospitals. For Navalny, it’s all about fighting corruption and about creating a more fair and free society.

Navalny is in prison, and his lawyers are saying his health is in decline. This past year also saw the advent of a new phase: The arrests and repression surrounding the Navalny protests were the most severe that Russia has seen under Putin.

When Putin took power in 2000, Russia was essentially a democracy. Putin has been trying to stifle dissent more and more aggressively, but he is far from stamping it out. Young people, for instance, now tend to get their news from the internet, rather than from state TV. They are opposing Putin in extraordinary numbers — only 31 percent want to see him remain president, according to one recent poll.

Putin built his image and his power by controlling TV — that has always been his biggest weapon — but the internet remains essentially free in Russia. This is an experiment to see what Putin can do to squash those remaining freedoms that Russians have.

Tell us about elections in Russia.

Elections are not free and fair in Russia. For example, the ruling party gets almost infinite access to TV airwaves, and the opposition gets almost none. But they’re not 100 percent rigged, either. And that’s the loophole that the Navalny people — and other Putin opponents — are trying to use. There have been opposition candidates on the ballot, because this illusion of democracy matters to Putin. The whole concept that Putin presents is that he is the president because the majority of Russians want him to be.

Navalny’s team has promised to organize another nationwide protest once 500,000 people sign up for it; they haven’t given a date. After that, the next big moment could be around the parliamentary elections in September. That’s when Putin opponents of all stripes will really try to organize opposition to the Kremlin. The opposition is going to find ways to keep the pressure on, and the Kremlin will find means of fighting back even harder.

Reader call-out: The Morning is hosting a subscribers-only live event on April 15. We want to answer your questions about the coronavirus vaccines and feature your original poems. Send us your responses. 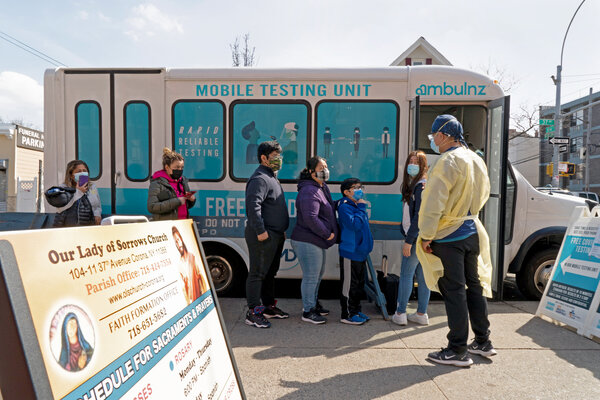 New coronavirus cases ticked up in the U.S. last week, particularly in Michigan and the Northeast. Hospitalizations and deaths may continue to fall, because many people with the highest risk of severe illness have been vaccinated.

About 5,000 people attended a test concert in Barcelona, Europe’s latest experiment to see how to safely hold live events. “It had just been too long since I was last able to dance and have fun at a concert,” one attendee said.

Snacks, informational “huddles” and a Tyler Perry television special: This is how one nursing home persuaded its hesitant staff members to be inoculated.

The Ever Given, the giant container ship that got wedged in the Suez Canal six days ago, is partially afloat again, raising hopes that traffic can soon resume. The entire global trading system hangs in the balance.

“Most of the soldiers are brainwashed.” Four officers told The Times about life inside Myanmar’s fearsome army, which has turned its guns on civilians again.

Tens of thousands of people have fled a coastal area in northeastern Mozambique after insurgents sieged a town in the gas-rich region.

Five people on a heli-skiing excursion, including the Czech Republic’s richest man, died in a helicopter crash in Alaska.

A debate in some European countries over who should translate Amanda Gorman’s poetry is exposing the lack of diversity in the world of literary translation.

The trial of Derek Chauvin over the killing of George Floyd starts in Minneapolis today. Here’s what to know about the case.

Amazon warehouse workers in Bessemer, Ala., have until the end of today to decide whether to form the first union at an Amazon operation in the U.S. Counting votes could take days.

Billions of cicadas are expected to emerge in several states in the next few weeks after 17 years underground, just in time to help orchestrate the soundtrack of summer.

If you landed in a randomly selected spot in the U.S., could you guess the area’s political leanings? A game from The Upshot puts that to the test.

The New New World: How a tale of local corruption became a #MeToo moment for China.

Lives Lived: Howard Schnellenberger built the offense for the Super Bowl champion Miami Dolphins in 1972, then revived football programs at the Universities of Miami and Louisville. He died at 87.

Basketball is a fast, free-flowing sport — until the final moments of a game, when things slow to a crawl. In a recent N.B.A. game, the last 58 seconds of game time took almost 18 real-time minutes, James Herbert of CBS Sports writes, as the teams repeatedly fouled each other and called timeouts to stop the clock from running down.

Fed up with the end-of-game drudgery, Elam has devised a new way to end basketball games. His system calls for the clock to be turned off in the final minutes. A target score would be set — say, 10 points above the leading team’s score — and the first team to reach that number would win.

The system would make clock-stopping fouls pointless and guarantee that the game ends on a made shot.

The Elam Ending, as it’s now known, is catching on: An annual competition, the Basketball Tournament, adopted it a few years ago; there, it caught the attention of the N.B.A., which has used it in the past two All-Star Games — to rave reviews.

“I didn’t know what to expect,” LeBron James said after last year’s All-Star Game. “But throughout the whole fourth quarter and at the end of the game, everybody was like, ‘That was pretty damn fun.’” — Tom Wright-Piersanti

In Assam, a northeastern state in India, a group of women known as the Hargila Army is spearheading a conservation effort to rescue an endangered stork.

The pangram from Friday’s Spelling Bee was garbanzo. Here is today’s puzzle — or you can play online.

Thanks for spending part of your morning with The Times. David Leonhardt is off this week and will be back Tuesday, April 6. We’ll see you tomorrow. — Claire

P.S. The word “fauxmorbidity” — a mild ailment used to justify receiving a Covid vaccine — appeared for the first time in The Times recently.

Today’s episode of “The Daily” is about the trial over the death of George Floyd. On the Book Review podcast, A.O. Scott discusses Tillie Olsen, and Wendy Lower talks about recently declassified Holocaust records.

Ian Prasad Philbrick and Sanam Yar contributed to The Morning. You can reach the team at [email protected].