Home » Analysis & Comment » Opinion | How the Pandemic Is Changing Restaurants 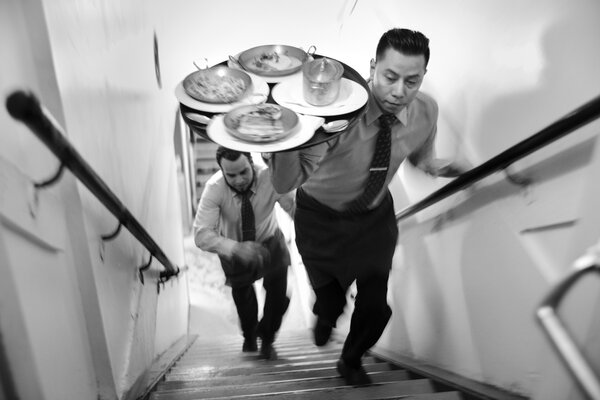 Re “Restaurants Will Never Be the Same,” by Peter Hoffman (Opinion guest essay, Aug. 13):

As we read Mr. Hoffman’s thoughtful prescriptions we should be aware that he was the chef/owner of three truly marvelous restaurants, enterprises that took seriously both the agricultural politics at the beginning of the food chain and the gastronomy at the other end.

I was a regular at those restaurants, and I was perfectly happy to pay the premium that cost, and to understand it as a kind of donation to the cause of an ethical and environmentally responsible food system. I also understood, as I added a little something to the tip, that I was extremely fortunate to be able to afford this behavior, and that most Americans couldn’t.

So where do we go from here? Mr. Hoffman suggests that “dining out less isn’t necessarily a bad thing,” but I think he would agree that turning dining out into an even more exclusive thing is not what we’re hoping for.

New gastronomical movements in this country, in Western Europe, in South America and elsewhere are now exploring the roots of various ethnic cuisines. Wouldn’t it be a shame if we built a restaurant menu around Grandma’s recipes, but Grandma could never afford to go?

I loved Peter Hoffman’s article, but it reminded me again of how much things have changed in the restaurant industry since I was a food server here in San Francisco in the 1970s. Mr. Hoffman discussed how customers seem to have forgotten their manners. He’s no doubt correct about that, and I was happy to read last month about the “day of kindness” approach one owner implemented for her employees following customer abuse.

That’s more like it, because the change I’ve seen in the past 50 years is that restaurant managers no longer stick up for the floor workers the way they used to. We didn’t tolerate customer abuse back then and very often exercised the “We reserve the right to refuse service” statement that was posted on the front door.

Customers can be monsters, but the only way to change their behavior is to stop tolerating it. Just throw the bums out!

Sadly, many restaurants will not survive the pandemic era.

Nonetheless, dining establishments wishing to remain competitive in today’s economic environment must reduce their hours of operation to better accommodate the personal needs of workers, as well as offer living wages to nonmanagerial staff members.

Increases in meal prices will undoubtedly reflect this new model of alignment, transforming dining habits from regular conveniences to the occasional luxury.

As the hospitality industry adapts to a more equitable framework of business, patrons who are experiencing deviations in consistency at their favorite restaurants should try to exercise higher degrees of patience when choosing to dine out.

Peter Hoffman, a chef and former restaurant owner, lays out the trials and tribulations that restaurants face. He acknowledges that to create a healthier, more efficient workplace that’s good for customers and employees alike, a fundamental change in the attitudes and practices of restaurant owners, and customers, must occur.

But he doesn’t mention the action most needed to ensure the humanization of the workplace: The employees must become unionized. Here in New York City we have an example of how unionized employees eradicated workplace abuses at Ellen’s Stardust Diner (“Waiters, Once Fired, Will Sing on the Red Vinyl Stage Again, With Back Pay,” news article, Oct. 5, 2017).

As long as employees have no collective representation, employers will continue to exploit them.

Drug Abuse Need Not Be a Death Sentence

Re “New Hope for an Epidemic,” by Jeneen Interlandi (Opinion essay, Aug. 9):

The impact of aggressively selling a potentially deadly prescription narcotic, and the need for investment in evidence-based treatment programs proven to save lives, are decades-long challenges that have failed to get the attention they deserve.

Even now, as $26 billion of opioid settlement dollars are expected to be distributed to states hard hit by the epidemic, prevention, treatment and recovery programs are still not guaranteed an adequate share from the payout.

That the Covid-19 pandemic has so far killed more than 620,000 Americans is a shocking number. But so, too, is 93,000, the number of Americans who died from drug-related causes in 2020 alone. Just as we mobilized our country’s impressive infrastructure of medical, scientific, political and economic resources against a highly contagious and deadly virus, we must do the same with drug addiction.

Let’s use this rare moment of hopeful news on funding to repair some of the tragic damage caused by opioid abuse and invest in research and professional training that will help build a treatment and recovery system that reassures every American family that drug abuse need not be a potential death sentence for their children.

Peter Provet
New York
The writer is the president of Odyssey House.

The Beauty of Summer

Re “I Don’t Want to Spend the Rest of My Days Grieving” (Opinion guest essay, Aug. 11):

Margaret Renkl captures the glory and fascination of summer and all it brings to us. Life is indeed short and nature is not easy. But nature is beautiful and it fills our lives with wonderment and joy.

If there is ever a time to stop, relax, look at the clouds and daydream a bit, it is a warm, bright summer day.