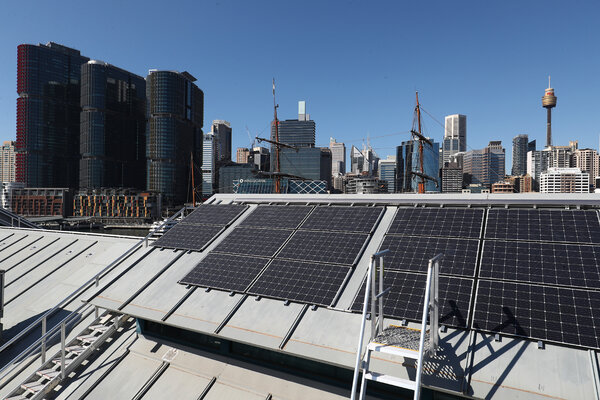 Dr. Griffith is the author of “Electrify” and the founder and chief scientist of Rewiring America, Rewiring Australia and Otherlab.

WOLLONGONG, Australia — I recently moved back here to my home country partly because I believe Australians can show the world how much money households can save through simple climate solutions like rooftop solar.

How is it that Australia, a country that historically has been a coal-burning climate pariah, is leading the world on solar? The four-bedroom house we recently bought provides a hint: It came with two rooftop solar systems of 11 kilowatts of combined capacity and a battery with 16 kilowatt-hours of storage. This system should produce more than enough to power my family’s home, one electric car and both of our electric bikes with some left over to send back to the grid.

Solar is now so prevalent in Australia that over a quarter of households here have rooftop panels, compared with roughly 2.5 percent of American households.

Australia pays its solar installers salaries comparable to those in the United States, and it buys most of its solar modules from China at 25 cents per watt, just a little less than what American buyers pay. Our houses are mostly detached single-family, like America, too. But unlike in the United States, it’s easy to get permits and install rooftop solar in Australia.

Australia’s rooftop solar success is a function partly of luck, partly of design. In the early 1990s, regulators considered rooftop solar a hobby, and no one stood in the way of efforts to make the rules favorable to small-scale solar. Looking for a good headline to varnish over Australia’s refusal to agree to the same greenhouse emissions reductions as the rest of the world in the 1997 Kyoto climate agreement, the federal government embraced renewable energy policies that set the stage for rooftop solar. Households were given rebates for the upfront costs, and were paid to send excess electricity back to the grid. In 2007, Prime Minister John Howard doubled the rebate, a move that is credited with kick-starting a solar installation boom.

Why has America been significantly slower to adopt this solution to high energy costs? The failures are mostly regulatory: local building codes and zoning laws, state rules that govern the grid connection and liability issues.

Permitting can take as little as a day in Australia and is done over the web; in the United States permitting and connecting to the grid can take as long as six months. Many customers just give up. America also generally requires a metal conduit around the wiring; in Australia, the connections can be less expensive soft cables, similar to extension cords.