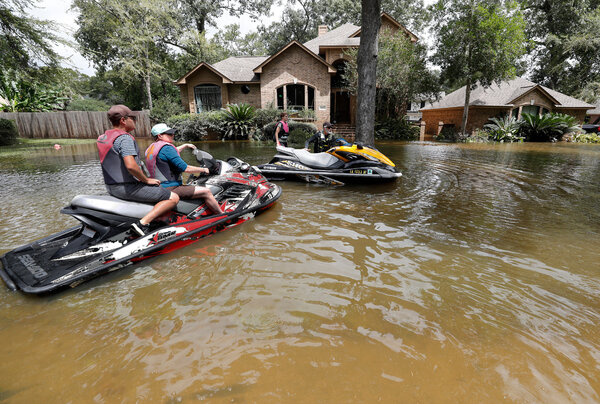 By Anna Rhodes and Max Besbris

Dr. Rhodes and Dr. Besbris are the authors of “Soaking the Middle Class: Suburban Inequality and Recovery From Disaster.”

When it hit Houston five years ago, Hurricane Harvey dropped more rain than any other U.S. storm since reliable record-keeping began in the late 19th century, causing $125 billion in direct damage. More than 150,000 homes flooded and over 80 Texans lost their lives.

In Friendswood, a middle-class Houston suburb of about 40,000 where we interviewed residents immediately after the storm and followed them for the next two years, more than 3,000 homes, one-third of the city’s total, flooded. A majority of these homes were not in officially designated floodplains when the storm hit, so few owners had flood insurance.

The flood caused tremendous damage. One resident told us that his house looked like a “giant blender,” while another said, “Everything was turned upside down.” Clearing out waterlogged possessions was especially emotional. “That was probably the worst day of my life,” one woman told us. “I got to watch everybody gather up all of my belongings to throw them to the curb like trash.”

The federal government has warned that Hurricane Harvey could be a harbinger of climate change. Warming temperatures are making rainstorms more intense and hurricanes wetter, and they increase the risk of severe flooding not only for coastal areas but inland communities as well. The Houston region could also see more extreme heat, drought and sea-level rise as climate change accelerates.

To prevent loss of lives, livelihoods and property, some scientists and planners are supporting a strategy called managed retreat, in which communities get government aid to move away from places most vulnerable to extreme weather. Managed retreat remains rare in practice — for example, a recent Houston Public Media report found that home buyouts in the Houston area have been sluggish, with only 750 completed and 5,000 properties still on Harris County’s post-Harvey buyout list.

We believe managed retreat must become more common so communities can avoid the worst consequences of climate changes. But even as academics and think tanks refined ideas on how to best relocate communities, leaving was not on the minds of Friendswood residents we spoke to after Hurricane Harvey. They struggled to imagine moving away from a place they called home even though their homes had just been destroyed and studies suggested that a growing number of houses in the area were susceptible to flooding.

Instead of driving people away, the devastation caused by disaster often has the opposite effect. Flooded residents described an increasing sense of connection to their neighbors in the immediate aftermath of the storm; an outpouring of assistance confirmed for them that Friendswood was a caring and supportive community.

But it was not simply their experiences right after the storm that kept Friendswood residents in place. Many said they did not want to uproot their lives. Parents often planned to stay until their children graduated from high school. Others who had moved to Friendswood for a job wanted to wait until retirement to decide whether to move. And some had purchased what they viewed as their “forever home” and said nothing would push them out. As one longtime resident told us, “They’ll probably take me out of here in a box!”

Home prices in the area didn’t decline at all after Hurricane Harvey, making it possible for many people to sell their damaged homes and buy somewhere less prone to flooding. But they did not know where they would go even if they wanted to move. They questioned whether other nearby communities had schools that were as good or neighbors who were as friendly. Many told us that Friendswood was too special to leave. The town had what one resident called a “Friendswood feel” — an ineffable quality that perhaps couldn’t be reproduced anywhere else.

The people we spoke to also referred to Hurricane Harvey as a “freak storm” and told us that a similarly intense deluge was unlikely to occur again for decades, if not a century. And they struggled to understand whether climate change was making them more vulnerable. Many didn’t think so, and even those who did were uncertain how to assess the threat to themselves. Without clear information about this kind of risk, it’s not surprising that residents didn’t have any plans to relocate.

What does this mean for managed retreat in a future where more and more places will face floods made more severe, and in some places more frequent, by climate change?

Currently, the money spent by the federal government on moving away from vulnerable places pales in comparison to that spent on rebuilding damaged properties. Programs like the Small Business Administration’s disaster loan assistance for homeowners instead encourage people to stay by providing money to repair their houses.

More resources for managed retreat could certainly help motivate relocation. But policymakers must also consider the emotional attachments people have to particular places. Encouraging mobility will require better information on the risks of staying put and the resources residents would have access to in less flood-prone neighborhoods. It will also require more equitable investments in those resources — like schools and other social services — before disasters strike, so that people feel they won’t be giving anything up by moving.

In the short term, far more needs to be done to communicate risk. While some residents may never want to leave their homes, our interviews in Friendswood show that few people have clear information about their vulnerability to future flooding. The federal government should mandate that flood risk is made clear in every lease, deed and mortgage contract and that this information is updated annually. Residents also need to know about alternative places to live before, and immediately after, their homes are damaged — the period when people are most open to accepting buyouts.

Efforts to expand managed retreat won’t be easy. But any costs for supporting managed retreat will ultimately be made up in savings from not having to repair homes that are just going to flood again and again.