Home » Opinion | My Child Asks: ‘Can Israel Destroy Our Building if the Power Is Out?’ 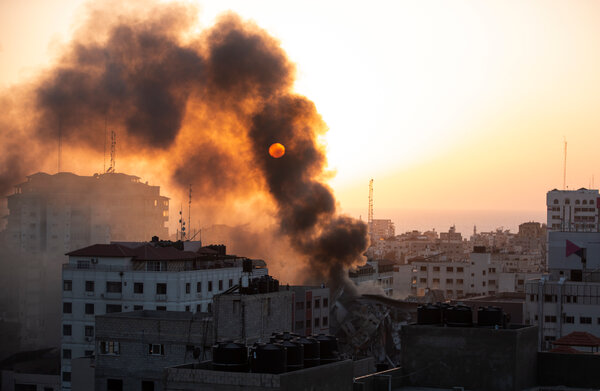 TAL AL-HAWA, Gaza Strip — On Tuesday night, my wife, six children and I huddled in the living room of our apartment, the place least likely to take a stray hit from Israeli missiles or the debris they scatter. We were watching Al Jazeera’s livestreaming of Israeli warplanes’ imminent destruction of al-Jawharah (The Gem), one of Gaza’s largest buildings, when the power went out.

Linah, 8 years old — or, in Gazan time, two wars old — asked sheepishly if “they” could still destroy our building now that the power had gone out.

The next day, Wednesday, would be Amal’s birthday. She was turning 6 and, for the last two years has made a habit of spending six months anticipating and planning her next birthday, followed by six months reminiscing about the celebration. She is quieter than her sister Linah and still a bit naïve about the world around her. I wish she were more naïve.

When Amal woke up on Wednesday, she didn’t ask for her birthday cake or candles. She knew something was wrong. She sensed the fear in the household. She heard the constant bombings.

My wife, Nusayba, insisted on celebrating anyway. “It should be a day of hope,” she said. Sure, dozens of families in Gaza have lost their homes in the past few days, and scores of people have died. This is no time for celebrations or cakes. “But we cannot give in to Israel,” Nusayba said.

I sneaked out of the house, making sure not to wear my Covid-19 mask, lest the Israeli drones mistake me for a target trying to hide. I bought Amal her favorite treats: Jordan almonds and chocolate biscuits. When I got back, we managed a muted rendition of “Senna Helwa” (Happy Birthday), far less raucously than we’d usually sing it. Amal smiled hesitantly. I looked at her and promised to take her to get the biggest cake when “this” is over.

On Monday, caught off guard by the attacks, I didn’t tell my kids their bedtime stories as usual. It was a mistake that I will try not to repeat.

I’ve since taken to tweaking the stories because of the bombings. In the original version of one tale I’ve made up for the children, two kittens die of neglect because their owner is careless. Now I say the kittens belong to a little girl named Amol and they only fall sick and are nurtured back to health because Amol is good-hearted and caring.

As the habit goes in Gaza, when parents end a children’s story, we offer a little rhyming refrain: “Toota toota, khalasat el hadoota. Hilwa walla maltouta?” (The story is over. Was it nice or not?) The kids usually shout back, “Maltouta!” — meaning, “not nice” and that another story is in order.

On Tuesday, when I asked the question, Linah and Amal replied nervously, in unison: “Hilwa.” “Nice.” No more.

Most Gazans I know have barely gotten any rest since the beginning of the week. As my friend Hassan Arafat tweeted: “We do not sleep; we just faint with fatigue.” There are no high-tech warning systems here to alert us to incoming missiles or tell us to take shelter. We have to learn to read the patterns of Israel’s wanton strikes. Being a good parent in Gaza means developing a knack for what Israel’s drones and F-16s will do next.

On Wednesday night, after two hours of nonstop bombardment and Israeli missiles raining down all over the Strip — some landing just a few hundred meters away from our building — we finally managed to catch some sleep. The missiles shake the whole area for several seconds. Then you hear screams. Shouting. More screams. Whole families turf out onto the street. Our kids were all sat up in bed, shaking, saying nothing.

Then comes the intolerable indecision: I am caught between wanting to take the family outside, despite the missiles, shrapnel and falling debris, and staying at home, like sitting ducks for the American-made, Israeli-piloted planes. We stayed at home. At least we would die together, I thought.

The deafening strikes destroy Gaza’s infrastructure, cutting off roads leading to hospitals and water supplies, bringing down access to the internet. Many of the targets Israel hits have no strategic value. Israel knows this, and knows how it unnerves us. I wonder what those officers do in their command centers: Do they draw straws on which block to annihilate? Do they roll a dice?

Wednesday was the last day of Ramadan. The holy month of fasting ends with Eid al-Fitr, a celebration considered to be the second-happiest in Islam. Children traditionally wear new clothes and receive cash gifts and toys from relatives. Muslims in Palestine visit their families and eat together. Not this Eid, though.

By early Thursday, 69 people in Gaza were reported to have been killed in Israel’s airstrikes, including commanders of Hamas, the group that governs the Strip, and 17 children. At least seven Israelis, including one child, had died from the hundreds of rockets fired by Hamas.

In 2014, during the last war, Israel killed my brother Hamada; it destroyed my apartment when it brought down the family home that housed 40 people. It killed my wife’s grandfather, her brother, her sister and her sister’s three kids. We have not overcome that trauma yet. We have not finished rebuilding the homes Israel obliterated then.

Nusayba and I are a perfectly average Palestinian couple: Between us we have lost more than 30 relatives.

These days, as we lie in the darkness at night, I fear the worst — and I fear the best. If we come out of this alive, how will my children’s psyches fare in the years to come, living in constant dread of the next attack?

On Tuesday, Linah asked her question again after my wife and I didn’t answer it the first time: Can they destroy our building if the power is out? I wanted to say: “Yes, little Linah, Israel can still destroy the beautiful al-Jawharah building, or any of our buildings, even in the darkness. Each of our homes is full of tales and stories that must be told. Our homes annoy the Israeli war machine, mock it, haunt it, even in the darkness. It can’t abide their existence. And, with American tax dollars and international immunity, Israel presumably will go on destroying our buildings until there is nothing left.”

Refaat Alareer is the editor of “Gaza Writes Back” and a university professor of comparative literature, translation and creative writing.