We Longed<br> for the ‘Before <br> Times’

Our desire to return to ‘normal’
can obscure the root systems of pain lurking
beneath the romances of memory. 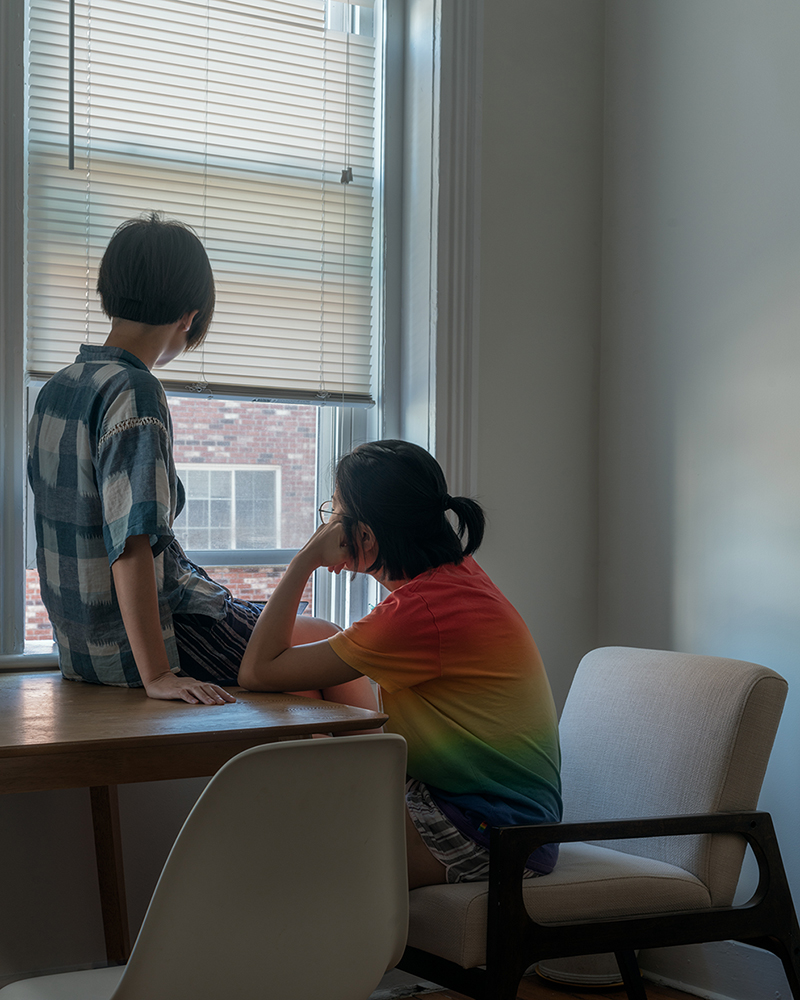 Yearning for the Before Times as a mythic era risks obscuring the ways in which the Before was really many different kinds of before.

Ms. Jamison is an essayist and novelist.

Last March, during the two and a half weeks I spent in quarantine — sick with a mild case of Covid-19 and sequestered with my young daughter — I religiously marked off the days until it would be safe for us to leave the apartment, daydreaming constantly about what it would be like: walking on the sidewalk beneath bare tree branches rattling in the wind, skin striped by cold sunlight, watching my toddler point at the purple door she loved across the street. But once the day of our freedom came, I delayed another day, and then another day after that. At the time, I told myself it was caution — wanting to make doubly, triply sure we were no longer infectious — but I think I was also loath to give up the horizon itself, the end of our sequestering. Some part of me knew I wouldn’t get another ending for a while.

During the year since, I have felt a strange nostalgia for those countdown days, when I had a timeline, at least, the outline of a plot with a beginning (getting sick), a middle (getting better) and an end (getting outside). As with most veins of nostalgia, however, this one is largely grounded in delusion.

Not only was the end of my isolation just the beginning of a much longer one; the stark truth is that New York City was apocalyptic in those days, the city literally dying, full of sirens and makeshift morgues, empty streets and hospitals overflowing past capacity. My recovery was one story among thousands of other stories full of ventilators, unemployment and death. As the pandemic has kept continuing — in its tedious, incessant, maddening, horrifying, catastrophic way, with 525,000 Americans dead — it has so far denied us the solace of a clear narrative arc.

Even as the vaccines offer hope, the news is full of waves and variants, surges and plateaus, uncertainty instead of solid timelines. The claustrophobia of this ongoingness — its lack of a clear plotline, its seemingly eternal present — has induced in many, including me, a kind of hysterical nostalgia for life in the Before Times, whatever memories that lost chapter holds for each of us: the sight of my daughter and my mother embracing, the unmasked faces of strangers on the sidewalk, the act of bending down to help a new mother lift her stroller across a muddy puddle, without worrying about her worrying that I’d breathe all over her baby.

But nostalgia is a sneaky curator. As the scholar Svetlana Boym wrote in her book “The Future of Nostalgia”: “There should be a special warning on the sideview mirror: The object of nostalgia is further away than it appears.” Yearning for the Before Times as a mythic era risks obscuring the ways in which the Before was really many different kinds of before. Longing for freedom and safety risks forgetting that neither mobility nor vulnerability has ever been democratically distributed. “Nostalgia is a sentiment of loss and displacement,” Dr. Boym observed, “but it is also a romance with one’s own fantasy.”

Nostalgia can be a valid catalyst for gratitude, illuminating sources of sustenance too easily taken for granted — touch, company, proximity — but without interrogation, it can also obscure the root systems of pain lurking beneath the romances of memory. The writers Fred Moten and Stefano Harney point out that this pandemic is embedded inside a continuing “general emergency” in which “the sirens have not stopped for 500 years.”

Your nostalgia for the Before Times is in part a barometer of how well they were serving you, how much you’ve been able to ignore the sirens that have been blaring the whole time.

Of course, there’s been a toll for everyone, even if those tolls have been different. We all miss forms of closeness thwarted by the pandemic — whether it’s the puzzle-piece proximity of curling up to watch a movie on the couch, brushing fingers in a bowl of buttery popcorn, or the sustenance of prison visiting-room hugs made impossible by lockdowns. But across the course of quarantine, I’ve grown increasingly distrustful of my own impulses toward projection and identification — have tried to stop assuming I know what the pandemic has been like for other people, that I can understand what they’ve lost, that I can presume to know what they ever had.

Though the word “nostalgia” combines the Greek words “nostos” (homecoming) and “algos” (pain), it was actually coined by a Swiss medical student named Johannes Hofer in 1688. First understood as a medical affliction, some of the earliest diagnosed cases were Swiss mercenaries working far from home who were particularly susceptible to pangs of longing when they heard traditional Swiss milking songs. The cultural nostalgia that has been a widespread psychic comfort food during the pandemic might seem primarily like a set of gestures reaching back toward the past: people binge-watching “Friends,” reaching out to exes, stocking up on classic board games like Monopoly (Hasbro reported a 15 percent increase in gaming revenue in 2020) and hitting drive-ins to see movies from decades ago, like “Jaws” and “Jurassic Park,” which topped box-office charts last Father’s Day weekend.

But remembering the past is also a way of believing that this moment will someday be the past. Which is to say, nostalgia for the past is also a way of believing in the future. Daydreaming about the After Times — the Before Times’s mythic counterpart — is in part an exercise in imagining what it will be like to look back at the pandemic. And imagining the time when we might have even the slightest glimmers of nostalgia for daily life during the pandemic — the wall hooks holding our masks or the makeshift shacks of outdoor tables filling the city streets — is a way of believing there will be a time when it’s finished, a time when we can look back and survey the entire arc of the story.

But of course, understanding the pandemic as an entirely discrete plotline, or a disruption, is another way of forgetting the sirens already blaring. There have been more than 2.6 million deaths worldwide from Covid-19; in 2019, more than eight million died from other infectious diseases. (Tuberculosis and other communicable respiratory infections like bronchitis and pneumonia killed 3.8 million people in that year.) A majority of these deaths were preventable; most of them occurred in the developing world. Which is to say, the coronavirus crisis feels acute to Americans in part because it’s happening here. When Americans are nostalgic for the Before Times, we aren’t nostalgic for a time before a disease crisis, but nostalgic for a time when that crisis was largely happening elsewhere.

In a diary written inside the Monroe Correctional Complex in Washington State last spring, Michael Murphy calls his prison “the petri dish,” describing how its conditions cause “residents to breathe the same air and share every virus that finds its way in.” Reading his account, I was struck by the way the pandemic has given a much broader population some fractional glimpse of a particular tension that has long been deemed an acceptable “normal” for incarcerated people: being isolated from other people and deeply vulnerable to other bodies at once. In certain ways, Covid-19 has only deepened and expanded the core logics of incarceration, the disregard for certain bodies we’ve labeled justice.

The protests that rose up last June — responding most immediately to the killing of George Floyd, and before him, Breonna Taylor and Ahmaud Arbery — were a necessary corrective to any easy sense of collective nostalgia. They were a corrective, certainly, to the delusion of its collectivity. What might nostalgia mean to someone terrified by normalcy? By the grinding machinery of the capitalist system or the smooth operations of American justice? Pushing back against the syntax of wanting things to “return to normal,” the protests demanded, instead, an interrogation of normalcy itself, tracing the Before Times back to a much longer history of violence, including the deaths of Trayvon Martin, Eric Garner and Aiyana Stanley-Jones, who was only 7 when a policeman shot and killed her in her sleep in 2010. Back to the long residue of American slavery — segregation, redlining, mass incarceration. Back to the Middle Passage itself. The sirens of 500 years.

The explosion of mutual aid groups early in the pandemic — one nonprofit tracked the rise of such groups from 50 in March of last year to more than 800 by May — is a useful example of what reflective nostalgia might look like. Mutual aid wasn’t anything new; it was rising from traditions that had been robust for a long time, in communities of color that hadn’t been well served by official structures. From the 1780 founding of the Free African Union Society in Rhode Island to the Black Panthers’ start of the free breakfast program in Oakland, Calif., in 1969, there’s a long history of networks like Bed-Stuy Strong that formed last year, delivering food and supplies to the vulnerable.

The activist Mariame Kaba has described mutual aid as a way of “prefiguring the world in which you want to live.” This future-facing prefiguration manifests one way that nostalgia isn’t destined solely to invite us into false romances with the past — it can also illuminate traditions that have long been operating in the margins.

Riding the subway this winter, sitting beneath posters commending New Yorkers for our diligent mask-wearing, I did feel truly moved by the sight of everyone still masked, nearly a year into the pandemic. As much as I missed the faces of strangers, I also saw in the simple physicality of the masks a tangible manifestation of collective care and an acknowledgment that all of our bodies depend on one another’s. But the sense of solidarity those masks suggested was only part of the story; the other part was a familiar one, about broken collectivity, continuing disparity and institutions failing the most vulnerable.

Many studies have shown the racial and social inequalities in coronavirus infections, hospitalizations and deaths: Between 2019 and the first half of 2020, Americans’ life expectancy dropped one year, largely because of the virus, but for Latinos it dropped 1.9 years and for Black people, 2.7 years. A variety of factors — including unequal access to health care, higher likelihood of having comorbidities and being employed at low-paying essential jobs — have led to Black, Latino and Native American people being hospitalized for Covid-19 at 2.9 to 3.7 times the rate, and dying at 1.9 to 2.4 times the rate, of white people. A recent analysis by the Kaiser Family Foundation found that across states reporting vaccinations by race or ethnicity, as of March 1 the vaccination rate among white people was 2.5 times that of Hispanic people and nearly twice that of Black people.

This pandemic is simultaneously something “we are all going through” and something we are all going through so differently that the phrase itself has become almost meaningless. Or at least, the fissures between our experiences are as important as the commonalities. Our delusions of solidarity rub shoulders (uneasily) with the delusions embedded in our nostalgia, and both sentiments ask us to reckon with certain abiding American fantasies about our past, our nation and our very different experiences of normalcy. We’re inside a singular historical moment illuminating truths that aren’t new at all: Even as we hunger for articulations of what we share, it remains just as necessary to recognize those burdens and freedoms that aren’t shared at all.

Leslie Jamison is an essayist and novelist.