The other day, my 7-year-old, having gotten wind of President Trump’s Covid-19 diagnosis, asked me point blank, “Mommy, are you glad that Trump got the coronavirus?”

I am a moral philosopher, and yet I had a hard time coming up with an answer. The question demands we grapple not only with the moral meaning of the president’s illness but also with our complex and contested reactions to it. To be clear, I am not debating whether it is morally wrong to wish for the president’s death. It is wrong. Full stop. Nevertheless, now that Mr. Trump has been declared healthy enough to return to work, I think it is important that we assess the moral significance of the positive reactions his run-in with Covid-19 has produced.

Mr. Trump’s diagnosis generated an immediate torrent of glee, gloating and schadenfreude on social media. It was followed by an equally quick and ferocious attempt to tamp it down. Joe Biden and Barack Obama, among other Democratic politicians, offered well wishes for the president and his wife, while left-leaning columnists rushed to wish them a speedy recovery. Many went on to admonish those rejoicing in the president’s misfortune, suggesting that such apparent meanspiritedness is but one more symptom of the moral rot that has come to consume our political culture.

While I agree that the gloating over Mr. Trump’s illness is morally concerning, I also find it fair to ask whether certain less celebratory but still positive reactions to his disease are entirely blameworthy and without moral merit.

It is generally accepted that Mr. Trump’s mendacious and reckless attitude toward the coronavirus, including his contempt for his government’s own public health guidelines, has helped lead indirectly but predictably to the deaths of hundreds of thousands of Americans. This is not to mention the individuals he directly and perhaps knowingly endangered once he had learned of his own diagnosis. In light of these catastrophic misdeeds, was it morally wrong to want Mr. Trump to suffer the consequences of his own callous incaution? 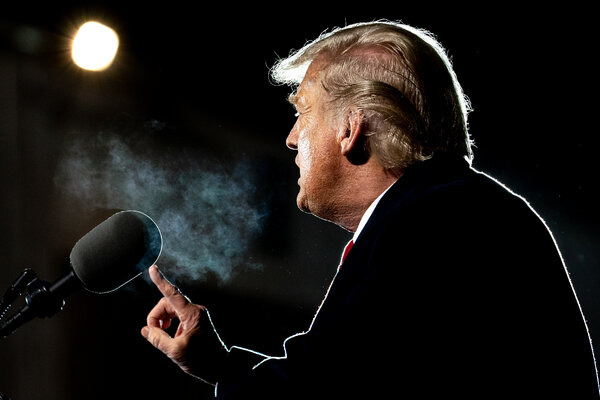 Ambivalent reactions to President Trump’s medical condition become more understandable when we appreciate that valid moral principles are often in tension with one another and can pull us in different directions. Condemning the pleasure that his misfortune has produced is certainly correct from one moral perspective, but there are also valid moral reasons to regard his illness as a potentially positive thing. Judging the moral meaning of Mr. Trump’s bout with Covid-19 — and our reactions to it — is no easy task.

The same bedrock moral principles — that life is sacred, that all people deserve to be treated with dignity and respect — make it wrong both to wantonly endanger others and to wish suffering and death upon any individual. We appeal to these principles in objecting to the glee and schadenfreude that engulfed Twitter in the wake of Mr. Trump’s diagnosis. From this perspective, it does not matter how morally corrupt he may be, nor the harms he has inflicted on others, wittingly or unwittingly, directly or indirectly. This is all beside the point when we consider that the president is a person with dignity or, as columnists more often put it, “a man with a family.” According to this line of thought, we should not wish to see Mr. Trump fighting for his life on a ventilator, no matter what he has done, and we are right to be concerned by attitudes that seem to contravene this principle.

But while it is true that life is sacred, and we must honor the dignity of all persons, including Mr. Trump, society also has a legitimate moral interest in seeing wrongdoers face consequences for their actions. The sense that justice requires punishment for wrongs runs deep and is not the same as a mere thirst for revenge or a desire to get even.

On the contrary, punishment plays an important role in any healthy moral ecosystem. When the moral order has been ruptured, punishment for wrongs helps to repair tears to the social fabric and to reinforce the validity of the moral expectations that were violated. Imagining Mr. Trump’s illness as a metaphorical punishment for his misdeeds helps to satisfy at the level of fantasy a legitimate need to see justice done. Because Mr. Trump contributed to the illness and death of so many Americans, it is understandable that many feel satisfied in seeing him forced to contend with a harm to which he has exposed so many others.

The moral complexity becomes greater still when we consider that from a purely consequentialist point of view, there are reasons to view Mr. Trump’s potential incapacity as the best moral outcome. Most famously associated with the utilitarianism of Jeremy Bentham and John Stuart Mill, consequentialism is the philosophical position that affirms that what is morally right is whatever makes the world best in the future. If one believes that Mr. Trump has unleashed a tremendous amount of suffering and death through his mismanagement of the coronavirus pandemic and that he is likely to continue causing harm on this scale, a consequentialist argument can be made that his speedy recovery from Covid-19 would not be the best moral outcome.

The consequentialist argument, while repugnant from the perspective of human dignity, tells us that a world in which Mr. Trump is unable to commit harm would be morally better than a world in which he continues to harm freely. This philosophical approach to weighing moral outcomes conflicts with the principle of individual human dignity and offers no easy guideline for reconciling these powerful yet opposing ways of thinking about what is best.

So where does this leave us?

Can those who rejoice in Mr. Trump’s misfortune claim the moral high ground? Not so fast. Those who regard Mr. Trump as the enemy may simply wish to see him suffer. Such a wish may be entirely untethered from concerns about justice or the consequentialist moral appeal of a world where he is too ill to campaign effectively. For these reasons we are right to be skeptical of their reaction. Moreover, the principle of human dignity tells us that even the president, for all the wrong he has done, deserves our good will.

Here’s how I explained the moral quandary to my 7-year-old: I am sad that Mr. Trump got sick because in general suffering is bad, and I don’t want anyone to suffer, but on the other hand I think he should suffer consequences for the harm he has done. This answer seemed satisfying enough at the time, but it left out an important distinction.

What I did not try to explain is that the punishment that Mr. Trump’s bout of Covid-19 represents is merely symbolic, a stand-in for the real punishment he deserves, which is necessarily social in character. Mr. Trump deserves to be punished at the ballot box and to be held accountable for any possible criminal wrongdoing in a court of law.

I hope that after experiencing firsthand the illness that has killed so many people and devastated the lives of so many others, the president will think better of his cavalier attitude. It seems, so far, that he hasn’t. Nevertheless, I hope Mr. Trump returns to good health. I hope this both because Donald Trump is a human being with dignity, and also because the world needs this president to get his real just deserts.

Now in print: “Modern Ethics in 77 Arguments” and “The Stone Reader: Modern Philosophy in 133 Arguments,” with essays from the series, edited by Peter Catapano and Simon Critchley, published by Liveright Books.