New York City voters will head to the polls tomorrow to pick the Democratic and Republican candidates for mayor. The Democratic contest is, essentially, the mayoral election — in a deep blue city like New York, the Democrat will probably win in November.

The job of running the country’s biggest city is always consequential. But the election this year carries more weight: It’s one of the first major contests to be held as the pandemic recedes, and it could be a bellwether for Democratic sentiment on issues like police reform, housing and education.

A day before the election, it’s still anyone’s race. Polling has been scant, and the introduction of ranked-choice voting (which David Leonhardt wrote about last week) has made the outcome difficult to predict.

With help from Katie Glueck, who covers New York politics for The Times, we’ve put together a primer.

“The New York Democrats running for mayor are in general quite progressive compared to Democrats elsewhere in the country, but there are some clear political differences between the candidates, especially when it comes to issues like policing, real estate and the business community,” Katie says.

There are eight leading candidates:

Eric Adams, the Brooklyn borough president and a former city police officer. Endorsed by: The New York Post’s editorial board and a major service workers’ union.

Shaun Donovan, a former housing secretary in the Obama administration. Endorsed by: Mitch Landrieu, the former mayor of New Orleans.

Kathryn Garcia, a former Sanitation Department commissioner. Endorsed by: The Times’s editorial board and several teamster and sanitation unions.

Andrew Yang, a former presidential candidate and nonprofit executive. Endorsed by: the police captains’ union and the firefighters’ union.

Adams, Garcia and Stringer all came up through city government or local politics. “They are making the argument that to get anything done, you need to know how to navigate a sprawling bureaucracy with complications at every turn,” Katie said.

Then there are candidates who fashion themselves as outsiders. Wiley has won the backing of high-profile progressives, while Morales is seeking to be the standard-bearer of the grass-roots left (though her campaign has struggled with internal dysfunction). McGuire is making the case that he’s the outsider businessman who can best revive the economy. And Yang may be the ultimate outsider: Not only has he never worked in city government, he has never voted in a New York City mayoral election. 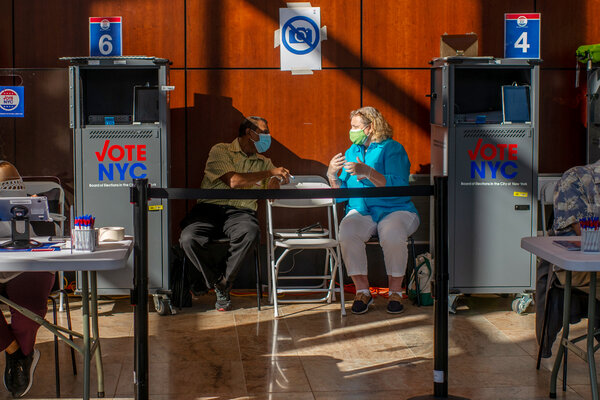 What are the top issues?

The next mayor will lead New York City out of the pandemic. The task involves nearly every part of government, from education to evictions to economic revival.

But the clearest ideological divide may be on policing, an issue pushed to the forefront by both the national protest movement and the recent spike in crime. “Public safety has become a defining issue of this race,” Katie said.

Adams, Garcia and Yang prefer a relatively moderate approach, advocating some reforms but calling for the police to have a more expansive role in public safety. Stringer, Wiley, Donovan and Morales have all talked in varying degrees about cutting the Police Department’s budget and focusing on mental health and other social services. Here’s where each candidate stands.

Here’s a look at the candidates’ positions on everything from climate change to bagel orders.

The two Republican candidates are Curtis Sliwa, the founder of the Guardian Angels, and Fernando Mateo, a restaurant operator.

This tool from The City, a nonprofit news organization, matches voters with candidates. (And Times Opinion has a strategy to maximize your ballot’s effectiveness.)

Because of the ranked ballots, we may not know the winner for weeks. And here’s how the leading candidates spent the campaign’s last weekend.

Which candidate do the billionaires want? Follow their money.

Singapore is allowing the Chinese-made Sinovac shot at private clinics, while casting doubt on its effectiveness.

Brazil’s official Covid death toll, one of the highest in the world, has surpassed 500,000.

The Tokyo Olympics will allow spectators (if they live in Japan, and with restrictions).

How Representative Liz Cheney, once Republican royalty, became an outcast.

The U.S. is preparing more economic sanctions against Russia over the poisoning of the opposition leader Aleksei Navalny.

Tropical Storm Claudette is battering parts of North Carolina. It killed at least 12 people in Alabama over the weekend.

The Taliban entered two cities in Afghanistan. The U.S. withdrawal will leave Afghan troops without support to stop such offensives.

George Clooney and other celebrities are starting a public high school in Los Angeles.

In golf, Jon Rahm won the U.S. Open by a single stroke in a dramatic finish.

Disappearance: His father vanished when he was 7. He didn’t think the mystery would be solved.

Quiz time: Have you taken our latest news quiz?

A Times classic: The 20 best TV dramas since “The Sopranos.”

Though Twitch began as a site to livestream video games, it has recently gained popularity among musicians. That’s because for small or niche artists, the platform can be more lucrative than traditional services like Spotify and YouTube.

On Twitch, musicians who average a few hundred viewers at any given time can earn about $50,000 a year. On major audio streaming platforms, that payout might take five million to 10 million streams.

What makes Twitch ideal for smaller musicians is the connection it enables between performers and their audiences. “Fan interactions — which pour across the screen in a river of song requests, inside jokes and ‘emotes’ (Twitch-specific emoticons) — are as much a part of the show as the artist onscreen, conveying the sense of a tightly knit, mutually supportive community,” Ben Sisario writes in The Times.

That fan support can translate to income through monthly subscriptions or donations — akin to a street musician’s tip jar.

It also requires a lot of effort. Musicians must maintain engagement with their audiences by making content regularly, going online several times a week for hourslong stretches. One economist told The Times that it was like operating a taxi: You make money as long as the meter is running.

Here to save your weeknights: honey-soy braised pork, a slow-cooker main that’s truly “set it and forget it.”

Take a trip to the Italian coast in Pixar’s “Luca,” a charming sea-monster story.

The pangrams from Friday’s Spelling Bee were maritally, martially, militarily and military. Here is today’s puzzle — or you can play online.

David Leonhardt is off this week. He’ll be back on Monday, June 28. See you tomorrow.

P.S. The first Ferris wheel, created by George Washington Gale Ferris Jr. for the Chicago World’s Fair, opened 128 years ago today. “Nobody was afraid to get on board,” The Times reported, but some “experienced a disagreeable sensation in the motion of the wheel.”

Claire Moses, Ian Prasad Philbrick, Tom Wright-Piersanti and Sanam Yar contributed to The Morning. You can reach the team at [email protected].