Want to get The Morning by email? Here’s the sign-up.

Good morning. Voting rights or the filibuster? Democrats will probably have to choose. 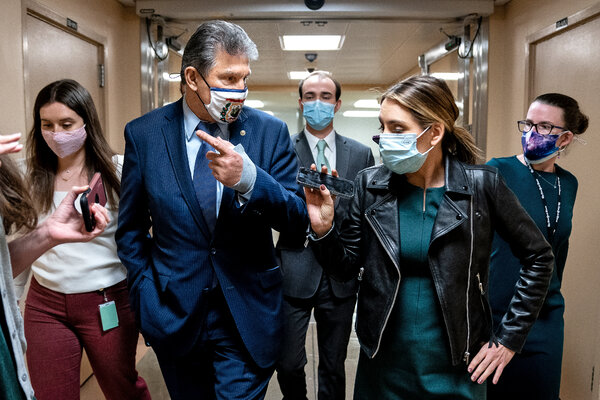 They are now almost certain to face that decision.

Republican legislators in dozens of states are trying to make voting more difficult, mostly because they believe that lower voter turnout helps their party win elections. (They say it’s to stop voter fraud, but widespread fraud doesn’t exist.) The Supreme Court, with six Republican appointees among the nine justices, has generally allowed those restrictions to stand.

“I don’t say this lightly,” Michael McDonald, a political scientist at the University of Florida, recently wrote. “We are witnessing the greatest roll back of voting rights in this country since the Jim Crow era.”

The only meaningful way for Democrats to respond is through federal legislation, like the voting-rights bill that the House passed on Wednesday. Among other things, it would require states to register many eligible voters automatically; allow others to register on Election Day; hold at least 15 days of early voting; expand voting by mail; and allow people with completed criminal sentences to vote. The bill also requires more disclosure of campaign donations and restricts partisan gerrymandering.

But the bill seems to have no chance of winning the 60 votes in the Senate needed to overcome a filibuster. The Senate is divided 50-50 between the two parties (including two independents, who usually vote with Democrats). The bill will pass only if all 50 Senate Democrats agree to scrap or alter the filibuster, as they have the power to do.

“Proponents of eliminating the filibuster have said all along that their best opportunity to do so would come on a civil-rights bill, and this is the modern version,” Carl Hulse, The Times’s chief Washington correspondent, told me.

As Carl explained: “They intend to ratchet up the pressure on Democratic holdouts to overturning the filibuster by saying Republicans are using undemocratic means to hold up urgent protections for our democratic system. The votes still aren’t there, but opponents of the filibuster believe they are gaining ground.”

The swing votes include Joe Manchin of West Virginia and Kyrsten Sinema of Arizona, two of the most moderate Democratic senators, who have both expressed support for the filibuster.

Status quo? Not an option.

The stakes involve both small-d democratic principles and partisan power. If the Senate does not pass a voting-rights bill, large numbers of Americans may find voting so difficult that they are effectively disenfranchised. And Republicans may enjoy a large built-in advantage for years to come, preventing Democrats from holding power and passing laws on climate change, Medicare, taxes, the minimum wage and more.

“If we don’t pass a redistricting reform, our chance of keeping the House is very low,” David Shor, a Democratic strategist, told New York magazine.

Shor noted that gerrymandering has already helped create a situation in which Democrats don’t just need to win the national popular vote to hold House control; they need to win it by more than three percentage points. He also argued that a fight over voting rights and gerrymandering would benefit the party politically in the 2022 campaign.

There does not appear to be a compromise path on this issue. Democrats can overhaul the filibuster — and, by extension, transform the Senate, ushering in an uncertain era in which both parties would be able to pass more of the legislation they favor. Or Democrats can effectively surrender on voting rights. It’s one or the other.

Ronald Brownstein in The Atlantic: “Future Americans could view the resolution of this struggle as a turning point in the history of U.S. democracy. The outcome could not only shape the balance of power between the parties, but determine whether that democracy grows more inclusive or exclusionary.”

Ella Nilsen of Vox and the staff of the Brennan Center for Justice have each summarized the House bill.

Stacey Abrams talks about voting rights on the latest episode of “Sway.” And on “The Argument,” Jessica Anderson of Heritage Action for America makes the case for the filibuster, saying that it hasn’t prevented the two parties from passing big parts of their agendas in recent years.

It’s only a few days of data, but the number of Covid cases has begun falling again in the U.S. and worldwide.

The vaccination rate for Black Americans is half that of white people, according to a Times analysis.

What good are billions of vaccine doses if you can’t inject them? Factories that make syringes are ramping up to meet demand.

The Senate is on track to pass President Biden’s pandemic relief bill soon.

Senator Ron Johnson, a Wisconsin Republican, delayed the process by requiring the Senate legislative clerk to read the 628-page bill, which has more than 100,000 words, out loud.

Among the changes that the Senate has made to the House bill: more generous subsidies for health insurance.

The F.B.I. arrested a former State Department aide over involvement in the attack on the Capitol.

The Biden administration plans to release many migrant families within 72 hours of their arrival in the U.S. — more quickly than the Obama and Trump administrations did.

A Japanese billionaire is looking for eight people to accompany him on a weeklong trip to space. He’s taking applications.

A Morning Read: The moon has a comet-like tail, but you can’t see it with your human eyes.

Modern Love: When her parents divorced, a 15-year-old lost the link that held her family together.

Lives Lived: Henry Goldrich was the longtime owner of Manny’s Music, the Midtown Manhattan store favored by Jimi Hendrix, Eric Clapton and other musicians searching for equipment. He died at 88.

Many people are eagerly awaiting CBS’s Sunday night broadcast of Oprah Winfrey’s interview with Prince Harry and Meghan, the Duchess of Sussex. You may wonder: What’s the big deal?

The Oprah interview is highlighting the fraught relationship between the couple and the rest of the royal family. Last year, Harry and Meghan announced that they would give up their official royal duties, split their time between Britain and North America and “work to become financially independent.” The move “underscored the deep personal rupture” in the family, according to The Times’s Mark Landler.

Both sides are “maneuvering furiously” to shape the narrative before the interview airs, Landler says. CBS has released a clip in which Meghan accuses the palace of “perpetuating falsehoods.” Buckingham Palace said this week that it would investigate allegations that Meghan had bullied royal staff members.

“To some extent, the charges and countercharges represent a clash of cultures,” Landler writes. “The old-fashioned press leaks of the British media — long used by members of the royal family or their allies to settle scores — versus the publicity machine of an American television network and one of the nation’s most powerful media personalities.”

This cauliflower Parmesan is the winter analogue to eggplant Parmesan. (Broccoli also works.)

“The SpongeBob Movie: Sponge on the Run” follows the residents of Bikini Bottom, this time in C.G.I. animation. “It’s like inserting LED lights directly into your eyeballs,” the critic Maya Phillips writes.

Use these tutorials to learn dance routines at home.

The hosts discussed the reading of the stimulus bill.

What prompted sanctions on Russia? Take this week’s News Quiz, and compete with other Times readers.

The pangrams from yesterday’s Spelling Bee were hateful and healthful. Here is today’s puzzle — or you can play online.

Here’s today’s Mini Crossword, and a clue: Things that can be clicked nervously (four letters).

Thanks for spending part of your morning with The Times. See you Monday. — David

P.S. A hidden haiku by our colleague Melissa Kirsch, who writes the At Home newsletter: “I don’t want this year / to turn into a blur of / Zoom chats and Netflix.”

Claire Moses, Ian Prasad Philbrick, Tom Wright-Piersanti and Sanam Yar contributed to The Morning. You can reach the team at [email protected].