Vaccine diplomacy from China and India. 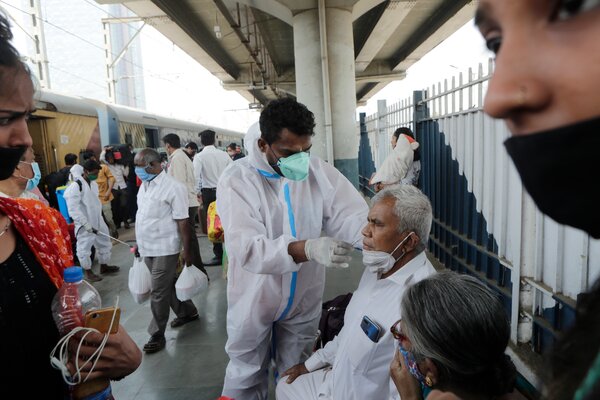 Vaccines become a tool in diplomacy

China, India and other countries are using Covid-19 vaccines to gain favor or thaw relations with allies.

India, a vaccine manufacturing power, is giving away millions of doses to neighbors. The aid is aimed at countering China, which has made doling out shots a plank of its foreign relations. And the United Arab Emirates, drawing on its oil riches, is buying shots on behalf of its allies.

The strategy carries risks at home: India and China have huge populations in need of vaccines. “Indians are dying,” said a fellow at a New Delhi think tank. “Indians are still getting the disease.”

Recipients: One of India’s largest donations has been to Nepal, which has increasingly fallen under China’s influence. Sri Lanka, caught in a tug of war between Beijing and New Delhi, is getting doses from both.

Malaysia, one of the Emirates’ biggest trading partners, declined an offer of 500,000 doses that the U.A.E. had purchased from China. Malaysia instead bought vaccines from AstraZeneca, the U.S. drug maker Pfizer, and some made by the Chinese company Sinovac.

Former President Trump was sicker with Covid-19 in October than publicly acknowledged at the time, with extremely depressed blood oxygen levels at one point and a lung problem associated with pneumonia caused by the coronavirus, according to four people familiar with his condition.

Sister André, a nun who beat Covid-19 with barely any complications, turned 117 on Thursday.

The coronavirus has been used as an excuse to restrict free speech in dozens of countries, according to a new report by Human Rights Watch.

On the third day of former President Donald Trump’s impeachment trial, the Democrats prosecuting the case argued that his “lack of remorse” suggested he would stoke fresh violence if not barred from holding office again. The prosecution is wrapping up its case. Here’s the latest.

The prosecutors opened the day by showing new video clips, court documents and media interviews in which the rioters who attacked the Capitol on Jan. 6 defended their actions by citing Mr. Trump’s directives.

The statements: A member of a militia group told an associate she was “awaiting direction from President Trump” about what to do about election results. “We were invited here,” one of the rioters screamed, the clip echoing through the Senate chamber.

New info: On Wednesday, the senators were shown previously unseen footage of the attack captured by security cameras in the Capitol. Senators Mitt Romney, a Republican, and Chuck Schumer, a Democrat, can be seen in videos running to safety after narrowly missing the mob.

Next, Mr. Trump’s defense lawyers will present their case. Here’s a step-by-step guide to the trial.

Analysis: If Mr. Trump is not convicted for inciting the attack on the Capitol, the managers want to ensure that he remains so politically radioactive that he cannot be the same force he once was — but rather a figure that mainstream Republicans and their donors keep at arm’s length.

China’s broadcasting regulator announced on Friday that the BBC will be banned from airing its programs in China. It accused the British news service of biased and inaccurate reporting.

The announcement from China’s National Radio and Television Administration did not specify which news reporting was found to have violated Chinese rules. But for days Chinese officials and state media have complained about BBC reports on Xinjiang, the western region of China where Muslim minorities have endured detentions and draconian controls.

Details: The ban will affect a limited number of viewers with access to the BBC through satellite services for international hotels and residential compounds mostly populated by foreigners.

When Joe Biden left office as vice president four years ago, anxiety about nuclear weapons was low, save for North Korea. But after four years of Donald Trump, President Biden has returned to a world filled with nuclear dangers. Above, a monument in Moscow to the Soviet Union’s first mass-produced tactical nuclear bomb.

Russia, China and North Korea are all modernizing their nuclear arsenals, and Iran has resumed enriching uranium as part of its nuclear program. Experts warn that Mr. Biden has to make arms control a priority, or risk an arms race that threatens the Middle East, Europe and Asia.

Tokyo Olympics chief: Yoshiro Mori, a former Japanese prime minister, is expected to resign from his role heading the Olympic committee. He had complained that women cause meetings to run long by talking too much.

Australian Open: Sofia Kenin, the reigning champion, was knocked out of the tournament on Thursday as the unseeded Kaia Kanepi of Estonia beat her, 6-3, 6-2. Here’s what to watch today.

Meghan and Harry: In a victory for Prince Harry and his wife, Meghan, in their feud with the British tabloids, a High Court judge ruled on Thursday that The Mail on Sunday had invaded Meghan’s privacy by publishing a private letter she had sent to her father.

Snapshot: Above, a Bangkok market decorated for the Lunar New Year holiday on Thursday. Chinese people around the world are celebrating the Year of the Ox in more subdued ways because of coronavirus restrictions.

What we’re listening to: The Radio Garden website. “This flat-out astounding website lets you tune in to radio stations from Toledo to Tbilisi to Tashkent,” said Michael Wines, a national correspondent.

Cook: Always elegant, this dark chocolate mousse with candied ginger is not at all difficult to make, and it can be prepared up to two days in advance.

Watch: El Yiyo grew up in Spain’s Roma community, but it was watching Michael Jackson online that taught him to dance. Now his flamenco videos on YouTube blend genres and move beyond the classical form.

Do: Get your front-row seat to virtual fashion shows: Here’s what to watch during the New York, London, Milan and Paris digital fashion weeks.

Let us help you get ready for the weekend. At Home has our full collection of ideas on what to read, cook, watch, and do while staying safe at home.

David Kaye, a law professor and former United Nations special rapporteur on freedom of expression, spoke to our On Tech newsletter about Twitter’s decision to block accounts in India, at the government’s request. Twitter has complied with some of India’s orders, but has refused to remove accounts of journalists, activists and others that the company says are exercising their right to criticize Prime Minister Narendra Modi’s government.

Do you think Twitter is making the right call?

Yes. Twitter is essentially saying that it won’t comply with orders it considers inconsistent with Indian law and that violate people’s human right to free expression.

Under the Modi government, India hasn’t acted democratically on the rights of people to speak out against their government. I’m not sure why Twitter chose this moment to take a stand and not two or three years ago, when the company took action against people posting about Kashmir after pressure from the government.

How should we feel that a few internet companies have the power to shape citizens’ engagement with their governments and set the bounds of appropriate expression?

It’s a problem. These companies have massive and largely unaccountable power. The fundamental question is: Who decides what is legitimate speech on these platforms? We have perpetual cycles of what look like seat-of-the-pants decisions in response to public pressure. And governments have largely not done the hard work to create smart regulation.

The challenge for democratic governments is to enhance the transparency of social media and put it under a regulatory framework — but not impose content rules that are abused and interfere with the free speech rights of users or the rights of companies to create an environment that they want for users. That’s the persistent tension.

Thank you
Carole Landry helped write this briefing. Theodore Kim and Jahaan Singh provided the break from the news. You can reach the team at [email protected]

P.S.
• We’re listening to “The Daily.” Our latest episode is on Victor Rivera, the head of a network of shelters in New York, who is accused of abuse.
• Here’s our Mini Crossword, and a clue: Emmy or Grammy (five letters). You can find all our puzzles here.
• Jia Lynn Yang, who was deputy National editor, will become our new National editor.