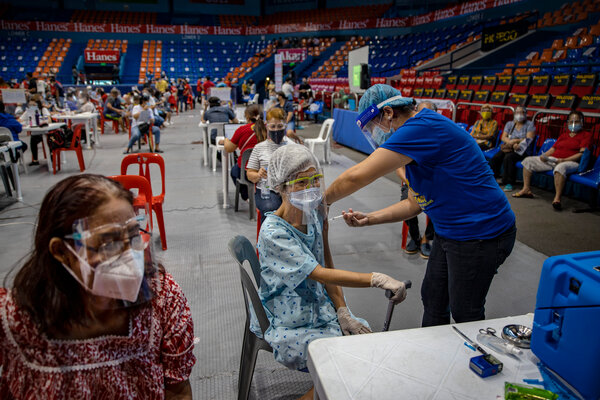 A day after E.U. regulators described a possible link between AstraZeneca’s Covid-19 vaccine and rare blood clots, more countries halted the use of what is now the world’s most widely used vaccine.

Cameroon, the Democratic Republic of Congo, Denmark and Norway have suspended its use altogether. The Philippines said it would temporarily stop administering it to people age 60 and under. Belgium said it would stop for those under 56. Australia now recommends that adults under 50 receive an alternative vaccine.

South Korea will decide this weekend if it will resume administering the shot to those 60 and younger. E.U. regulators have said that its benefits outweigh the risks for most people.

Slovakia, one of only two E.U. countries that have signed up to use Russia’s Sputnik V vaccine, reported that the doses it received are different from the version peer-reviewed in a respected British medical journal.

The Centers for Disease Control and Prevention acknowledged that the risk of coronavirus infection from surfaces was low.

Tokyo’s governor asked Japan’s central government to impose emergency restrictions in the city as infections surge just over 100 days before the Summer Olympics are scheduled to begin.

Describing America’s gun violence as an “epidemic” and an “international embarrassment,” President Biden announced his administration’s first steps to curb it.

Mr. Biden said the Justice Department would clamp down on “ghost guns,” kits that allow a gun to be assembled with no serial numbers. More than 10,000 ghost guns were recovered in 2019. Mr. Biden said that he would require restrictions to be applied when a device marketed as a stabilizing brace transforms a pistol into a short barrel rifle, as was the case in the Boulder, Colo., shooting last month.

The Justice Department will also publish model “red flag” legislation for states, which would allow police officers and family members to ask a court to temporarily remove firearms from people who may present a danger.

“This is just a start,” Mr. Biden said. He pressed Congress to close loopholes on background checks of potential gun buyers, ban assault weapons and strip gun manufacturers of protection from lawsuits.

Context: Gun violence remains the leading cause of death for Black men between the ages of 15 and 34. Homicides spiked in the U.S. in 2020, with the trend continuing in early 2021.

After two months of sexual harassment and assault scandals, including a claim of a rape inside Parliament House, Prime Minister Scott Morrison unveiled a “road map for respect” for the country’s public and private sectors.

Mr. Morrison said his government adopted all 55 recommendations from the country’s Sex Discrimination Commissioner “in whole, in part, or in principle,” wording that led many women to demand more details and a clear timeline.

Details: The plan promises new legislation to end exemptions for judges and members of Parliament from the country’s sex discrimination law, which critics say has allowed lawmakers to act with impunity and made Parliament House an unsafe, sexist backwater. It includes more education in schools, and would allow victims to file complaints for up to two years after an attack.

Myanmar’s envoy to Britain was locked out of his own embassy after criticizing the military coup.

Taiwan’s drought, the worst in more than 50 years, is pitting farmers against the country’s huge semiconductor industry.

A hastily crowdsourced response quashed last year’s wave of locusts in East Africa, with lessons for climate-driven natural disasters around the world.

A South Korean man was sentenced to 34 years in prison for running a sexual-exploitation chat room, as the country continues its crackdown on an infamous network.

Activists in Pakistan have accused Prime Minister Imran Khan of “baffling ignorance” and victim-blaming after he said rape cases had risen because of “vulgarity.”

France is facing its delayed #MeToo reckoning. Since the beginning of this year, powerful men in politics, sports, the news media, academia and the arts have faced public accusations of sexual abuse after years of silence. The accusations have resulted in a rethinking of French masculinity and the archetype of Frenchmen as irresistible seducers.

“Love is a slippery and intangible thing,” the novelist Celeste Ng writes in an essay for The Times.

It’s captured in moments both striking and ordinary: parents driving an hour and a half to visit children and replenish their fridge, a young couple riding a motorbike at night, a sleeping child surrounded by toy dinosaurs.

In the wake of swelling anti-Asian violence and harassment in the U.S., nearly 30 Asian and Asian-American photographers shared what love looks like in their lives.

The photos come from Oregon, Hawaii, Georgia, Taiwan, Japan and beyond. There are glimpses of food, texts and emails from friends, loved ones dozing off — the “small, everyday, mundane things that add up to what I’ve come to understand as love,” as An Rong Xu, a photographer, writes.

Take some time with the photo essay here.

This brothy cod with peas and mushrooms optimizes bottled clam juice, a versatile yet underused ingredient.

What To Listen To

“Now,” the new album from Damon Locks and the 18-member Black Monument Ensemble, is a spiritual, funky reaction to the events of 2020.

With a little know-how, you can approximate the Japanese practice of shinrin-yoku, or forest bathing, indoors.

That’s it for today’s briefing. See you next time. — Whet

P.S. John Eligon, a National correspondent who has covered race and inequality in the U.S., will be our new Johannesburg bureau chief.

The latest episode of “The Daily” is on the Derek Chauvin trial.

Sanam Yar contributed to this briefing. You can reach Whet and the team at [email protected].