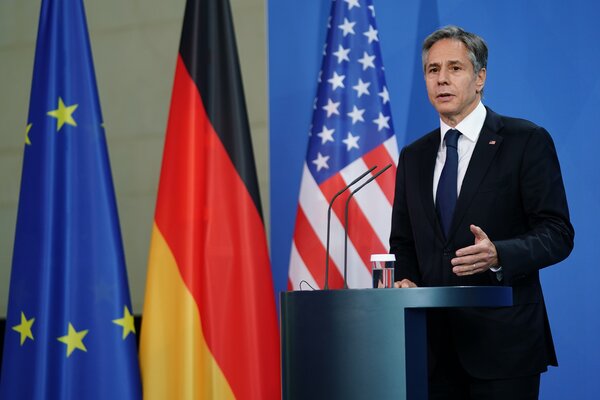 Why can’t Europeans travel to the U.S.?

Though Americans have been able to travel to the E.U. since June, residents of Europe’s Schengen area, Ireland and the U.K. have been essentially barred from traveling to the U.S. since March 2020. The C.D.C. has also halted travel from some non-European countries: China, Iran, Brazil, South Africa and India.

Discussions about when to resume that inbound travel have been opaque. Both Secretary of State Antony Blinken and Transportation Secretary Pete Buttigieg have said the U.S. was not ready to lift the restrictions, while President Biden quickly rescinded Donald Trump’s move to end to the ban during his last week in office.

Officials said decisions would be made according to vaccination progress and the spread of worrisome variants in other countries. But travel lobbying groups have urged the U.S. to reopen travel to bolster the economy or to consider creating an exception for vaccinated people. Here’s a country-by-country guide to restrictions within Europe.

Promising signs: “Reciprocity is an important part of our approach to lifting restrictions on non-E.U. countries,” Adalbert Jahnz, a European Commission spokesman, said in a statement. He added that the E.U. had “received reassurances that this is a high priority issue for the U.S. administration.”

Other travel news: Confusion over airline travel credits. The return of a 2,500-passenger ship to the Venetian Lagoon reanimates the debate on the negative effects of mass tourism. And, as vaccination levels rise, sober travel goes mainstream.

From Opinion: The pandemic has presented the world with an opportunity to reset how we tour this planet, and we should reach for it, writes Farhad Manjoo.

Africa has just had its “worst pandemic week ever,” the W.H.O. said on Thursday. The continent is short of vaccines, and the virus’s more contagious Delta variant is sickening its young people and overwhelming its already fragile health care systems.

In countries mainly in southern and eastern Africa, hospitalizations and deaths are increasing, while intensive-care beds and oxygen are in short supply, pushing governments to institute new lockdown measures. Uganda, Rwanda and Kenya are among the countries most affected.

“A few weeks ago, we projected this milestone would be reached shortly, and it brings me no joy to be right,” said Dr. Matshidiso Moeti, the W.H.O. regional director for Africa. “For Africa, the worst is yet to come,” she warned. “The end to this precipitous rise is still weeks away.”

By the numbers: More than 251,000 new cases were reported in Africa in the week ending July 4, a 20 percent increase from the previous week. Sixteen countries are reporting a resurgence in infections. Only about 1 percent of the total population is fully vaccinated.

Olympic organizers said that they would bar spectators from most events at the Games.

Pfizer and BioNTech are developing a version of the coronavirus vaccine that targets the Delta variant.

In a speech that acknowledged that America could not alter Afghanistan’s course, Biden argued that the U.S. could no longer afford the human costs. “We did not go to Afghanistan to nation build,” he said. “And it’s the right and the responsibility of Afghan people alone to decide their future and how they want to run their country.”

Plans: The Biden administration has committed more than $3.5 billion in humanitarian aid and security assistance to Afghanistan. But as U.S. troops leave, the situation on the ground is increasingly dire. Over two months, the Taliban have seized at least 150 of Afghanistan’s 421 districts.

Related: Britain has withdrawn nearly all of its troops from Afghanistan, Prime Minister Boris Johnson said.

Two American citizens and 15 Colombians have been detained in the assassination of President Jovenel Moïse. Here’s what we know, and what we don’t know. Above, Haitians surrounding a police station where two suspects were taken.

Despite the interim prime minister’s claim that he is in charge after the president’s assassination, the country risks a deepening political crisis.

Since a powerful earthquake devastated Haiti in 2010, $13 billion of foreign aid seems only to have helped perpetuate some of the country’s biggest troubles. The country has for centuries been exploited by foreign powers.

Stories Around the World

A Leonardo da Vinci sketch the size of a Post-it sold for £8.9 million with fees, or about $12.2 million.

Search teams in Surfside, Fla., have officially changed their mission from a rescue operation to a recovery effort. By yesterday, the death toll had risen to 64.

A major Chinese video game company says it has been using facial recognition to enforce the country’s rules on how long people under 18 could play games.

After reaching the final of a major soccer tournament for the first time in 55 years, England is hungry for victory. Above, fans celebrating Wednesday in London after England won in the semifinals of the Euros.

Ashleigh Barty and Karolina Pliskova will face off in the Wimbledon women’s final on Saturday. Denis Shapovalov will play Novak Djokovic in a men’s singles semifinal today.

The lawyer Michael Avenatti, who once represented Stormy Daniels, was sentenced to two and a half years in prison for trying to extort more than $20 million from Nike.

Pope Francis has often mused about his own mortality and even possible resignation. But as he recovers from surgery — and races to recast the church — time is of the essence more than ever.

The beloved television star Raffaella Carrà spent five decades beaming into the homes of Italians. Public mourning for her has few precedents in Italy.

It’s been 20 years since the feminist masterpiece “Legally Blonde” cemented Reese Witherspoon’s status as a Hollywood star. The film’s heroine, Elle, who gets into Harvard Law against all odds, remains an emblem for challenging stereotypes and embracing female empowerment in the face of misogyny.

For The Times, the reporter Ilana Kaplan spoke with the film’s stars, screenwriters and others about the movie and its legacy.

Aside from differences in plot, the original script was much raunchier and more in the vein of “American Pie,” said the actress Jessica Cauffiel. “It transformed from nonstop zingers that were very adult in nature to this universal story of overcoming adversity by being oneself.”

The writers spent time at law school and in a sorority house for script inspiration. But other parts of the movie were developed more organically — like the infamous “bend and snap” scene, conceived while the writers were drinking at a hotel bar.

Even 20 years later, fans constantly remind the cast and crew how the movie affected them. “You see this undeniable force and that Elle never lets her self-doubt take her down,” said Ali Larter, who played a fitness instructor on trial for murder. “When you watch a movie like this, you believe in yourself a little bit more.”

For a weekend treat, try this peach-filled dessert, a lush combination of a Southern upside-down cake and a tarte Tatin.

We collected 15 challenging words that appeared in The Times. How many can you spell correctly?

The art house South Korean drama “The Woman Who Ran” is the work of a master.

That’s it for today’s briefing. Have a great weekend. — Natasha

P.S. Our Opinion editor, Kathleen Kingsbury, recently participated in a Reddit AMA about the Opinion section.

The latest episode of “The Daily” is on the end of America’s 20-year war in Afghanistan.