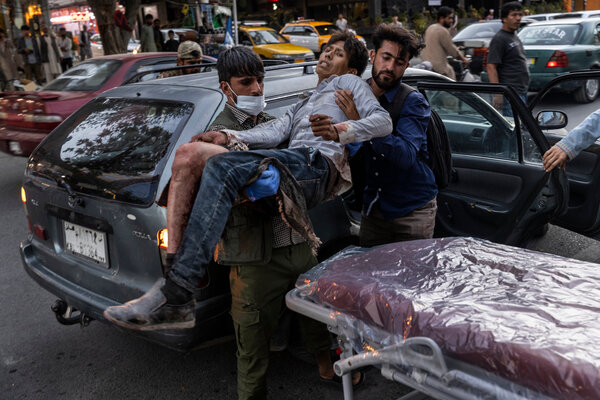 ‘We will not forgive’

Dozens of people, including at least 13 U.S. troops, were killed in attacks by two suicide bombers in the crowds outside Afghanistan’s main airport yesterday, hours after Western governments had warned of an imminent Islamic State attack. Estimates of the toll range from at least 30 to more than 60. Follow live updates here.

The bombs were set off near a crowd of families at the airport gates trying to get onto evacuation flights, as these maps show. See the latest footage from Afghanistan.

Speaking from the White House on Thursday evening, President Biden vowed that the U.S. would retaliate against ISIS-K, the Islamic State affiliate responsible for the attack, and addressed the attackers directly: “Know this: We will not forgive. We will not forget. We will hunt you down and make you pay,” he said. Read the full transcript.

Quotable: More than 250,000 Afghans who worked with the U.S. are expected to be left behind. “I kept thinking, after everything I did for the Americans,” said one interpreter, who was eventually evacuated after a global effort, “after all my hard work and risking my life, now this is what happens to my family? They are leaving us to die here.”

Analysis: Both the Islamic State and the Taliban have proved able to adapt, terrorism experts say, evolving into more diffuse organizations that continually seek out new global trouble spots to put their violent extremism into action.

Europe migrant crisis: A standoff that has trapped Afghan asylum seekers on the border between Belarus and Poland is a telling example of the E.U.’s dilemma over migration, especially acute now with the Taliban takeover.

Mandates against the Delta variant

As the more contagious Delta variant gathers pace in Europe and the U.S., some regional officials have turned to vaccine and mask mandates to manage the spread or ease restrictions.

Oregon, which is facing a 990 percent increase in coronavirus hospitalizations since July 9, will now require that everyone wear masks when gathering closely in public, including outdoors. Illinois will introduce a statewide indoor mask mandate and order educators to be vaccinated or face testing.

In a first in Germany, the city-state of Hamburg will allow restaurants, hairdressers, clubs and religious institutions to bar entry to adults with no immunity to the virus in order to remove strict distancing requirements. The Delta variant accounts for about 97 percent of new cases in Germany.

Vaccine hesitancy: Fear of the variant has been driving an uptick in vaccinations. The least vaccinated states in the U.S. are experiencing the greatest summer increases in first doses.

Flight attendants are dealing with an increase in numbers of unruly passengers, including people who are careless about masks or even physically abusive.

A long-running shortage of truck drivers in Britain has been exacerbated by a post-Brexit exodus of E.U. workers. Adding to the problem are disruptions to training for new drivers because of the pandemic.

The result is a supply chain crisis. Nearly every type of business is complaining about delivery problems, including restaurants, supermarkets and food manufacturers. Organizations are already warning that logistics issues could upend the arrival of Christmas toys and the trimmings crucial to family holiday meals.

After the pound plummeted following the 2016 Brexit referendum, it became less lucrative for continental Europeans — truck drivers included — to work in Britain, prompting some to return to their home countries. Drivers from continental Europe can no longer be employed easily and at short notice in Britain, creating further shortages.

Quotable: “If there are not enough trucks to go around,” said Rod McKenzie, the director of an association that represents the British road transportation industry, “there simply is less stuff being delivered.” He estimates that there is a shortfall of 100,000 drivers.

President Biden and Naftali Bennett, above, the Israeli prime minister, will meet for the first time on Friday. One of the most important items on the agenda is intelligence sharing.

As a law professor, Kais Saied, the president of Tunisia, preached strict adherence to the Constitution. While in government, he has stretched the law to justify seizing power. We looked at what changed.

The German publishing giant Axel Springer agreed to buy Politico in a deal that could shake up the Washington media scene.

“We don’t look to a god for answers. We are each other’s answers.”

Greg Epstein, the next chief chaplain of Harvard University, is a seemingly unusual choice for the role: He is an atheist. Yet many Harvard students attest to the influence that he has had on their spiritual lives.

A new generation of dance

The world of competitive dance is more than the drama and sequins seen on reality shows like “Dance Moms.” Competitions and conventions have molded performers who went on to join elite dance programs and companies, as well as pop stars like Britney Spears and Beyoncé.

Still, the influential events have long been criticized for exclusionary costs, high-pressure environments and the sexualization of children. “I see how much my kids benefit from these events,” Siara Fuller, an artistic director, said. “But some competitions haven’t evolved at all in 15, 20 years.”

A new generation is attempting to reform the dance community, especially regarding issues of gender, predatory behavior and race, Margaret Fuhrer writes in The Times. Some are developing their own conventions to create a safer, more inclusive environment; the Embody Dance Conference, for example, features seminars for dancers on antiracism and mental health and does not divide its students by gender in classes.

Olivia Zimmerman, its founder, hopes other events can adopt such a model. “This isn’t proprietary,” she said. “We’re not trying to make money off ‘being the change.’ I want everyone to follow suit, so that in five years, we’re just another convention.”

This tuna pasta dish gets its brightness from a handful of fresh herbs.

Twenty years after “Y Tu Mamá También” premiered, its director and stars talk about what it meant.

Here are 19 new books to look out for in September, with titles by Colson Whitehead, Sally Rooney, Liane Moriarty and more.

That’s it for today’s briefing. Have a peaceful weekend. — Natasha

P.S. “Late Night with Seth Meyers” shouted out The Times’s Spelling Bee game: “Yesterday I spent 11 hours on it.”

The latest episode of “The Daily” is about Biden’s immigration policy.

Sanam Yar wrote today’s Arts and Ideas. You can reach Natasha and the team at [email protected].