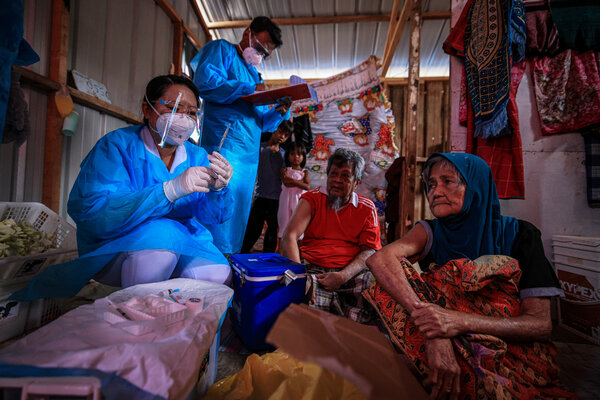 How Asia revved up vaccinations

For months, the Asia-Pacific region struggled to get its Covid vaccination campaigns off the ground. But now, several countries in the region are speeding ahead and some have even pulled ahead of the U.S.

South Korea, Japan and Malaysia have administered more vaccine doses per 100 people than the U.S. has — a pace that seemed unthinkable in the spring. Several countries have surpassed the U.S. in fully vaccinating their populations or are on track to do so, limiting the possible damage from the Delta variant of the coronavirus.

The turnaround is a testament to the region’s success in securing supplies and working out the kinks in their programs.

Across Asia, the incentives offered to get the shot vary, like allowing only vaccinated people to attend social activities, but overall, vaccines have not been a polarizing issue. A research team at the National University of Singapore found that the region holds mostly positive views of Covid vaccines.

Quotable: “It’s almost like the tortoise and the hare,” said the director of the International Vaccine Institute in Seoul. “Asia was always going to use vaccines when they became available.”

Details: In South Korea, the authorities said vaccines had helped keep most people out of the hospital. In Japan, serious cases have fallen by half over the past month, to a little over 1,000 a day. Hospitalizations have plummeted to around 31,000 cases on Tuesday from a high of just over 230,000 in late August.

In other virus developments:

Only nine African countries have met a target of vaccinating 10 percent of their populations by the end of September, the W.H.O. said.

The city of Los Angeles has moved close to enacting one of the strictest rules in the U.S. requiring proof of full vaccination to enter many indoor public spaces.

A make-or-break stretch for Biden

Both the infrastructure and social policy bills are major priorities for Biden, who has staked his presidency on enactment of transformational social policy. But he has faced a series of hurdles, including the threat of a government shutdown as of midnight Thursday that was finally averted when Congress passed a measure to fund the government though December.

Now, all eyes are on the bipartisan infrastructure bill, which was set to come up for a vote late Thursday. Party leaders insisted it was on track.

Roadblocks: Democrats hold a razor-thin majority in both the House and the Senate, but the Democratic Party has deeply been divided over Biden’s agenda.

A key centrist Democrat senator, Joe Manchin of West Virginia, said that he could not support a social safety net bill of more than $1.5 trillion, highlighting differences within the party’s factions. “I think there’s many ways to get to where they want to — just not everything at one time,” he said of those who support the $3.5 trillion package.

Lithuania has enraged China by cozying up to Taiwan, quitting a Chinese-led diplomatic forum and telling its officials to scrap certain Chinese phones that it says carry censorship software.

In response, Beijing has recalled its ambassador, halted trips by a Chinese cargo train into the country and made it nearly impossible for many Lithuanian exporters to sell their goods in China. Chinese state media assailed Lithuania and accused it of being the “anti-China vanguard” in Europe. Its role as a transit corridor for goods heading to Europe makes it important to Beijing.

Lithuania has caused enough of a stink that its fellow members in the European Union are expected to discuss the situation at a meeting next week. Nothing could be worse for Beijing than if other countries followed Lithuania’s example.

The former French president Nicolas Sarkozy was sentenced to a year of house arrest for illegally financing his failed 2012 re-election campaign.

A judge in Los Angeles removed Britney Spears’s father from his position as overseer of her $60 million estate, which he has controlled since 2008.

New Zealand criminalized the plotting of terrorist attacks in response to a knife attack in early September.

The police officer who pleaded guilty to the abduction, rape and murder of Sarah Everard — a 33-year-old London woman whose death set off calls for better protection for women — was sentenced to life in prison.

The police in Germany apprehended a 96-year-old former concentration camp secretary who failed to show up in court. She is facing more than 11,000 counts of accessory to murder.

One of the earliest stories of kite flying dates to the Han dynasty about two millenniums ago, when a general sent a square-shaped assemblage of bamboo and cloth into the air. By the 1700s, flying kites became a popular pastime for children in Europe. Now, a new generation of artists is taking the creation to new heights, from Brooklyn kites that look more like ships to Japanese hand-painted designs.

“The Morozov Collection: Icons of Modern Art,” which opened last week in Paris, brings a “War and Peace”-scale blast of French and Russian painting — and reunites, for the first time since 1918, one of the two most substantial art collections of pre-revolutionary Russia.

When the French bourgeoisie still disdained the Paris avant-garde, the young Russian textile magnates Ivan and Mikhail Morozov bought the most innovative paintings in the city — and bought in bulk. Gauguin, Monet, Van Gogh, Picasso: All their works went east, and they would inspire two generations of Russian successors.

The Morozovs made Moscow into the offshore capital of French modern art in the years around 1900. Then came the October Revolution, when all of the 200 paintings were taken for the national collection. Ivan Morozov went into exile. Under Stalin, the paintings were suppressed and scattered as far as Siberia.

Their reassembly across four floors of the Louis Vuitton Foundation in Paris has been nearly a decade in the making, twice delayed by the pandemic. The backbreaking catalog was curated with cool precision by the former director of Paris’s Picasso Museum.

The exhibition required a colossal diplomatic effort, with assurances that French law would protect the Russian museums against any claims by the Morozovs’ descendants, and a personal sign-off for the loans from President Vladimir Putin.

What to Listen To

Our picks for new audiobooks this week include a comedian’s take on white guilt and a guide to coping with anxiety.

These five stylish, versatile diver watches easily transition from the sea to the street.

For better health and a longer life span, exercise is more important than weight loss, according to an interesting review that looked at fitness, weight, heart health and longevity.

The latest episode of “The Daily” is on a key vote in Congress on President Biden’s infrastructure plan.