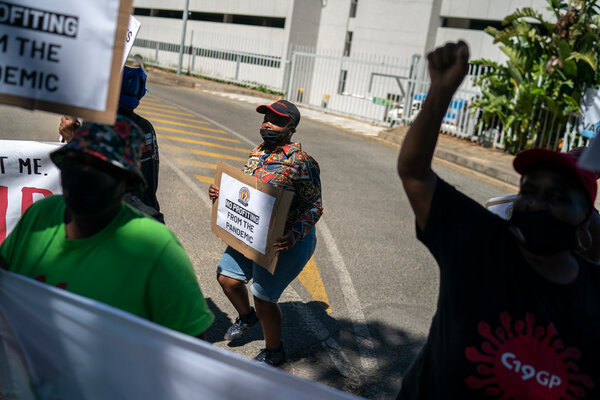 The vaccine inequity that threatens us all

Of the nearly 400 million vaccines delivered so far, about 90 percent have gone to residents of wealthy and middle-income countries, while the rest of the world may have to wait years, potentially prolonging the pandemic.

By partnering with drug companies, Western leaders bought their way to the front of the line, while billions of people wait their turn. But virus variants originating in mostly unvaccinated countries could eventually undo richer countries’ progress, blunting the effect of vaccines.

It didn’t have to be like this. Western governments have resisted the call from global health officials to use rarely employed aggressive powers that could have forced companies to publish vaccine recipes, share their knowledge and ramp up manufacturing, in turn leading to broader vaccine access.

The U.S. government is expected to receive a patent this month on a molecular engineering technique that originated in a National Institutes of Health lab and is at the heart of at least five major Covid-19 vaccines. It could present an opportunity to pressure drug companies to expand access to vaccines to less affluent countries.

Vaccine diplomacy: Russia and China have promised to fill the void, entering into partnerships with producers in places such as Kazakhstan and Indonesia. The global vaccine alliance Covax, which stands to receive $4 billion from the Biden administration, aims to vaccinate 20 percent of people in the world’s poorest countries this year. It faces a $2 billion shortfall.

Here’s a global look at who can get vaccinated right now. And here are the latest updates and maps of the pandemic.

Palestinians and Israelis prepare to go to the polls

In a rare alignment, Israelis and Palestinians are preparing for near-simultaneous elections in the coming months.

At least on the surface, their moods could not be more different: Israel’s fourth election in two years feels to many voters like Groundhog Day, as Prime Minister Benjamin Netanyahu fights to remain in office while standing trial for corruption. Mr. Netanyahu hopes that his handling of the pandemic will give him a victory in Tuesday’s election.

Many Palestinians, meanwhile, are exhilarated by the opportunity to pick their own representation, with the voter registration rate exceeding 93 percent. For the first time in years, they can imagine the dormant Parliament buildings in Ramallah and Gaza City coming back to life — which could, in a best-case scenario for Palestinians, pave the way for a reunification of Gaza and parts of the West Bank under one governing body.

But international rights campaigners warn that the Palestinian elections are no game changer for Palestinian rights. Palestinians in the occupied territories cannot vote in the election that will have the greatest effect on their lives — the Israeli one.

Quotable: “Young Palestinians want change, they want a different life,” said Mkhaimar Abusada, a political science professor at Al Azhar University in Gaza. “The Israelis are sick and tired of going to elections four times in two years — but we haven’t had elections in 15 years.”

Related: The small Palestinian encampment of Humsa has become an embodiment of the battle for the future of the occupied territories.

The coronavirus is again rippling across India. Confirmed infections have risen to about 31,600 daily from a low of about 9,800 in February. In a recent two-week period, deaths from the virus shot up by 82 percent.

Saudi Aramco said on Sunday that its net income last year had fallen by 44 percent, to $49 billion, as lower oil prices stemming from the pandemic cut into earnings.

To keep the virus out, Beijing has enacted some of the world’s toughest border controls. Lives have been upended, and business has been disrupted.

In the aftermath of a diesel scandal, executives at Volkswagen made a commitment to electric vehicles. Five years on, it is paying off.

Above, the return of police officers directing traffic at Piazza Venezia in Rome was greeted by many as a sign of normality at a difficult time.

Violent protests erupted Sunday night in the British city of Bristol over a proposed police and crime bill that would create sweeping new restrictions on protests and grant broad new powers to the police.

Elsa Peretti, the fashion model turned jewelry designer for Tiffany & Company, died at 80 on Thursday night at her home in Spain.

Spectators from overseas will not be allowed to attend the Summer Olympics in Japan.

Hunted nearly to extinction worldwide, the endangered mountain gazelle, above, has found a helping hand on the edge of a war zone, on the Turkish-Syrian border. Its rediscovery and survival has been largely thanks to one man and his love of nature.

Yasar Ergun, a veterinarian and professor at Hatay Mustafa Kemal University in Antakya, Turkey, has used his knowledge of village life to gain the support of local shepherds and educate children to protect the gazelles, even encouraging a local Kurdish legend of a holy man who lived with the gazelles and milked them.

Caity Weaver, a member of The Times’s Styles desk, ventured to Santa Fe, N.M., to try Equus, a horse experience that has a long list of famous clients, including Bette Midler and Jeff Bezos. The program’s website encourages clients to “imagine creating the life you really deserve.” In a recent conversation, she reflected on her experience as she researched a story on whether we can learn anything from horses.

What did you know about Equus before you arrived in Santa Fe?

Not much. They purposely don’t have a lot of photos on their website. The founders told me that they don’t want people coming in with a specific idea of what their experience will be like, because then if it works out differently, clients could be disappointed.

So what elevated it to “I need to try this”?

One thing you always wonder with interesting experiences is: Is anyone actually paying to do this? And often, the answer is no. But the client list was so impressive — Margaret Atwood, Microsoft, a lot of other names I recognized. So I was curious to go and get out of it, presumably, whatever they were getting out of it. I’d love for my life to be as good as Bette Midler’s — I think.

What’s something fun or unexpected you learned?

Candace Croney, a professor of animal behavior and well-being at Purdue University, told me to think of horses the way you think of a cat — they’re not like a dog, who wants to be with you and wants attention. A horse doesn’t really want to be the main thing — maybe it wants to be petted and stroked, maybe it doesn’t. I didn’t learn that before I went, but if I ever meet another horse, I’ll just think of it like a big cat.

This spinach soup with tahini and lemon is bright, complex and a lovely shade of zingy green.

The historical novel “Libertie,” by Kaitlyn Greenidge, focuses on a Reconstruction-era Black woman who comes from an extraordinary family, but longs to be ordinary.

The documentary “Before the Dying of the Light” presents an inspiring view of the roiling visual-arts scene in 1970s Morocco.

A Read From Elsewhere

Writing in The Financial Times, the British food writer Fuchsia Dunlop laments the decline of the “traditional” British Chinese takeaway — and finds an old-school gem in East London.

That’s it for today’s briefing. Have a peaceful, productive Monday. — Natasha

The latest episode of “The Daily” is about the career of New York’s governor, Andrew Cuomo.