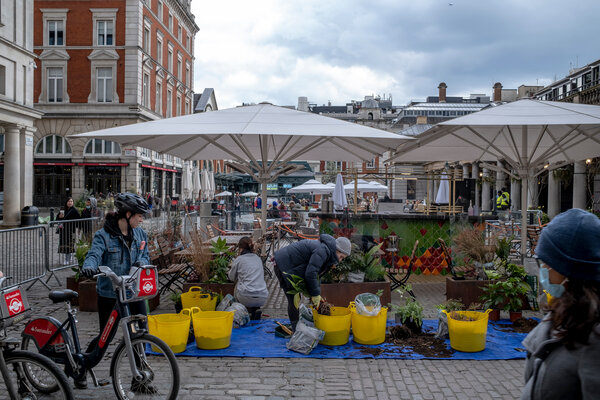 Nowhere has been locked down as long as Europe. As it confronts a deadly new wave of infection, rules are tightening again in many countries. Here’s a snapshot of some of the measures in place.

In Paris, which reported an average of 61 deaths per day over the past week in the surrounding Île de France region, traveling more than roughly six miles from home is forbidden, barring a “compelling reason.” All nonessential businesses are closed. And the authorities have maintained a nighttime curfew that has been in place for months. France recently went into its third national lockdown.

In Milan, which has been hit hard by the virus, all nonessential shops are closed and restaurants are takeout-only. The region of Lombardy reported an average of about 89 deaths and 667 cases per day over the past week, according to a New York Times database. The Italian government has also announced it will place an extra 70,000 officers on surveillance nationwide to enforce the new rules.

For months, London endured one of the world’s strictest lockdowns, even banning sitting on a bench with another person. But cases are now plummeting, with an average of 249 cases and three deaths per day in the Greater London region over the past week.

A broad reopening starts today, with the first pubs serving drinks to punters, some clad in dressing gowns, at 12:01 a.m. this morning. In Britain, 59 vaccine doses have been administered for every 100 people, compared to 22 in Spain and 21 in France and Italy.

The Spanish capital has broadly been an exception to the tight lockdowns. In Madrid, local leaders have chosen to try to keep restrictions at a minimum, even as cases have risen steadily in recent weeks.

With bars, restaurants, museums and theaters open, the city has become a destination in recent months for some Europeans seeking an escape from the rules in their own regions. Madrid reported an average of 18 deaths and 1,654 new cases per day over the past week.

At least 300,000 more people died in Russia last year during the coronavirus pandemic than were reported in the country’s most widely cited official statistics.

Families scattered across the globe are at the mercy of vaccine geopolitics, as every member wonders who will be inoculated last.

India reported a daily record of 145,384 new infections, as vaccinations lag and Covid-19 races out of control. Deaths, while still relatively low, are rising.

Vaccine passports could unlock international travel, but they would stir complex debates about discrimination and global inequality.

American and Israeli intelligence officials said there had been an Israeli role in the explosion. Israeli officials have made no secret of their unhappiness over President Biden’s desire to revive the nuclear agreement that his predecessor renounced in 2018. Israel publicly declined to confirm or deny any responsibility.

Officials, who spoke on the condition of anonymity, said that the explosion dealt a severe blow to Iran’s ability to enrich uranium and that it could take at least nine months to restore Natanz’s production.

After a bloody and contested presidential election three months ago, hundreds of people in Uganda have been forcibly detained in recent weeks. Many said they were hooded, drugged and beaten in prisons, police stations and military barracks. Families are struggling to find relatives who have been disappeared.

The violence comes after President Yoweri Museveni won a sixth five-year term in office, in the most fiercely contested election in years. For many Ugandans, the enforced disappearances suggest a slide toward the repressive policies of former dictators.

Mr. Museveni’s government now appears intent on breaking the back of its opposition — while Bobi Wine, a musician-turned-lawmaker who galvanized youthful crowds of supporters during the election, is largely confined to his house.

Prince Philip, the Duke of Edinburgh and the husband of Queen Elizabeth II, died on Friday at age 99. Read our full obituary here, watch a video tribute and take a look at his life in pictures.

A month after Prince Harry’s explosive interview with Oprah Winfrey, he will attend his grandfather’s funeral on April 17. His wife, Meghan, who is pregnant, will stay in California on her doctor’s orders.

Times reporters took a look at Prince Philip’s life and legacy, including his long marriage to the queen, how “The Crown” changed his image, his royal upbringing and his sense of style.

Myanmar security forces killed more than 80 people at protests this weekend, pushing the death toll above 700 since a military coup in February.

Russia is moving troops, tanks and heavy artillery to its Ukrainian border, its largest deployment in seven years.

More than 20,000 unaccompanied minors are in shelters after crossing the U.S. southern border, and 15,000 more could arrive by June, in a major test for the Biden administration.

In Jordan, the standoff between King Abdullah II and his half brother, Prince Hamzah, bared family tensions and social turmoil.

Saudi Arabia’s Crown Prince Mohammed bin Salman secretly shipped the painting “Salvator Mundi” to the Louvre in 2018. In a report, a team of French scientists pronounced that it appeared to be by da Vinci himself. But a clash of wills has kept the work out of the public eye.

Two years ago, local councilors in the Polish town of Krasnik, population 32,000, adopted a resolution declaring their small town “free of L.G.B.T.” To the mayor, it seemed mostly harmless — a symbolic and legally pointless gesture designed to appease conservative voters.

Today, he’s scrambling to contain the damage, which has led to censure from other European countries and put funding at risk.

A Q&A with the Times crossword editor

Will Shortz has edited roughly 10,000 crossword puzzles since he joined The Times in November 1993. Raised on an Arabian horse farm, he is a holder of the world’s only college degree in puzzles. “Ten thousand Times Crosswords is a milestone. I’m proud of it,” he says. “And even after all of these years, I don’t think I’ll ever get tired of the job.”

This is an edited excerpt from his interview with Deb Amlen, the crossword columnist and senior staff editor of Wordplay.

Tell me how you landed this incredible job.

At 41, I was younger than the other candidates. I think the editor of The New York Times Magazine foresaw the digital revolution, and probably felt that a younger person would have the best chance of navigating that. I also had a good résumé. And he said he liked the sample crossword I submitted.

In 2021, how many puzzles do you see for every one that you accept to run as a daily?

When I started in 1993, I was probably getting 40 to 50 submissions a week. Over the years, the number of submissions has slowly increased.

Now we’re getting close to 200 submissions a week. Since we can publish only seven a week, the acceptance rate is only 3 percent to 4 percent.

Is there anything you’d like to say about inclusiveness and diversity in the constructor rotation?

Last year 30 percent of crosswords were made by women — the highest percentage since I started. The figure is 31 percent so far this year. (Even so, only 20 percent or so of submissions come from women.)

The big change is in age. My sense is that when I started, the average age of the Times contributors was in the early 50s. Now it’s probably in the mid- to late 30s.

The Times is publishing more teen constructors than ever before. I’ve published 46 teens so far, with two more coming up this month.

Keep a stash of homemade samosas in your freezer. For those observing Ramadan, find a collection of recipes here. (This vegan maqluba is especially good.)

DMX, the rapper who died on Friday in New York, had a string of No. 1 albums that electrified audiences and reflected his gritty past. Here are 10 of his essential songs.

Peter Swanson’s “Every Vow You Break” is “deeply entertaining” and a strong argument against marrying in haste, writes our thriller columnist.

Here’s today’s Mini Crossword, and a clue: Where grizzlies might beat the heat (three letters).

On Friday, “The Daily” handed its airtime over to Episode 3 of “Odessa.” And on “Still Processing,” can Disney move beyond its racist past?