Good morning. We’re covering a tense peace between Israel and Hamas, the stunning arrest of a Belarusian journalist and an Indian pandemic success story. 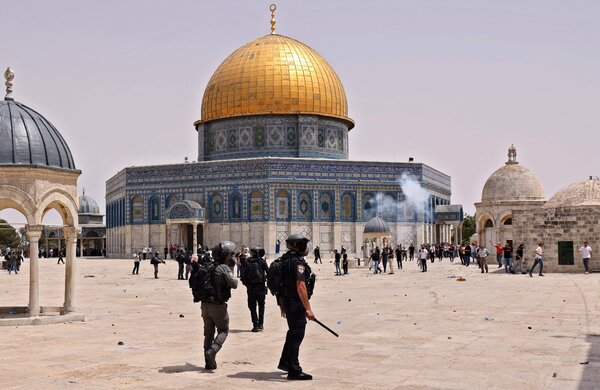 A fraught quiet in Israel and Gaza

The end of fighting between Israel and Hamas does little to address the underlying tensions that precipitated the more than 10 days of violence that ended in a cease-fire on Friday.

Israelis emerged from bomb shelters frustrated at the hasty truce. Many wish the country had continued its bombardment, and officials acknowledge the possibility of more violence, perhaps in the near future.

For Palestinians, the combat inflamed their quest for greater rights and recognition. Many look with rage at Gaza, where Israeli airstrikes destroyed about 1,000 residential units, officials said, and damaged or demolished mosques, hospitals, schools and infrastructure.

Skirmishes continued around the region just hours after the cease-fire went into effect on Friday. In several places around the West Bank, Israeli forces used rubber bullets and live rounds to break up demonstrations. And in an echo of the police raids that brought about the conflict, Israeli soldiers also stormed Jerusalem’s Aqsa Mosque, saying they were responding to Palestinians throwing rocks and firebombs.

The root: In East Jerusalem, housing fights like the one that led to the recent conflict are an unrelenting source of strain as Palestinian families are regularly forced to demolish the only houses they have ever known.

Analysis: President Biden used a light touch with Prime Minister Benjamin Netanyahu, building his credibility — which he may need to leverage with Iran — in order to exert pressure in private. He also said that the Democratic Party had not shifted away from its support for Israel, but walked a fine line, acknowledging commitments to Palestinians. The U.S. intends to help Gaza rebuild and use financial investments to pressure Hamas to maintain peace.

The brutal and erratic leader of Belarus forced a commercial flight to land on Sunday in order to arrest a prominent opposition journalist, prompting international outrage.

A fighter jet intercepted a Ryanair plane flying from Athens to Vilnius, Lithuania. Once grounded in Minsk, Belarusian forces arrested Roman Protasevich, 26, a leading opposition journalist. He has been living in Lithuania in exile, fearing imprisonment on charges of inciting hatred and mass disorder. If convicted, Protasevich faces more than 12 years in prison.

Aleksandr Lukashenko, who is often called “Europe’s last dictator,” personally sent the fighter jet. Belarusian authorities said they had ordered the plane to land because of a bomb threat, although Ryanair said nothing had been found. The top investigative agency in Belarus opened a criminal case into a false bomb threat.

Media: Protasevich and his team report from a Telegram channel. The social network is one of the country’s only remaining means of uncensored communication since most independent media organizations were forced to shut down after large-scale protests erupted over a disputed presidential election in 2020, when Lukashenko clung to power.

International reaction: Greece and Lithuania both called the incident a hijacking by the Belarusian government.

In Kerala, a southern Indian state, local officials have succeeded where the national government has failed in providing relief to coronavirus victims.

The state expanded oxygen production months before the second wave of the virus arrived. Coordination centers use data to direct patients and resources. Workers make sure that patients stick to their home quarantines and are able to get food and medicine. Its official death rate — though government data is lacking — is less than 0.4 percent, one of India’s lowest.

Although deaths are rising in Kerala, the state has consistently better managed the crisis than India as a whole. Throughout the pandemic, it has had more doctors, more testing and five times more hospital beds than the national average. Now, its vaccination rate is nearly double the national average of 3 percent.

Nepal’s Parliament was dissolved on Saturday for the second time in five months, deepening a political crisis as a devastating Covid-19 outbreak rages.

In Pakistan, which has limited vaccine supplies and reams of red tape, the wealthy are buying doses.

In the U.S., the C.D.C. is looking into reports of a heart problem in a very small number of young Covid vaccine recipients, though the agency has not determined whether it is related to the inoculation.

The U.S. may ban all kangaroo products from Australia, threatening the livelihoods of commercial hunters.

Samoa hurtled toward a constitutional crisis on Saturday when the head of state suspended Parliament, just two days before it was scheduled to swear in the first new prime minister in 22 years.

Australia disinterred the so-called Somerton Man, reviving the 72-year-old mystery of a death that has long puzzled investigators and amateur sleuths.

The risk of nuclear war over Taiwan in 1958 was greater than publicly known, according to a new leak of classified documents by Daniel Ellsberg, famed source of the Pentagon Papers.

An erupting volcano that displaced tens of thousands of people in the Democratic Republic of Congo on Saturday night appears to have quieted.

Toward the middle of this century, deaths will start to exceed births for the first time, which will irrevocably alter in the organization of society.

At least 11 people died in Italy when a cable car fell from a height of nearly 40 feet on Sunday.

The Atlantic Ocean on Saturday recorded its first named storm of hurricane season, well before its official start.

As climate change thaws polar sea ice, Russia’s northern border grows more and more exposed. Faced with the strategic implications of climate change, the country is building up its military there in what some have called the beginnings of a Very Cold War.

The Future Is Wiggly

The look — bright, whimsical, even jarring — has its roots in the Ultrafragola, a rippling, pink, neon-lit mirror designed in the 1970s by Ettore Sottsass. The Ultrafragola (which means “ultimate strawberry” in Italian) prefigured the style of the Memphis Group, a playful, zany design collective founded by Sottsass that rejected the formality of midcentury modern Danish design — just as wiggles are ousting the sleek Scandinavian aesthetic that has held sway for years.

The Ultrafragola craze most likely started in fall 2019, when Lena Dunham posed with the object on the cover of Domino Magazine. The pandemic only accelerated the revolution. Lockdowns offered would-be influencers a lot more time to scroll, and stress sent people looking for lightheartedness.

Instead of a garnish, chives are a main ingredient in this creamy pasta with lemon, giving it an onion-y freshness.

These three locally made Australian movies were rare box office hits at home, thanks in part to the pandemic.

What To Listen To

Our pop critics’ playlist has new songs from The Linda Lindas, Blk Jks, Sharon Van Etten and Angel Olsen, City Girls and others.

That’s it for today’s briefing. See you next time. — Amelia

P.S. You can listen to a collection of narrated articles from The Times, read aloud by the reporters who wrote them.

The latest episode of “The Daily” is on the war in Afghanistan.

You can reach Amelia and the team at [email protected].