We’re covering what’s ahead for the Iran nuclear deal and tense elections in Ethiopia. 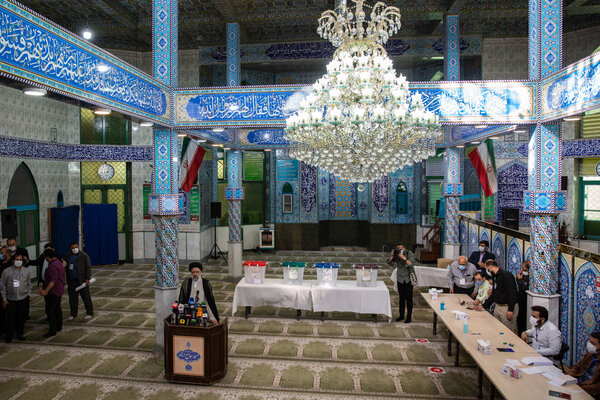 Ebrahim Raisi, Iran’s ultra-conservative former judiciary chief, was elected president after a campaign that was widely viewed as engineered to ensure his victory. His win may give President Biden an opportunity to restore the 2015 nuclear deal.

U.S. negotiators say the next six weeks before Raisi is inaugurated may be a unique window to strike a deal reviving the agreement, which Donald Trump ripped up three years ago. The theory in Washington and Tehran is that Iran’s supreme leader, Ayatollah Ali Khamenei, has been stage-managing not only the election but also the nuclear negotiations — and does not want to give up his best hope of lifting the crushing sanctions that have kept Iranian oil largely off the market.

Analysis: The longevity of Iran’s authoritarian government has defied the assumptions of experts, foreign adversaries, its own citizens and, seemingly, the fundamental laws of history.

Challenges: The U.S. national security adviser, Jake Sullivan, said on Sunday that key challenges remained to the nuclear agreement, including on sanctions and Iran’s nuclear commitments, and that Iran’s final decision on the matter rests with the supreme leader, and not the president.

The Delta variant is proving to be a stubborn hurdle in the fight against the coronavirus.

As the U.S. heads into its second pandemic summer, President Biden warned that the variant is spreading in states with low vaccination rates. The World Health Organization’s chief scientist said on Friday that Delta was becoming the globally dominant variant of the disease, Reuters reports.

Russian virologists say that the Delta variant is now the most prevalent version in Moscow. The mayor, Sergey Sobyanin, told local media on Friday that 89.3 percent of all new coronavirus cases in the city involve the variant. Case numbers have tripled over the past two weeks and city officials have added 5,000 hospital beds.

In England, “freedom day,” when the last remaining coronavirus restrictions had been scheduled to end, was delayed until July 19 after a spike in Delta cases. Prime Minister Boris Johnson expressed confidence that the curbs would be lifted next month but added that “at a certain stage, we are going to have to learn to live with the virus and to manage it as best we can.”

A “black fungus” epidemic is following in Covid’s wake in India, potentially caused by desperate steps that hospitals took to save lives.

The U.S. is shipping 2.5 million doses of the Moderna Covid-19 vaccine to Taiwan, which could raise tensions with China.

Some people in Singapore began receiving the Chinese Sinovac vaccine at private clinics on Friday, even as one of the city-state’s top health officials cast doubt on its effectiveness.

Ethiopians are heading to the polls on Monday in an election long delayed by violence and boycotts, the AP reports, though logistical problems mean that some people won’t vote until September.

Prime Minister Abiy Ahmed has said it will be the country’s first free and fair elections after decades of repressive rule. He won praise for allowing opposition parties to return and for freeing thousands of political prisoners.

But now a war in Tigray has drawn international scrutiny, with rights groups saying the government is rolling back freedoms. Humanitarian agencies recently warned that 350,000 people in Tigray are on the brink of famine. Last week the U.S. State Department said it was “gravely concerned about the environment under which these upcoming elections are to be held.”

In the new Hong Kong, book sellers are walking a fine line. Some flout new rules limiting free speech, as customers look for a sense of connection. Others are coming to terms with the new limits.

The Taliban entered two provincial capitals in northern Afghanistan Sunday, local officials said, the culmination of an insurgent offensive that has overrun dozens of rural districts in recent weeks. The departure of U.S. military forces and contractors has spelled disaster for the Afghan military.

Brazil is facing its worst dry spell in 90 years, and its residents are paying more for electricity, facing the possibility of water rationing and expecting a destructive fire season.

Soviet scientists once denied an anthrax lab leak in the late 1970s that killed dozens of people, and they had the support of American scientists in doing so. More than a decade later, the truth came out. Now, the story of the leak has renewed relevance.

Montreal police said they were investigating after a video of a white officer kneeling on the neck of a Black teenager spurred outrage.

The Australian government said on Saturday that it was lodging a World Trade Organization complaint against the Chinese government over its tariffs on Australian wines, Reuters reports.

The former House of Commons Speaker John Bercow, who gained international fame refereeing Britain’s political drama over Brexit, said on Sunday that he had quit the governing Conservatives to join the opposition Labour Party.

French voters went to the polls on Sunday for the first round of nationwide regional elections, which will test the appeal of the far right.

A 35-day manhunt in Belgium culminated on Sunday in the discovery of a body believed to be that of a missing soldier with links to the far right.

In South Korea, the third-largest market for golf in the world, players in big cities are so desperate to nab a tee time that they have started playing late at night, a phenomenon known as “white night” golf.

After years of waning popularity, Victoria’s Secret, the lingerie giant known for its hypersexy image, is undergoing a major rebrand.

Out are the Angels, the scantily clad supermodels like Heidi Klum and Tyra Banks who posed exclusively for the company. In their place is a group called the VS Collective that is made up of seven women who will advise and promote the brand, including the soccer star Megan Rapinoe and the actor Priyanka Chopra Jonas.

Victoria’s Secret has long “epitomized a certain widely accepted stereotype of femininity,” Sapna Maheshwari and Vanessa Friedman wrote in The Times. But that model is outdated now. Over the past decade, there has been a rise of “the anti-Victoria’s Secrets,” as Rory Satran wrote in The Wall Street Journal. Competitors like ThirdLove and Cuup prioritize “comfort as well as sexiness and structure, inclusive sizing and non-objectifying advertising imagery featuring a diverse group of models.”

Victoria’s Secret has been slow to adapt. “We needed to stop being about what men want and to be about what women want,” Martin Waters, the chief executive of the brand, said. In stores, mannequins will now come in a wide range of shapes and sizes. The company will also start offering products like nursing bras and sportswear.

One question remains: Will women buy it?

This fluke au gratin, an elegant and really quite simple preparation, can be made with any mild-flavored fish.

What to Listen To

These five action movies should satisfy fans looking for new thrills to watch at home.

Here’s today’s Mini Crossword, and a clue: What can function as a camera, calendar, clock, calculator, etc. (five letters).

You can find all of our puzzles here.

P.S. Denise Grady is retiring after spending two decades covering medicine for The Times. She shared some thoughts about the job in this farewell article.

There’s no new episode of “The Daily.” Instead, on Episode 4 of “Day X,” an interview with the first soldier to be tried for terrorism in Germany since World War II.

Remy Tumin and Sanam Yar contributed to the briefing.