Americans prepare for a challenging Thanksgiving.

We’re covering a Thanksgiving holiday overshadowed by the coronavirus, President Emmanuel Macron’s move to the right and a five-mile post-Brexit traffic jam. 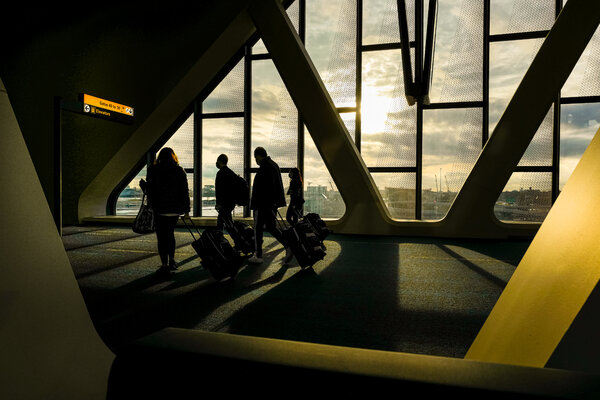 Under normal circumstances, families across the U.S. would be gathering, some in groups of a dozen or more, on a holiday that celebrates coming together. But this year, as the country experiences its most deadly surge yet of the coronavirus, only about 27 percent of Americans plan to dine with people outside their household, according to a survey requested by The Times.

A virus surge that started in the Midwest now appears to be morphing into swift resurgences in cities like Baltimore, Los Angeles, Miami and Phoenix, adding first-time spikes in smaller cities away from the nation’s middle, like Cumberland, Md. Simply put, the coronavirus is everywhere.

More than 1.2 million cases in the U.S. have been identified in the past week, and the country is on pace to reach 13 million known cases within days. The seven-day average of daily deaths is over 1,600. Scientists are expressing deep foreboding about the arrival of Thanksgiving and cold weather during such a surge.

On the front lines: Doctors and nurses are running on empty. “This is my job, what I wanted to do for a living,” said a critical-care physician in Houston who brought the virus home with him, sickening his whole family. “And it could have killed my children, could have killed my wife — all this, because of me.”

The U.N.’s top refugee official said on Wednesday that the rise in coronavirus infections had worsened an already extant toxic side effect of the pandemic: the abuse of refugee women and girls.

A state-owned vaccine maker in China has filed an application to market the vaccine in the country before it has completed trials.

President-elect Joe Biden urged Americans to forgo Thanksgiving gatherings to avoid spreading the virus and described his own family’s plans to stay distant. “We all have a role to play in beating this crisis,” Mr. Biden said.

AstraZeneca’s vaccine trial suffered from multiple data and dosage errors. The problems may mean that the company’s vaccine will not be one of those made available early.

Macron’s decisive swing to the right

A rightward push by the French government is alarming civil-liberties advocates in France and raising questions about President Emmanuel Macron’s positioning ahead of an expected electoral challenge from the far right in 2022.

Propelled by a national wave of anxiety following recent terrorist attacks by Islamist extremists, two proposed laws underscore what critics have called an alarming drift toward repression in government policy. One would restrict the public filming of the police, while the other seeks further restrictions against Islamism as the French government has defined it, reaching into some aspects of Muslim life.

That bill would ban home-schooling, flag in a database those deemed to “excuse” terrorist acts, subject organizations that receive government subsidies to a test of allegiance to “the values of the republic” and increase strictures against polygamy, which is already illegal.

Words of opposition: “This law does nothing to reinforce secularism,” said Aurélien Taché, a representative in Parliament who quit Mr. Macron’s party. “Those who pretend to want to do that, actually what they actually want is to exclude the Muslims.”

The death of a soccer legend

Diego Maradona, the Argentine who became a national hero as one of soccer’s greatest players, died at 60 on Wednesday in Tigre, Argentina. His spokesman said the cause was a heart attack after years of health problems.

Argentina declared three days of national mourning for the player who took up the sport in dusty streets “with an urchin’s resourcefulness,” our reporter writes. He turned professional by 15, starring with Napoli and Barcelona and then in 2010 coaching Argentina in the World Cup.

Maradona scored one of the game’s most controversial goals and one of its most celebrated in the span of four minutes in 1986 against England — punching the ball into the net with his fist for the first and then deftly maneuvering 70 yards through five British players for the second.

The women who loved Diana

In her lifetime, Diana, the Princess of Wales, was adored by many women in Africa and the diaspora, who then passed that loyalty on to their daughters. For these mothers and daughters, watching “The Crown” feels personal, writes our reporter.

“It’s just known that African mothers love Diana,” said Wangechi Waweru, a Kenyan rapper, whose mother was one such fan. “She was their Beyoncé.”

Michael Flynn: President Trump pardoned the former national security adviser, who had twice pleaded guilty to lying to the F.B.I.

Post-Brexit chaos: A dress rehearsal by French border police officers testing immigration procedures before the deadline for a post-Brexit trade deal between Britain and the European Union resulted in a five-mile traffic jam in Kent, in southern England, up to the entrance of the Eurotunnel, which connects the country to France.

Loujain al-Hathloul: Visibly weak and afraid, the activist, who campaigned for women’s right to drive, appeared before a Saudi judge on Wednesday to learn that her case was being transferred to a special court for terrorism and national security crimes, her family said.

Iran prisoner release: The country released a British-Australian scholar, Kylie Moore-Gilbert, detained since 2018 on spying charges, in a prisoner swap on Wednesday for three Iranian men who had been held abroad, Iran’s official news media reported.

Duchess of Sussex: In our Opinion section, Meghan wrote about having a miscarriage in July and suggested a question to ask loved ones in this year of loss: “Are you OK?”

Snapshot: Above, a pro-democracy rally in front of the Siam Commercial Bank headquarters in Bangkok on Wednesday. Thailand’s lèse-majesté law, which makes insulting the king punishable by years in prison, is being used against the protesters’ leadership for the first time.

Wish you were here: Take an armchair voyage to the museums of Paris (and their gift stores), Madrid’s vintage enclave, Copenhagen’s artisanal ceramists or the French island where that amazing flaky salt comes from. You might perfect the art of Swedish mys and even pick up a souvenir or two.

What we’re reading: This Esquire interview with BTS ponders masculinity, the future and world domination. “For those of us who missed the rise of the world’s biggest band, it also provides ample background,” says Will Dudding, an assistant on the Standards team.

Cook: This turkey tikka masala gets its deep flavors and moisture from marinating the turkey overnight in yogurt, turmeric, garam masala and garlic paste.

Listen: Beyoncé, Taylor Swift and Dua Lipa dominate the nominations for this year’s Grammy Awards. Here’s the full list of nominees, including those for song of the year.

Do: Give someone the gift of healthy living this year with one of these ideas from the writers and editors of Well.

For ideas on other wonderful ways to pass the time, scroll through our At Home collection on what to read, cook, watch and do while staying safe at home.

The time we spend on screens has skyrocketed during the pandemic. Experts say too much screen time can take a toll on our mental health, depriving us of sleep and eating away at our attention. Here are some tips for detoxing from our devices.

Come up with a plan. Not all screen time is bad, so assess which parts are toxic and impose time limits to minimize them. Set modest goals, such as a 20-minute limit for reading the news on weekends. For structure, create calendar events for everything, including browsing the web and taking breaks.

Create no-phone zones. Leaving your phone outside your bedroom keeps at bay blue light, which can trick your brain into thinking it’s daytime, and removes the urge to check it in the middle of the night. Another no-phone zone could be the dinner table, a prime opportunity for families to put devices away for at least 30 minutes and reconnect.

Resist the hooks. Beware the artificial goals and infinite feeds that tech companies use to keep us glued to our screens. Turn off notifications for all apps except those that are essential for work and keeping in touch with people you care about. If you feel strongly addicted, take an extreme measure and turn the phone to grayscale mode.

That’s it for this briefing. Wishing you a peaceful, productive day.

Thank you
Theodore Kim and Jahaan Singh provided the break from the news. You can reach Natasha and the team at [email protected]

P.S.
• We’re listening to “The Daily.” Our latest episode follows New York City residents facing food shortages during the pandemic.
• Here’s our Mini Crossword, and a clue: Color of a blue sky (five letters). You can find all our puzzles here.
• Whether you're preparing for the end of Britain’s lockdown or celebrating Thanksgiving abroad, this weekend might be a good time to tie up loose ends.
• Kim Fararo, an editor on our Foreign desk, will take on a new role as deputy editor in Europe.