We’re covering a spike in deaths in Canada from the heat wave and China’s Communist Party turning 100. 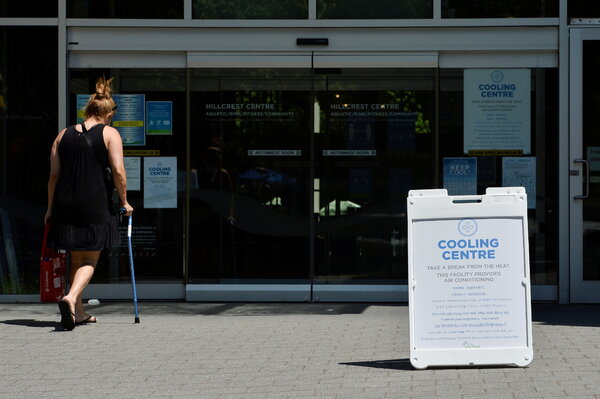 More than a hundred deaths in British Columbia have been linked to a heat wave that has roasted parts of western Canada, broken heat records three days in a row and sent thousands scrambling for relief.

In the U.S., where parts of Washington State and Oregon have been battered by extreme heat several days in a row, President Biden met with state leaders and pledged aid to try to minimize weather-related disasters. California is bracing for another summer of destructive fires, and punishing drought conditions are gripping the American West.

Excessive-heat warnings were in place. People were showing up at emergency rooms for heat strokes, heat exhaustion and dehydration. Heat advisories were also in effect from Philadelphia to Boston in the Northeast.

Deaths: British Columbia’s chief coroner said 233 deaths had been reported over four days, while typically about 130 deaths would have been reported in the same time frame. Deaths were expected to increase, she said.

Quotable: “The big lesson coming out of the past number of days is that the climate crisis is not a fiction,” John Horgan, the premier of British Columbia, said. “It is absolutely real.”

A warming planet: The seven warmest years in the history of accurate temperature record-keeping have been the last seven years, and 19 of the 20 warmest years have occurred since 2000.

Putin pushes Russians to get vaccines

As Russia struggles to contain a harrowing new wave of coronavirus infections, President Vladimir Putin struck a changed tone and urged Russians to get vaccinated.

“It’s dangerous, dangerous to your life,” Putin said of the virus during his annual televised call-in show on Wednesday. He spent the first half-hour trying to convince people to get one of Russia’s four domestically produced shots.

Russia’s biggest cities, Moscow and St. Petersburg, have been reporting more than 100 deaths per day recently, setting records. There has been a dramatic turnaround in the way top officials address the pandemic: For months, they did not do much to push the vaccine-wary public to get immunized. But for some groups, they are now making the vaccine mandatory. (Putin said he does not support that, passing the buck to regional officials.)

Numbers: Only 23 million Russians, or about 15 percent of the population, have received at least one vaccine dose. Independent polls this year showed that some 60 percent of Russians did not want to be vaccinated.

Why the hesitation? Analysts say that the widespread distrust of the authorities could have contributed, as well as the steady drumbeat of state TV reports that either downplayed the virus or claimed Russia had defeated it.

North Korea’s leader, Kim Jong-un, said the country’s virus response created a “great crisis,” according to state media. It’s unclear if he was talking about an outbreak.

A tense anniversary in Hong Kong

In addition to the flashy centennial celebrations of the Chinese Communist Party, this week brings a couple of anniversaries for Hong Kong and China.

July 1 is the day of Hong Kong’s handover to China from Britain in 1997. And just over one year ago, late on the evening of June 30, 2020, Beijing imposed a sweeping national security law that has affected just about every aspect of life in Hong Kong.

The day has long been met with public protest in Hong Kong, but an application to demonstrate on Thursday was rejected by the police. The city was wrapped in an extensive security bubble to prevent any unrest. Thousands of police officers were set to be deployed to clamp down on any unauthorized gatherings and prevent people from assembling in Victoria Park, where the annual July 1 march traditionally begins. Here are the latest updates.

Didi, the leading Chinese ride-hailing platform, made its Wall Street debut, capping a year in which ride-hailing and travel companies have struggled to overcome intermittent pandemic lockdowns.

After the coup in Myanmar, President Biden is being pushed to do what the Trump administration would not: declare atrocities against the Rohingya in 2017 as genocide.

At least four whales, 20 dolphins and 176 turtles died and washed ashore in Sri Lanka a month after a ship caught fire and sank, spilling chemicals.

The World Health Organization declared China free of malaria after a seven-decade campaign against the disease, which has killed hundreds of thousands of people in the country.

An international tribunal in The Hague convicted two former Serbian officials of aiding and abetting war crimes committed in the 1990s wars that ravaged the Balkans. It was the final case to be heard by the tribunal, set up three decades ago.

Donald Rumsfeld, the U.S. secretary of defense for two presidents, died at 88. He was in charge of the invasion of Iraq under George Bush.

Britney Spears’s father, James Spears, called for an inquiry into claims that she was being abused under the conservatorship.

Serena Williams dropped out of Wimbledon because of a leg injury. She is one title short of the record for most majors won.

Bill Cosby had his conviction for sexual assault overturned by an appeals court, a decision that will allow him to be released from prison.

The Tokyo Olympics offer an opportunity to anoint a new crop of champions to inspire Japanese girls with athletic aspirations. But outside of the Games, female athletes face immense hurdles and are limited by the rigid gender norms of Japanese society.

China will celebrate the 100th anniversary of the founding of its Communist Party on Thursday. Beijing has put up decorations and is portraying this symbolic political moment as a triumph.

The event caps a year in which Beijing has come under criticism for its refusal to allow W.H.O. investigators much access to delve into the origins of the coronavirus, its crackdowns on Hong Kong and Xinjiang, and its hostility toward Taiwan.

The party’s longevity has baffled its critics, and as The Economist reports, no other dictatorship has transformed so much — from a famine crisis in the Mao Zedong era to the world’s second-largest economy. Economic growth and a sharp decline in rural poverty in many places have won the hearts of many citizens more than ideology.

But there are many challenges ahead to maintain the economic benefits that have kept young Chinese people optimistic about the future.

Falling birthrates are plaguing the nation, and officials have made it a priority to get families growing. This year, the party moved from a two-child policy (which replaced the infamous one-child policy in 2016) to a three-child policy, but young people are not biting. Income inequality, a lack of child care options and vast economic divides present a long-term problem for the party in this area.

For this week’s event, officials are rewriting parts of history and clamping down on criticism in order to glorify the party’s contributions to Chinese citizens. (There is even a special hotline to report “historical nihilists.”) But party members wonder if Xi Jinping is doing enough to move the country forward, The Financial Times reports. Many insiders criticize Xi as having done away with the checks and balances put in place under Deng Xiaoping that helped the party avoid embarrassing mistakes and left the economy to flourish. — Melina

Gazpacho is perfect when it is too hot to eat but you need cold, salt and lunch at the same time.

Turn your phone into a virtual fitness coach.

Mia Bloom and Sophie Moskalenko’s “Pastels and Pedophiles” looks at how the QAnon conspiracy theory morphed into a political movement.

P.S. The Times won an award from the Society of Publishers in Asia for its visual investigation on how China is using forced Uyghur labor to produce face masks.

The latest episode of “The Daily” is about an unclassified report on U.F.O.s.