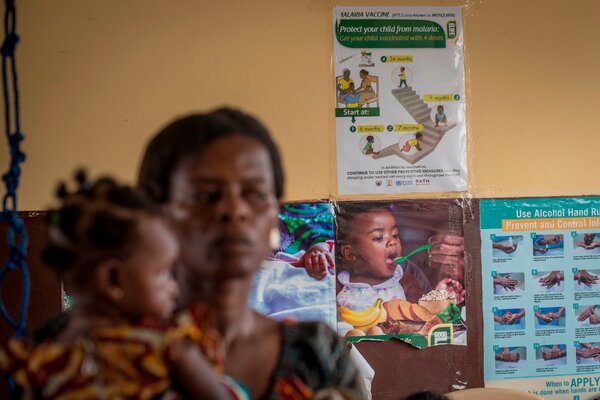 A milestone in the fight against malaria

The W.H.O. approved the first malaria vaccine, which could save the lives of tens of thousands of children in sub-Saharan Africa. Made by GlaxoSmithKline, the vaccine encourages a child’s immune system to thwart the deadliest and most prevalent of the five malaria pathogens.

Dr. Pedro Alonso, director of the W.H.O.’s global malaria program, described the new vaccine as a historic event as the first developed for any parasitic disease. “It’s a huge jump from the science perspective to have a first-generation vaccine against a human parasite,” he said. The quest for a malaria vaccine has been underway for a hundred years.

Though the vaccine has a moderate efficacy of about 50 percent against severe malaria in the first year, dropping to zero by the fourth year, a modeling study has estimated that it could prevent 5.4 million cases and 23,000 deaths in children younger than 5 each year.

The global Covax program, which supplies Covid vaccines to most of the world, is falling behind on its target to deliver enough doses to Latin American and Caribbean countries to inoculate 20 percent of their people this year.

The failure is partly attributable to the fact that wealthy countries that can pay more for the shots are buying up supply, said Dr. Jarbas Barbosa, a W.H.O. official. “Producers are not prioritizing delivery to the Covax mechanism,” he said. “They continue to prioritize the bilateral agreements they have because in these bilateral agreements the vaccines are more expensive.”

Wealthy countries have raced far ahead of the rest of the world in vaccination rates, and they continue to buy doses as demand for booster shots rises. Only nine of Africa’s 54 countries had met the goal of vaccinating 10 percent of their people by the end of September, the W.H.O. said.

By the numbers: Around 37 percent of the population in Latin America and the Caribbean has been fully vaccinated, but access in the region has been uneven, with very high rates of vaccination in Cuba, Chile and Uruguay.

The U.S. will spend $1 billion to quadruple the availability of at-home rapid coronavirus tests by the end of the year, the White House announced yesterday.

Nearly 11 of every 100,000 males ages 16 to 29 developed temporary heart inflammation after having been fully vaccinated, according to a new study. Though higher than earlier estimates, it is lower than the risk of heart problems after contracting Covid-19.

In a speech that offered few concrete details, Boris Johnson, the British prime minister, vowed to engineer a radical transformation of the country’s economy for a future defined by highly skilled workers earning higher wages.

Barely mentioning Britain’s current fuel and food shortages, Johnson sketched a vision of Britain on the cusp of change. “We are not going back to the same old broken model,” he said. “Low wages, low growth, low skills and low productivity — all of it enabled, as a system, by uncontrolled immigration.”

Johnson devoted much of the speech to his flagship policy of “leveling up,” which aims to even out disparities between the economically disadvantaged northern parts of England and the more prosperous South. The Conservative Party has led the government since 2010, yet the prime minister spoke of the last decade as though some other party had been in charge.

Slogans: Johnson has branded his agenda “Build Back Better,” the same slogan President Biden uses for his infrastructure legislation. He riffed on the line, adapting it to describe the return of beavers to British rivers (“Build Back Beaver”) and beef exports to the U.S. (“Build Back Burger”).

Analysis: Commentators observed that Johnson appears to to be aiming at a party that combines the free-spending, interventionist impulses of social democrats with the anti-immigration instincts of the Brexiteers who agitated to leave the E.U. in 2016.

News From the U.S.

The U.S. appears on track to avert its first-ever default on federal debt, after Mitch McConnell, the Senate minority leader, offered to allow a debt-limit increase until December. He has refused to lift his blockade of a long-term increase in the government’s borrowing limit.

Top Democrats say the Republican refusal to allow a vote to avert a default is the most powerful argument yet for weakening the filibuster, which has become the Senate’s signature procedural weapon.

President Biden will meet virtually with President Xi Jinping of China this year in their first summit since Biden took office.

A federal judge granted the Justice Department’s request to temporarily halt enforcement of the recently passed Texas law that bans nearly all abortions in the state.

The sheikh of Dubai used Israeli software to hack the phones of his former wife, Princess Haya bint Al-Hussein, above left, and her lawyers, a British court said. The pair are embroiled in a legal battle over the custody of their two children.

Congressional testimony from the Facebook whistle-blower has intensified calls in Europe for new laws aimed at the social media company. Some of the proposals are considered by many to be among the most stringent in the world.

Twitch, the live-video site that is popular with gamers, endured a “potentially disastrous” data breach that security researchers believe may have provided sweeping insight into the platform’s computer code.

The Netflix series “Squid Game” has proved a hit around the world, including in its setting, South Korea, where it taps into worries about costly housing and scarce jobs.

The Nobel Prize in Chemistry was awarded to two scientists for work that spurred research into new drugs and reduced the effects of certain products on the environment.

A Vatican court acquitted two priests on charges related to allegations of sexual abuse of a former altar boy.

As a humanitarian crisis grows on Poland’s border, where the government has taken a hard line on migrants, one asylum seeker faced an impossible decision over whether to save his ailing baby daughter and risk being expelled after a perilous journey to Europe. Above, a family of Kurdish asylum seekers at the Polish border with Belarus.

There is strong evidence that Aleksandr Lukashenko, the strongman Belarusian president, is using migrants as a weapon to punish the E.U. for imposing sanctions on him.

A big mission for James Bond

After 18 months of on-and-off closures, Britain’s movie theaters looked to “No Time to Die,” the 25th installment of the Bond franchise, to help usher people back through the doors.

Expectations were high: Daniel Craig’s two previous Bond films, “Skyfall” and “Spectre,” are the second and third highest-grossing films ever at the British box office, and the franchise is a beloved, if sometimes bemoaned, fixture in British cultural life, Eshe Nelson reports from London.

Fortunately, Bond has given a meaningful jolt to industry returns — in one weekend, it made £26 million, or $35 million, at the box office, surpassing the opening weekends of the two previous Bond films. Some theaters scheduled dozens of screenings a day, while others made a spectacle of the release, organizing live music or opening-night parties with cocktails and canapés.

But how much can one film do for an industry in flux? With pressure from streaming services and the financial toll of the pandemic still in play, Britain’s cinemas still face many hurdles — including the virus itself.

Read more about the future of nights at the movies.

Take five minutes to fall in love with Maria Callas.

The heart-pounding new documentary “The Rescue” tracks the 2018 effort to save 12 young soccer players and their coach who were trapped in a flooded cave in Thailand.

That’s it for today’s briefing. Thanks for joining me. — Natasha

P.S. Blake Hounshell, who held a series of important roles at Politico, is joining The Times to help build a new team for our On Politics newsletter.

The latest episode of “The Daily” is about the Senate testimony of a Facebook whistle-blower.