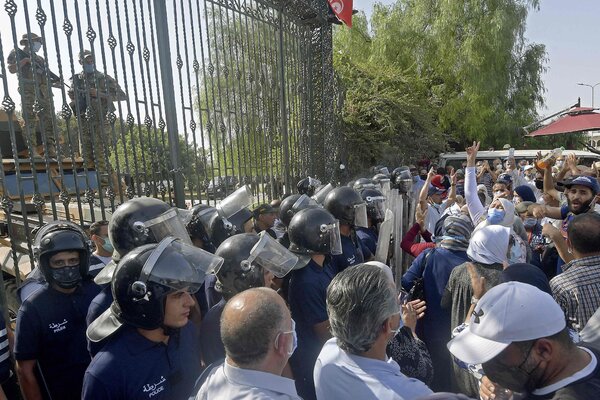 Kais Saied, the president of Tunisia, has tried to seize power from the rest of the government in what his political opponents denounced as a coup. He announced on Sunday that he was firing the prime minister, suspending Parliament and taking control amid large anti-government protests over deepening health and economic crises.

With Syria, Yemen and Libya undone by civil war, Egypt’s attempt at democracy crushed by a counterrevolution and protests in the Gulf States quickly extinguished, Tunisia was the only country to emerge from the Arab Spring revolutions with a democracy, if a fragile one.

Saied did not appear to have completely succeeded in taking control as of yesterday evening, as chaos enveloped the North African country. But many Tunisians expressed support and even jubilation, frustrated with an economy that never seemed to improve and soaring death rates from the coronavirus.

U.S. response: “Tunisia must not squander its democratic gains,” the State Department said in a statement. Secretary of State Antony Blinken, in a phone call on Monday with Saied, encouraged him “to adhere to the principles of democracy and human rights,” a spokesman said.

The Biden administration will continue to restrict entry of Europeans and others into the U.S., citing concerns that travelers infected with the coronavirus may further spread the Delta variant across the country.

“The more transmissible Delta variant is spreading both here and around the world,” Jen Psaki, the White House press secretary, said yesterday afternoon, adding that cases were rising in the U.S., particularly among the unvaccinated. She did not give a timeline for when the restrictions might be lifted.

The decision is a setback for the travel industry, which hoped that a lifting of the bans would increase tourism for the remaining summer months, helping hotels, airlines and other struggling businesses.

France has made health passes mandatory in more indoor places such as bars, restaurants, gyms and certain malls as the country faces a fourth wave of infections. The law passed on Sunday after days of heated parliamentary debates and protests in dozens of French cities.

The U.S. Department of Veterans Affairs is the first federal agency to require health workers to be vaccinated against the coronavirus. New York City’s municipal workers, including police officers and teachers, and California state employees will soon also have to be vaccinated or face weekly testing.

Workers in Mexican factories that produce goods for the U.S. are getting American vaccines.

Pfizer-BioNTech and Moderna will expand their vaccine studies for children ages 5 to 11.

The latest from the Olympics

On the fourth day of the Tokyo Olympics, teenagers dominated the women’s skateboarding street competition, with four of the eight women in the final age 16 or younger. The gold and silver medalists are both 13.

Katie Ledecky, the five-time Olympic gold medalist, swam in her first final in Tokyo, the 400-meter freestyle, but lost to Ariarne Titmus of Australia. Lydia Jacoby of the U.S. upset her teammate Lilly King in the 100-meter breaststroke. British swimmers dominated the men’s 200-meter freestyle.

In the women’s road race, Anna Kiesenhofer of Austria took the gold, upsetting 38-year-old Annemiek van Vleuten of the Netherlands, who threw her hands up in victory when she crossed the finish line on Sunday, only to realize moments later that she was not, in fact, the winner.

Though officially barred from the Olympics, Russia is very much a presence at the Games. The country edged out Japan, the 2016 champions, for the men’s gymnastics team gold yesterday, unseating the host nation by just 0.103 points.

Here’s the medal count and the latest updates.

Weather challenges ahead: The Summer Olympics have already been hampered by sweltering heat. Starting on Tuesday, athletes will also have to contend with strong winds and heavy rain, with a typhoon expected to make landfall north of Tokyo. The weather has also led to a schedule change for surfing.

The death toll from monsoons on the western coast of India rose to at least 164. About 100 others were reported missing after heavy rains deluged entire towns and villages.

About 1,000 people on the Italian island of Sardinia have been evacuated after huge wildfires burned at least 50,000 acres.

Heavy flooding wreaked havoc across London, after a month’s worth of rain fell in some places over the weekend.

The final death toll in the Surfside, Fla., condo collapse is 98 after the authorities identified the remains of the last victim, Estelle Hedaya, above.

Civilian casualties and rights violations are soaring in Afghanistan, rights groups say, with the Taliban carrying out the bulk of the offenses amid the void left by departing American forces.

Talks between U.S. and Chinese diplomats in Tianjin, China, ended with little sign that the nations were closer to narrowing their disagreements.

More than 13 years after a strict legal arrangement gave James Spears, Britney Spears’s father, control of his daughter’s affairs, a new lawyer for the singer asked a Los Angeles court to remove her father from the arrangement.

Is Jeff Bezos an astronaut? Probably not. Is Richard Branson? Maybe.

A generation gap has emerged between younger workers and more established colleagues who value the physical workplace over the advantages of remote work. Bridging it may require flexibility.

Our OnTech newsletter talked to an expert about the changing debate on children’s use of tech.

The belief that screen time is rotting children’s brains is getting a do-over, as parents, physicians and researchers gravitate to a more nuanced message: Screen time or technology can be good — and bad — for children.

Dr. Colleen Russo Johnson, a child development expert and mother, said that it was long overdue to move away from absolute and unrealistic limits on children’s screen time.

“We have to stop looking at this as a black-and-white issue,” Dr. Russo Johnson said. “You don’t want your kids always glued to screens. That is common sense,” she added. “But these things are not evil. There is a lot of variety, and everything is not created equal.”

Dr. Russo Johnson said that parents and caregivers might try seeking out technology that actually encourages younger children to be creative and do activities away from the screen, such as going on a scavenger hunt from onscreen prompts.

Pastry-phobes have nothing to fear with this easy apricot and pistachio tart.

Escape to an idyllic dude ranch in Wyoming.

That’s it for today’s briefing. See you next time. — Natasha

The latest episode of “The Daily” explains rare breakthrough coronavirus infections among the vaccinated.

Melina Delkic contributed to today’s Arts and Ideas. You can reach Natasha and the team at [email protected].