We’re covering the start of Trump’s impeachment trial, vaccinations for older Indonesians and the risks of virus spread from unmasked crowds celebrating the Super Bowl. 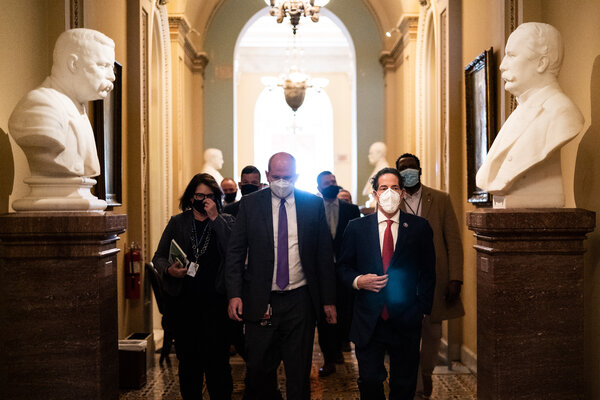 Lawyers for former President Donald Trump on Monday denounced the impeachment charges against him as “political theater,” arguing that he did not incite rioters to attack the Capitol and that it was unconstitutional for the Senate to try a former president. Here’s the latest on the proceedings, which begin on Tuesday.

House impeachment managers have said that Mr. Trump was “singularly responsible” for the attack after a campaign to spread false claims that victory in the presidential election had been stolen from him. Here’s where every senator stands on convicting the former president.

Mr. Trump is the first ex-president ever to be subject to an impeachment trial after leaving office. The proceedings will open with a debate on whether a former president can be tried by the Senate for high crimes and misdemeanors. If a simple majority of senators agree to move forward, as expected, the prosecution and defense would begin presenting their cases on Wednesday. Mr. Trump’s lawyers have said that he will not testify at the trial. Here’s a guide.

The trial is expected to break Friday evening and reconvene on Sunday to honor the Jewish Sabbath at the request of Mr. Trump’s lawyers. It could conclude as early as next week, faster than any presidential impeachment trial in American history.

The first vaccinations of people over 60 began on Monday, a reversal after officials initially excluded the age group, citing a lack of safety data.

The drug regulator reversed course last week, granting emergency authorization of the Chinese-made Sinovac vaccine for use among older people after analyzing new clinical trial results from China and Brazil that showed it was safe.

The government had been criticized for initially excluding people over 60 — the age group has accounted for half of the number of deaths from the virus in Indonesia. Recipients in that age group will receive their second shots four weeks after the first, instead of two.

The numbers: Indonesia, the world’s fourth most-populous nation, with 270 million people, has recorded more than 1.1 million infections and more than 31,000 deaths, making it the worst outbreak in Southeast Asia.

China on Monday reported zero locally transmitted coronavirus cases for the first time since mid-December. In recent weeks, the government has been battling new outbreaks in northern provinces with lockdowns on millions of people.

Representative Ron Wright, Republican of Texas, who died on Sunday, is the first seated U.S. member of Congress to die after battling the coronavirus. He was 67.

Facebook said it would remove posts with false claims about vaccines. “Building trust and confidence in these vaccines is critical,” the company said in a blog post.

Tesla, the electric-car maker owned by Elon Musk, disclosed in its annual report on Monday that it had purchased $1.5 billion worth of the cryptocurrency. Bitcoin reached a record after Tesla’s announcement, rising more than 10 percent to above $44,000 per coin during early trading on Monday.

The company said the purchase was part of a plan to invest in alternative assets. Mr. Musk has previously encouraged stock frenzies and gotten into trouble for his Twitter pronouncements.

A quirky currency that was intended to be a joke, DogeCoin, has also been swept up in the mania. The digital currency, named for a meme featuring a startled dog, was up 30 percent on Monday — double the gain in Bitcoin.

Related: Chinese regulators met with executives from Tesla recently after government agencies reported complaints from consumers about battery fires and quality issues with the company’s cars.

If you have 7 minutes, this is worth it

The pandemic has sped up departures from Israel's ultra-Orthodox community, which makes up 12 percent of the country’s population. With their religious routines disrupted by lockdowns and school closings, and with more time at home for self-discovery, people are making the decision to leave.

“When I had a lot of time to think, the questions flooded up again,” said one 21-year-old who quit and took up a secular lifestyle.

China dissident: Geng Xiaonan, an entrepreneur who was a success story in the cooking and lifestyle industries, is set to stand trial today after being charged with illegal business activities. Her supporters say her real offense in the eyes of the government was sympathizing with critics of the Communist Party.

China journalist: Chinese authorities have placed Cheng Li, an Australian journalist who worked as an anchor for a business show on China’s state television, under arrest on suspicion of sharing national secrets, a move that’s likely to increase tensions. She was detained in August.

SoftBank: The Japanese tech giant reported a profit of more than $11 billion for the three months that ended in December. The earnings report capped a turbulent 12 months for the company that manages the world’s largest tech investment fund.

Australian Open: Serena Williams will once again go for her 24th Grand Slam title at the tennis tournament that began in Melbourne on Monday, after a three-week delay because of the pandemic. Here’s what to watch.

Snapshot: Above, crowds in Tampa, Fla., after the Super Bowl. This year’s event was very different: The crowd was limited to roughly one-third of the stadium’s capacity and fans were encouraged to watch alone at home. But many still congregated, raising fears that the event would help spread the coronavirus.

What we’re listening to: This episode of “The Cut” podcast, about the challenges of sobriety or limiting alcohol during the pandemic. It’s a helpful look at some of the mental and emotional challenges of a pandemic that’s gone on for so long.

Cook: With only a few steps and five main ingredients, this tofu with mixed grains barely requires a recipe, but the results are nourishing and deeply satisfying.

Read: Electrons, photons, gluons, quarks: A Nobel-winning physicist explains it all in “Fundamentals.”

Do: Managing your relationship with your bosses can be as important as tackling your task list. Try these 11 steps to impress your boss and thrive in your job.

We have many more ideas to share on what to read, cook, watch, and do while staying safe at home in our At Home collection.

The impeachment trial of former President Donald Trump that begins today is only the fourth in U.S. history. Nicholas Fandos, a congressional correspondent for The Times who covered Mr. Trump’s first impeachment, discussed what seems familiar and what feels different about this second trial.

Where will you be for the impeachment?

This time around, I will probably be watching most of the proceedings from home in Washington because, like other news organizations, we’ve tried to limit our physical presence in the Capitol. Luckily, most of these proceedings are captured on C-SPAN or are livestreamed. Vaccinations are starting to get pretty common among lawmakers, but most reporters still don’t have them.

How did covering the last impeachment prepare you to cover this one?

It’s so wild. There have been three presidential impeachment trials in American history up to this point. So there’s a certain amount of specialized expertise you have to develop to understand the rules of impeachment and the different terms, not to mention the requirement that you have some mastery over a big, complicated political, legal and constitutional story. So, in some ways this time around, I’m lucky because I don’t need to learn the rules again.

The core charge against Donald Trump is in many ways the same. Essentially, he was accused of taking extraordinary, abusive steps to stay in office and to maintain his power at the expense of the Constitution and the country. I also think many of the political questions are the same. Are Republicans willing to punish and cross this figure, who may have committed these acts, but who is also the most popular figure in their party and commands a huge amount of loyalty?

Thank you
Carole Landry helped write this briefing. Theodore Kim and Jahaan Singh provided the break from the news. You can reach the team at [email protected]

P.S.
• We’re listening to “The Daily.” Our latest episode is about the future of the Republican Party.
• Here’s our Mini Crossword, and a clue: Not to be trusted (five letters). You can find all our puzzles here.
• Stuart Andrew Thompson talked to CBS about Opinion’s cellphone tracking investigation into the Jan. 6 riot at the Capitol.