We’re covering a pivot in Russia’s coronavirus strategy, the latest in the Thailand protests and why Americans of various backgrounds are buying more guns. 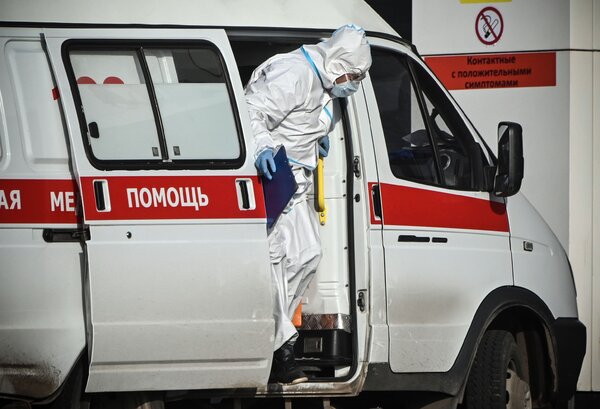 Russians are ordered to wear masks

The Russian government on Tuesday made its boldest move yet to try to stem a second wave of coronavirus infections, mandating masks in public places throughout the country.

The federal health watchdog agency also urged governors to order restaurants and entertainment venues to close by 11 p.m. It was an unusual step; President Vladimir V. Putin had resisted taking any nationwide measures.

The numbers: Russia recorded 16,550 new cases on Tuesday, the fifth day in a row with more than 16,000 new cases. The government also reported 320 coronavirus deaths, a single-day record. And the lower house of parliament released a staggering metric for its assembly’s representatives: 20 percent have or have had the virus, and 38 members are currently hospitalized with it.

Hong Kong will loosen restrictions on beaches, bars and restaurants after a drop in coronavirus infection rates.

Protests broke out in several Italian cities after a government decree aimed at stemming the spread of the virus went into effect. Hundreds of demonstrators in Catania, Milan, Turin and other cities blocked traffic, set off firecrackers, burned garbage cans and clashed with the police.

For Trump and Bolsonaro, a shared Covid-19 playbook

After returning to Brazil, 22 members of Mr. Bolsonaro’s delegation tested positive for the virus, yet he was not alarmed. Mr. Trump had shared a cure, Mr. Bolsonaro told advisers: a box of the anti-malaria drug hydroxychloroquine, the unproven treatment that Mr. Trump was promoting as a remedy for Covid-19.

The dinner cemented a partnership rooted in a shared disregard for the virus.

Prime Minister Prayuth Chan-ocha on Tuesday dismissed calls from opposition parties to resign at a parliament session he had called to discuss months of protests demanding his departure and reforms to the monarchy.

“I will not run away from problems. I will not leave my duty by resigning at a time when the country has problems,” Mr. Prayuth, a former army ruler, told the assembly, whose entire upper house was picked by his old junta.

The protesters had given Mr. Prayuth a deadline to resign from his post, delivering him a resignation letter to sign last week. Though he revoked an emergency decree, he does not appear to be budging on larger issues.

Context: Tens of thousands of people have protested for months, demanding changes to the constitution and checks to the monarchy’s power. It began as a student-led revolt against the military’s influence on the classroom, and ballooned into a movement with a sweeping range of issues and supporters.

If you have 7 minutes, this is worth it

In the United States, spikes in gun purchases are often driven by fear. Many gun buyers now are saying they are motivated by a new destabilizing sense that is pushing people who had considered themselves anti-gun to buy weapons — and people who already have them to buy more.

The nation is on track in 2020 to stockpile at record rates. Our reporters looked at why Americans, battered by the pandemic and headed for elections, were buying weapons.

Hong Kong activist: The police arrested a 19-year-old activist outside the U.S. consulate just as he was about to seek asylum, according to an advocacy group. The activist, Tony Chung, had been arrested in July under the new national security law.

Pakistan: At least seven people were killed and more than 70 wounded when a powerful explosion ripped through an Islamic religious school in the suburbs of Peshawar. No group has claimed immediate responsibility.

U.S. election: President Trump and his rival, Joe Biden, are spending the final days of the campaign traveling to battleground states. Follow our election updates here.

Snapshot: Above, a protest in Bangladesh on Tuesday sparked by French President Emmanuel Macron’s remarks on Islam. Muslims have held demonstrations and called for boycotting French goods following police raids in France, after the killing of a high school teacher who showed caricatures of the Prophet Muhammad in class.

What we’re reading: This excerpt in The New Yorker on U.S. health care reform from President Barack Obama’s upcoming memoir. “There’s a lot of fascinating detail about American politics, but also some touching passages on fatherhood, the family dog and sailing,” writes Carole Landry of the Briefings Team.

Listen: These news podcasts for children are perfect for young people seeking a better understanding of what the adults are fussing about and for parents who want to help their children learn how to engage with the world.

Do: Herbal teas can soothe and restore. Here’s a step-by-step guide to growing brew-friendly plants at home.

We have plenty of ideas and we’re happy to share them in our At Home collection on what to read, cook, watch, and do while staying safe at home.

Most businesses in China, whether the fanciest hotel or a roadside fruit stand, accept digital payment through apps, in particular Alipay and WeChat. Our On Tech newsletter writer spoke with Ray Zhong about the payment apps and whether China offers a glimpse at a cashless future for the rest of us.

How did Alipay and WeChat get so popular in China?

Ray: Credit cards were never prevalent in China. The country skipped over a generation of finance and went straight to smartphone-based digital payments. And the apps are simple for businesses. If a business can print a QR code, it can get paid by app. They don’t need special machines as businesses do to accept credit cards or many mobile payments like Apple Pay.

What’s useful about these payment apps?

I know paying with a credit card isn’t tremendously difficult, but making it a fraction easier to buy stuff has enabled different kinds of commerce. You probably wouldn’t buy something on Instagram for 50 cents with your credit card, but people in China do buy digital books one chapter at a time.

How did China’s government respond to these two apps creating a financial system outside its explicit control?

The government has been attentive. It put a cap on fees that Alipay and WeChat can charge merchants. And where the apps make their real money — in making loans and selling investments — the government wants to make sure borrowers aren’t being gouged and investment funds aren’t taking on excessive risks.

Alipay and WeChat deliberately now say they are partners to banks, not competitors.

Thank you
To Theodore Kim and Jahaan Singh for the break from the news. You can reach the team at [email protected]

P.S.
• We’re listening to “The Daily.” Our latest episode is about what we learned from the last contested U.S. election.
• Here’s our Mini Crossword, and a clue: Word in four U.S. state names (three letters). You can find all our puzzles here.
• Carolyn Ryan, a leader of The Times’s Diversity, Equity and Inclusion initiative, has been promoted to deputy managing editor.