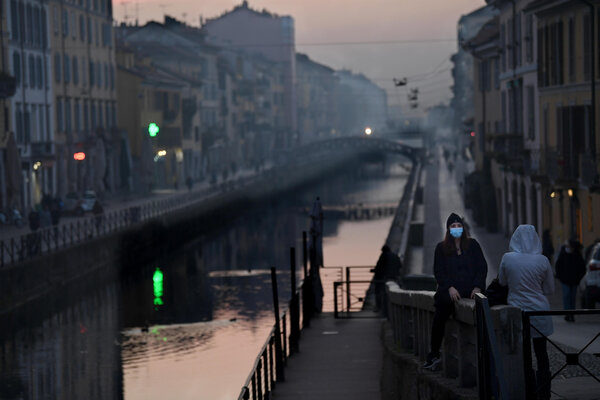 As a second wave of the coronavirus pandemic strains the Italian health care system, the government will seal off and lock down hard-hit portions of the country today, limiting movement to and between areas in at least five regions.

As of Monday, the average number of daily new cases over seven days was 32,684, according to a New York Times database, a 92 percent increase from 14 days prior. Hospitals have had to make room for beds in chapels and conference rooms as coronavirus patients overwhelm wards.

“Nearly all the Italian regions are highly affected,” said Giovanni Rezza, the director of the prevention department at the Health Ministry, adding that new restrictions were necessary in a situation that “keeps worsening.”

Unrest: Protests by regional presidents in the locked-down areas have unnerved the government. “Do we get it or not that we are at war?” said Pierpaolo Sileri, Italy’s deputy health minister. “We are fighting to save Italy.”

Saeb Erekat, a senior Palestinian negotiator who passionately advocated the establishment of an independent Palestinian state, has died after contracting Covid-19. He was 65.

U.S. federal health officials provided projections for when and how Americans might be able to begin to receive a Covid-19 vaccine, once one has been authorized.

Lockdown — something experienced, dreaded and needed by much of the world for at least some of 2020 — is the Collins English Dictionary’s word of the year.

A husband-and-wife team helms the European biotech start-up working with Pfizer on its leading vaccine. (On their wedding day, they returned to the lab after the ceremony.)

What Trump’s defeat means for populism

President-elect Joe Biden’s victory in the U.S. presidential election last week is a stinging blow to right-wing populists, from Britain and Brazil to Poland and Hungary. But its consequences for populism as a global political movement are more ambiguous.

Whether the fortunes of comparable politicians in Europe will be tied to President Trump’s remains to be seen, analysts say. The economic, social and political grievances behind such movements are still alive and indeed may be reinforced by the ravages of the coronavirus pandemic, while social media continues to spread populist ideas, often cloaked in conspiracy theories.

In a signal of a broader return to normal in international relations, Mr. Biden fielded congratulatory calls from European leaders such as President Emmanuel Macron of France and Chancellor Angela Merkel of Germany on Tuesday. President Vladimir Putin of Russia is among the few authoritarian allies of Mr. Trump to maintain silence about the election, along with President Jair Bolsonaro of Brazil and President Xi Jinping of China.

Across the border: After four years of surprise tariffs, stinging insults and threats from Mr. Trump, many Canadians have expressed giddy jubilation and sense of deep relief over Mr. Biden’s victory.

The transfer of power: Asked about Mr. Trump’s continuing refusal to concede the election, Mr. Biden said: “How can I say this tactfully? It will not help the president’s legacy.” A Trump appointee must formally recognize Mr. Biden as the president-elect for the transfer to begin. The Times has found no evidence of voter fraud.

The Upshot: How did pollsters get it so wrong — again? For now, there is no easy excuse.

A highly anticipated report found on Tuesday that Pope John Paul II had rejected explicit warnings about sexual misconduct by Theodore McCarrick as he elevated the cardinal to the highest ranks of the church hierarchy.

Mr. McCarrick was Washington’s archbishop and one of the most powerful leaders of the Roman Catholic Church in the United States, with deep connections in the Vatican. But he became the highest-ranking American official to be removed for sexual abuse when Pope Francis kicked him out of the priesthood in 2019. The 449-page report had the potential to engulf three separate papacies in scandal.

Five key takeaways: Who knew what, who’s (perhaps) to blame, what you need to know.

If you have 5 minutes, this is worth it

The Netflix hit “The Queen’s Gambit” has inspired a new debate about inequality and sexism in chess and what, if anything, can be done about it. Among the more than 1,700 grandmasters worldwide, only 37 are women. Currently, only one woman, Hou Yifan of China, ranks in the Top 100.

The reality, top players and teachers say, is even worse. “There were opponents who refused to shake hands,” said Judit Polgar, the only woman to ever be ranked in the Top 10 of the game.

Nagorno-Karabakh: Russian peacekeeping forces were deployed to the ethnic Armenian enclave on Tuesday after Armenia and Azerbaijan signed a Russian-brokered deal to end a six-week war that had already killed thousands.

Soccer: Greg Clarke, the chairman of England’s soccer association, has resigned from his position after a disastrous testimony to a parliamentary committee in which he spoke in offensive stereotypes about Black and Asian people, girls and others.

Affordable Care Act: At a Supreme Court hearing, at least five justices signaled support for the health care law and suggested that striking down the so-called individual mandate, the requirement to obtain insurance, would not doom the balance of the law.

Snapshot: Emily Harrington, above, is the first woman to free-climb the Golden Gate route up El Capitan, a 3,000-foot-high monolith in Yosemite National Park, in under 24 hours. Her mantra: “Slow is smooth, smooth is fast.”

Fowl play: A hacker slipped more than 1,500 fake votes into New Zealand’s Bird of the Year 2020 contest, in favor of the kiwi pukupuku, ruffling the feathers of the country’s online community.

Lives Lived: Marty, “the highest cat in New England,” was the green-eyed, feather-tailed, much-loved mascot of Mount Washington Observatory, some 6,288 feet above sea level in North Conway, N.H. He died at 14, or possibly 15, last week.

What we’re reading: This Caity Weaver homage to her home state. Our colleague Daniel Victor, a reporter in London, calls it “the Pennsylvania tribute that Pennsylvania deserves.”

Cook: These brussels sprouts with pickled shallots and labneh call for date syrup, available at Middle Eastern grocery stores or online, or pekmez, a type of fruit molasses used in Turkish cooking.

Read: These four story collections reconsider history and upend tradition, including “Where the Wild Ladies Are” by Aoko Matsuda, which updates a traditional Japanese folk tale for our contemporary world.

Do: Decades-old movies, songs and video games are surging in popularity, along with old favorites like Spice Girls and Fleetwood Mac. Nostalgia can be a healthy coping mechanism during the pandemic.

Made plans for tonight? Check out our At Home collection of ideas to help you decide what to read, cook, watch, and do while staying safe at home.

Denmark’s mink cull is on hold because of a question about the government’s legal authority to order it. But why did it seek to do so in the first place? James Gorman, a science writer at large for The Times, explains what you need to know, excerpted here.

Can mink infect people with the coronavirus?

Yes. In Denmark, mink have contracted the virus and spread it to people. The same happened in the Netherlands this year. They are the only animal known to do so.

Does the virus mutate in mink?

Yes. In more than 200 people, Danish authorities have documented several variants of the virus that contain mutations originating in mink. The virus also mutates in people. But there is no evidence that any of the mutations that originated in mink make the coronavirus more transmissible in humans or make humans sicker.

Why did Denmark decide to kill all of its farmed mink?

Danish health authorities were concerned that one set of mutations could make a potential coronavirus vaccine less effective, after the possibility was raised in preliminary tests. The World Health Organization and independent experts said there was no evidence so far that it would diminish the value of vaccines currently in development.

Scientists say that there are reasons beyond this particular mutated virus for Denmark to act.

Thanks for joining me. See you next time.

Thank you
To Theodore Kim and Jahaan Singh for the break from the news. You can reach the team at [email protected]

P.S.
• We’re listening to “The Daily.” Our latest episode is about what went wrong with presidential polling.
• Here’s our Mini Crossword, and a clue: Sound from a baby bird (five letters). You can find all our puzzles here.
• The word “hyperpoop” first appeared in The Times on Tuesday, according to the Twitter account @NYT_first_said.
• Andrew Higgins, our Moscow bureau chief, will be moving to Warsaw to head up our Eastern Europe bureau. Anton Troianovski will be our next Moscow bureau chief.