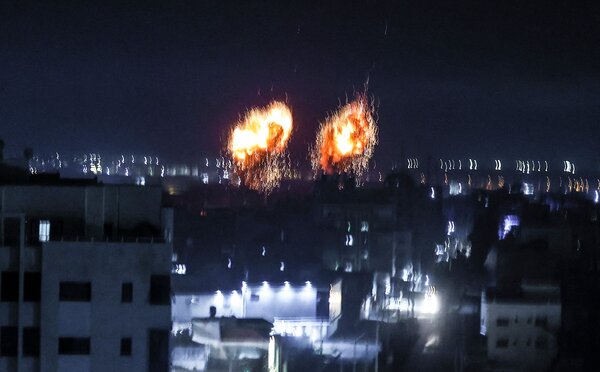 The Israeli military conducted airstrikes in the Gaza Strip early on Wednesday, in response to incendiary balloons sent into southern Israel from Gaza by the militant group Hamas. There were no immediate reports of casualties.

The day of rising tensions started after the Israeli government permitted a far-right Jewish march to pass through Palestinian areas of Jerusalem on Tuesday night, over the objections of Arab and leftist parties in the coalition, and despite threats from Hamas that it would retaliate.

Gaza has barely begun to recover from last month’s fighting, which killed at least 250 Palestinians and 13 people in Israel and damaged more than 16,000 homes, according to the U.N. Over 11 days, Gaza militants fired more than 4,000 rockets into Israel.

Details: The incendiary balloons tend to be less destructive than rockets, though they sometimes scorch large stretches of farmland and land near homes. Israel’s new prime minister, Naftali Bennett, had previously said that those launching the balloons were “terrorists” who should be killed.

Biden to meet with Putin in Geneva

President Biden will meet with President Vladimir Putin of Russia in Geneva today. The summit comes days after Biden notably referred to Putin as a “a worthy adversary,” in what some analysts have interpreted as a critical show of respect.

Russian officials see a renewed opportunity for improving the U.S.-Russia relationship in Biden’s emphasis on predictability and stability. Though there is little expectation that the meeting will radically reframe relations, there is hope in Russia among both supporters and critics of Putin that it will at least stop their downward spiral.

“Putin’s goal is to transition to a respectful adversarial relationship from the disrespectful one we have today,” said Vladimir Frolov, a Russian foreign affairs columnist. “That seems to be in line with Biden’s objectives for a ‘predictable and stable relationship.’”

Quotable: “This is a different man,” Putin said of Biden. “I very much expect — there are pluses and minuses — that there will not be such impulsive movements on the part of the current president, that we will be able to observe certain rules of interaction and will be able to agree on things and find some points of contact.”

Related: Russia has been a space power for decades. But now the future of the country’s program rests with China, a budding partnership that reflects today’s geopolitics.

Asia lags behind in the fight to end the pandemic

Across the Asia-Pacific region, the countries that led the world in containing the coronavirus are now languishing in the race to put it behind them.

While the U.S. and some other Western nations are cramming airplanes with vaccinated passengers, the countries praised for their early handling of the pandemic are stuck in cycles of restrictions and isolation, with their borders often resolutely shut.

The tolerance for constrained lives is thinning, and one main factor is contributing to the uncertainty: a lack of vaccines, with campaigns barely underway in many countries. “It’s like we’re waiting in the glue or mud,” said a vaccine expert in Melbourne, Australia.

Details: The whipsawing is rooted in decisions made months ago. In the spring of 2020, the U.S. and European nations bet big on vaccines, fast-tracking approval and spending billions, while places like Australia, Japan and Taiwan, with case numbers low, felt less urgency to buy.

An analysis of health insurance records of almost two million coronavirus patients found new health issues in nearly a quarter of them. Those affected were all ages and many were asymptomatic when they had Covid. Others find certain foods off-putting because of distortions of smell and taste.

Officials in California and New York lifted virtually all coronavirus restrictions on businesses and social gatherings.

Britain announced a free-trade agreement with Australia on Tuesday, the country’s first major deal since it formally left the E.U. last year.

The U.S. and the E.U. agreed to suspend a bitter, 17-year dispute over subsidies for Airbus and Boeing, while working together to counter China’s investment in the aircraft sector.

Hungary’s Parliament adopted legislation that would increase sentences for sex crimes against children. Critics say the law is being used to target the country’s L.G.B.T. community ahead of elections next year.

The southwestern U.S. is entering a severe heat wave that could aggravate wildfires and overwhelm power grids.

Before leaving office, Donald Trump pressured the Justice Department to take up his false claims of election fraud.

Colorado wildlife officials found a litter of gray wolf pups — the state’s first since the 1940s, when they were hunted nearly to extinction.

MacKenzie Scott, one of the richest women in the world, announced that she would be making grants totaling $2.7 billion to 286 organizations. Charitable giving in the U.S. rose 5 percent in 2020 to a record $471.4 billion.

The veteran CNN anchor Christiane Amanpour told viewers that she had been diagnosed with ovarian cancer but that she had “had successful major surgery to remove it.”

Even before the pandemic, Amazon lost about 3 percent of its hourly associates each week, with turnover of roughly 150 percent a year. But over the past year, as orders skyrocketed, the company burned through workers, as it relied on a strained, faltering system that hired, monitored and fired without much human contact.

An examination by The Times into how the pandemic unfolded at Amazon’s JFK8 center in New York found that the crisis exposed the power and peril of Amazon’s employment system. Here are five takeaways from the investigation.

At the end of last year, a decades-long conflict between Armenia and Azerbaijan erupted in six weeks of intense fighting in Nagorno-Karabakh, eventually brought to a pause by a Russia-brokered peace agreement. As Turkey’s president, Recep Tayyip Erdogan, visits Nagorno-Karabakh this week, Melina Delkic, who writes our Asia briefing, caught up with our correspondent Andrew Kramer, who covered the conflict.

When we left off watching the region closely, there was a fragile peace. Most Armenian-controlled territory in Nagorno-Karabakh was returned to Azerbaijan. Where does it stand now?

The settlement has mostly held. There have been some limited skirmishes on the border. Several people have died in shootouts along the de facto line of control established by the settlement around what remains of Nagorno-Karabakh.

What is the significance of Erdogan’s visit?

The settlement promised a land link all the way into Azerbaijan and theoretically over the Caspian Sea by boat to Central Asia. All these Turkic-speaking countries would be connected by this transport from Turkey more directly. The idea of a pan-Turkic sphere of influence came about in the immediate post-Soviet period. Turkey’s influence and clear role in helping the Azeri victory sets them up for maybe a revival of this idea of a pan-Turkic area.

Are there any other long-term geopolitical outcomes?

When the Soviet Union broke up, it created 15 new countries. There were also enclaves that became de facto independent states that were not recognized by the outside world, including Nagorno-Karabakh. It was the only so-called frozen conflict zone that was not controlled by Russia. What this settlement did is bring Russia in.

Charged with making a wedding speech this summer? We spoke to several experts for tips to help you speak from the heart and cut the clichés.

Here’s today’s Mini Crossword, and a clue: “What a joke!” (five letters).

P.S. The Times Magazine’s Art and Photo departments won 16 awards from the Art Directors Club, including Design Team of the Year.

The latest episode of “The Daily” is about why U.S. billionaires pay so little tax.