Even the wealthy can’t always get what they want.

Take Tom and Karian Forsyth, who live in Southern California. In May 2020, in the depths of the pandemic, they weren’t surprised to receive a call canceling the 100-foot yacht they had chartered to sail along the Croatian coast. But then, three weeks after chartering an 88-foot yacht in Newport, R.I., for this summer, they got a call canceling that contract.

Many parts of the economy are dealing with a sudden increase in demand, and the boat market is one of them. The uptick in sales and charters of boats began early in the pandemic, as the wealthy looked for a safe place to be out with their families. As a result, anyone looking to buy a small runabout may need time to find one. Someone seeking to charter a megayacht will also need to be patient. And in both cases, prices are up.

Yatco, an international database of all yachts for sale and for charter, ran the numbers for me and found that sale prices and charter rates had increased significantly from their prepandemic levels in 2019.

“We’ve seen a seismic shift,” said Steven Myers, the founder and chief executive of Yatco. “Across the industry there’s been a surge in sales and charters.”

There is also less room for price negotiations, Yatco data shows. In 2019, boats smaller than 50 feet sold for about $25,000 less than their asking price. Last year, that discount was $16,000, and this year it is just under $14,000. Even for boats bigger than 150 feet, which require a special pilot’s license, sales have been strong, with the average price this year running more than $20 million, Mr. Myers said.

“It’s a sellers’ market, for sure,” he said, comparing it to the real estate market in Palm Beach, Fla., where he is based. “We just had a superyacht purchased sight unseen, which is unheard-of when you’re spending millions of dollars.”

The market for charters is stronger than it has been in years, with boat and yacht owners having the upper hand. Before the pandemic, someone who wanted to charter a yacht could bargain over price or the duration of the charter. That is less the case now.

“Owners are no longer negotiating on pricing or delivery fees and are less likely to accept shorter-term charters of three or five days in favor of a full week or more,” said Katy Carter, charter broker at Fraser Yachts in Fort Lauderdale, Fla. “We are seeing a lack of availability, and it’s not due to owners using their vessels. It’s lots of interest in charters.”

Given the demand, many owners are not discounting their fees for longer-term yacht charters. “I absolutely have seen a lack of discount deals being made,” said Sean Zamora, charter manager at Moran Yacht & Ship. “Even if the charter is for two to three weeks, the owner will want the full rate.”

And when something needs to be fixed on a yacht — which happens fairly regularly — it is taking more time to get the parts and to service the vessel, keeping it out of circulation longer.

The Forsyths were able to find another yacht after their charter in Newport was canceled. But the new one was larger and more expensive.

Brock Pierce, chairman of the Bitcoin Foundation, just bought a 105-foot Mangusta, an Italian yacht that costs around $6 million new. His is from 1998 and cost a little over $1 million. He said he had been chartering yachts in the Mediterranean Sea and Caribbean for over a decade but couldn’t find a yacht he wanted to charter this year.

“It’s the first time I’ve owned a boat, because I was told you don’t own these things, you charter them,” Mr. Pierce said. “I had multiple problems with chartering. There was a general lack of availability but also a lack of choice.”

Mr. Pierce, who divides his time between Puerto Rico and Florida, said he justified the purchase because he lives next to the water. But in his first few months of ownership, he has been paying what he called “a never-ending stream of expenses you don’t expect.”

One alternative between outright ownership and chartering is the country club model. Barton & Gray and Freedom Boat Club are two of the big clubs. Their members have access to a wide range of boats but have to reserve them and may not always be able to use the boat they want when they want it — on Father’s Day, for instance, or the Fourth of July, when lots of members want to be on the water.

The goal of the Freedom Boat Club, which is owned by the large boat maker Brunswick, is to get people out in smaller vessels that they can captain themselves. The club charges an initiation fee of $5,000 to $7,000 and then monthly dues of $350 to $450, depending on the market. Its 40,000 members have access to about 3,200 boats, all under 24 feet long.

Freedom Boat Club has added nearly 10,000 members since the pandemic began, said Brenna Preisser, president of the business acceleration division at Brunswick. “Boating is one of those great social-distancing activities,” she said, adding that the club has one boat for every eight to 10 members.

Barton & Gray operates more like a full-service country club, charging a $20,000 initiation fee and annual dues. Those dues vary from $39,000 to use the smallest boats, at 36 feet, to $114,500 to use any boat in the fleet and to be first in line for reservations a season in advance. (In the summer, the boats are up North, but they go to Florida and the Carolinas for the winter.) Most members pay $54,000, which gives them access to all the boats but limits them to booking four charters at a time.

“We have members who go out 100 times a year, and others who go out a couple times a season,” said Douglas Gray, co-founder of Barton & Gray. “We have a full concierge team and organize all the activities on the water and the catering.” Members pay for the fuel and whatever they eat and drink. 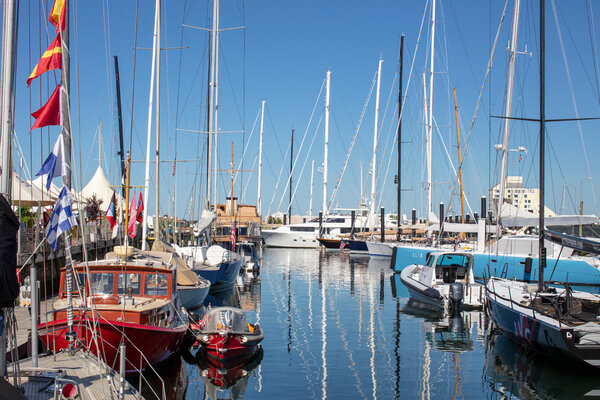 Richard C. True, a real estate developer who splits his time between Boston and Palm Beach, has been a lifelong boater. When his first wife died in 2011, he sold his 40-foot vessel; he joined Barton & Gray when he missed being out on the water.

He tried owning a boat again in 2015 but sold it after one season. Remarried, he had a son who was then 3. “It was just the whole setup process and the breakdown process,” Mr. True said. “I’d spend an hour cleaning it afterwards, and my wife was like, ‘We’ve got to go.’”

He’s back with Barton & Gray and said he now got to boat in five or six different areas, year round.

Some people have used the memberships to help with their work. Lauren Stephens, a co-founder of Dudley Stephens, a women’s clothing line, said she had built her company’s brand through social media but was running out of new locations to use in marketing her brand. She and her co-founder and sister, Katherine McGrath, are using their boat membership for photo shoots on beaches along the East Coast.

“We’ve done location photo shoots where hotels charge $15,000 to $20,000 for one day,” Ms. Stephens said. “From a cost perspective, we don’t have to pay the one-time fee that’s so painful. Plus, it’s special and unique. It feels like a luxury hotel, but you’re on the water.”

“This summer,” Ms. Stephens said, “just so happened to be the summer to do it.”