The president will need to make rapid, strategic choices to advance his “Build Back Better” agenda, possibly including dropping some campaign plans to salvage the rest. 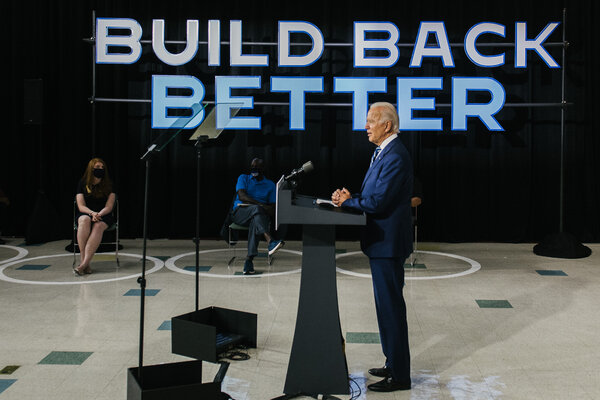 WASHINGTON — After a two-month, $2 trillion sprint to pass aid for an economy still hobbled by the coronavirus pandemic, President Biden is finally set to detail his “Build Back Better” agenda next week in Pittsburgh. Its name, carried over from the 2020 campaign, has become a catchall phrase that cabinet officials and junior aides use to describe all manner of plans to overhaul American capitalism.

In the weeks ahead, the president’s strategic choices will show the country what “building” really means, to him.

Mr. Biden’s forthcoming proposals, which aides and documents suggest could cost as much as $4 trillion over the next decade, are a pivot to the core economic agenda he campaigned on: rebuilding infrastructure, revitalizing America’s competitiveness in emerging industries and reducing the barriers that hold back men of color and women in the workplace.

Mr. Biden will have the benefit of momentum in pushing them, and of a political moment that seems ripe for another large spending bill. Democrats are riding high on the public approval ratings for their coronavirus relief bill across the country. Even the most conservative Democrats in the Senate are eager to spend big again to address infrastructure concerns that have festered for a decade, and to combat widened income inequality that has helped fuel the rise of populist politicians in both parties.

A year of protests over racial justice, and an early administration focus on racial equity, has energized liberal lawmakers to move aggressively to close racial opportunity gaps in the economy. And across party lines in Washington, warnings over increased federal deficits have quieted, as lawmakers voted repeatedly over the past year to spend trillions of dollars to sustain the economy through crisis.

Still, Mr. Biden’s next economic task will be much more difficult than his relief bill, which sailed through the House and Senate with only Democratic votes. Moderate Democrats are more insistent this time that the process engage Republicans, and that at least some of the spending be paid for with tax increases that could add up to trillions of dollars. Conservatives have already lined up to reject Mr. Biden’s plans to force corporations and the rich to pay more to fund the programs.