Lordstown Motors is one of a dozen electric vehicle start-ups that have wowed investors with big plans to revolutionize the auto industry. It won acclaim for taking over a plant whose shutdown by General Motors drew the wrath of President Donald J. Trump.

But Lordstown seems far from achieving its goal of churning out electric pickup trucks starting in September and becoming a challenger to G.M. and Ford Motor.

In February, a prototype it was testing in Michigan caught fire and burned so long and so hot that there was nothing left of the rubber tires. Then, in April, another prototype dropped out of a 280-mile off-road race in Baja California after just 40 miles, performing worse than a 1980s vintage Toyota converted to run on a Nissan Leaf motor and battery. The company hasn’t begun hiring the union workers it promised would assemble its trucks even as it recently listed openings for an executive chef and a fitness coach.

Lordstown is also being investigated by the Securities and Exchange Commission, and its stock has tumbled from a high of about $30 last year to less than $8.

The swift rise and faltering prospects of Lordstown are emblematic of the recent mania for E.V. businesses that are far from making a product, let alone selling it. That frenzy has been driven by investors looking for the next Tesla, a pioneer in the industry that has a strong sales lead over other electric-car makers. And it has been enabled by Wall Street firms eager to reap profits by absorbing fledging businesses into shell companies equipped with a pile of cash and a stock exchange listing.

Even as the stock market climbs to new highs, the bottom seems to be falling out of many E.V. companies that merged with the shell outfits known as special purpose acquisition companies, or SPACs. Shares of Nikola, which is developing heavy trucks, have fallen from around $65 to about $12, for example. The S.E.C. is looking into allegations by an investment firm that Nikola made false statements about its technology. The company has denied wrongdoing, but it acknowledged in February that some of its past statements were “inaccurate in whole or part.”

The rush to list new SPACs has abated in the face of rising scrutiny from securities regulators.

“A lot of these companies are going public too early,” said Erik Gordon, a business professor at the University of Michigan who closely follows the auto industry. “They have the risk profile for venture capital and private investment. They really don’t make sense as public companies yet.”

Lordstown attracted attention because of its unusual beginning two years ago. The Lordstown, Ohio, plant it owns was built by General Motors in the 1960s, once employing several thousand union workers on three shifts a day. In 2018, G.M. announced that it was closing the factory, citing the decline in sales of the sedan built there, the Chevrolet Cruze.

Mr. Trump, who had declared at a rally the previous year in nearby Youngstown that manufacturing jobs were “all coming back,” was livid. He attacked G.M. and its chief executive, Mary T. Barra. Ohio politicians, both Republicans and Democrats, also criticized the move.

Soon after, G.M. found a buyer who promised to return auto jobs to the region: Steve Burns, the chief executive of a small electric-van business, Workhorse Group. That company had a rough design for an electric pickup truck and an electric helicopter.

Mr. Burns decided to leave Workhorse to form a new company to make the truck, and he agreed to buy the Lordstown plant for his new venture for just $20 million.

But the deal was announced so hastily — Mr. Trump had said on Twitter of Ms. Barra, “I asked her to sell it or do something quickly” — that Mr. Burns didn’t even have a name for his new company or the money to buy the factory. He turned to a small Cleveland investment bank, Brown Gibbons Lang & Company, and scored an investment from G.M., which provided a $40 million loan for the factory purchase and other expenses.

In August, Lordstown Motors announced that it was merging with a SPAC, DiamondPeak Holdings. That deal, completed in just two months, helped the company avoid the five to seven years it typically takes start-ups to establish a track record for an initial public offering. Tesla, for example, went public about seven years after it was founded.

Ben Axler, the founder of Spruce Point Capital Management, said many companies were being pressured by SPAC backers, known as sponsors, to go public before they were ready. Mr. Axler has bet against shares of some companies that merged with SPACs, though he hasn’t bet against Lordstown.

“We are seeing evidence,” he said, “that SPACs are overpaying for lower-quality businesses.”

Lordstown’s lack of seasoning should have been apparent.

In a presentation to investors, Lordstown indicated that it was relying on partners and suppliers, including Workhorse, for much of its technology and major components. But one partnership has already soured: Karma Automotive has sued Lordstown, accusing it of trying to steal trade secrets and lure away key employees.

Perhaps Lordstown’s biggest selling point to investors was that fleet operators had placed thousands of “pre-orders” for its truck, the Endurance. The S.E.C. is investigating those claims, which also figured prominently in a report by Hindenburg Research, a small investment firm that has bet against Lordstown’s stock. Hindenburg said that many of those were not binding orders and that some were placed by tiny businesses that operated no fleets.

In an appearance on CNBC in March, Mr. Burns acknowledged that pre-orders were not binding. “I don’t think anyone thought that we had actual orders, right?” he said. 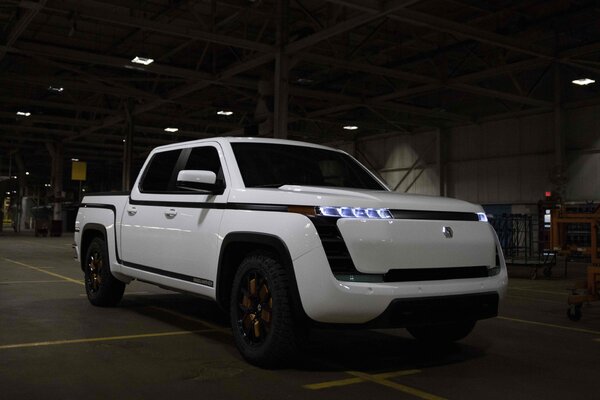 In a statement last week, Lordstown Motors said it had about 600 employees, including assembly workers who worked at the factory under G.M., and expected the number to grow to about 1,000 by August. In addition, it said it had more than 600 contractors “who are mostly specialists for different areas of production.”

But the United Auto Workers union has expressed frustration that the company hasn’t made a firm commitment to having a unionized work force, which Mr. Burns had previously said he wanted. “Any further delay in making that commitment is unacceptable,” Cindy Estrada, director of the union’s organizing department, said in a statement.

Mr. Burns, 61, owns more than 28 percent of Lordstown’s shares and is the company’s driving force. He has described himself as a serial entrepreneur, and two former employees, who spoke on the condition of anonymity because they feared reprisals, said he often compared himself to Elon Musk, Tesla’s chief executive. Before founding Workhorse in 2009, he had founded modestly successful mobile technology services businesses.

Mr. Burns’s tenure at Workhorse was decidedly mixed. Workhorse has lost money for years, and its annual revenue was never more than $10 million when Mr. Burns ran the company. One of his initiatives was a bid to supply delivery vehicles to the U.S. Postal Service. While the company was a finalist, it lost to another bidder in February.

Workhorse paid Mr. Burns $1.24 million from 2015 to 2018, according to Equilar, a firm that analyzes corporate compensation. He probably forfeited his stock options at Workhorse by resigning in 2019, but the company gave him a consulting agreement with stock options that Equilar valued at $10.7 million.

What really propelled Mr. Burns and Lordstown was the merger with DiamondPeak.

Backed by some of the principals of the New York investment firm Silverpeak, DiamondPeak raised $250 million from investors when it went public in March 2019, about a year before SPACs became the hottest thing on Wall Street. In securities filings, DiamondPeak said it would probably acquire a real estate business, which made sense because it was led by David Hamamoto, a former Goldman Sachs banker who specialized in that industry.

DiamondPeak decided to buy Lordstown after Mr. Hamamoto was introduced to Mr. Burns in June by Goldman bankers. The deal prospectus said Goldman had known Mr. Burns because of a prior investment banking relationship with him at Workhorse.

Both sides were eager. Lordstown and its backers needed more money, and DiamondPeak was on a deadline to complete a merger to comply with the terms of its initial public offering.

The merger included a fresh investment of $500 million from Blackstone Group, Fidelity Investments, Wellington Management and others.

Shares of DiamondPeak, later renamed Lordstown Motors, took off even before the merger closed. Some of the sponsors of DiamondPeak registered a prospectus late last year to allow them to sell some of their shares in the combined company, along with other investors in the financing deal. Included in the prospectus were some of the bankers at Brown Gibbons Lang, an investment bank, and lawyers with BakerHostetler, a Cleveland-based law firm that reviewed the financing package. Altogether, insider sales have totaled $11 million since the end of December.

BakerHostetler declined to comment. Representatives for Brown Gibbons and officials with the SPAC’s sponsor — affiliates of Mr. Hamamoto and some of the principals of Silverpeak — did not return phone calls.

Between its part of the $500 million investment package and previous financing deals, G.M. has accumulated 7.5 million shares in Lordstown; it has not sold any, a G.M. spokesman said.

One recent morning, about 260 cars were in the parking lot of the Lordstown factory, which can hold thousands. Trucks rumbled by, but most were headed to a battery factory that G.M. is building nearby.

The town’s mayor, Arno A. Hill, visited the Lordstown Motors plant recently and saw the areas where battery packs and motors will be assembled. “I will tell you they have been moving forward,” he said.

He said he was not concerned about the concerns raised by Hindenberg Research. But he noted that the Mahoning Valley region, which includes Lordstown, had been promised jobs many times. “We’ve been the land of broken promises,” he said. “We’ve had a lot of people come through and promise the sun, the moon and the stars.”