NEW YORK (Reuters) – Warren Buffett on Saturday forcefully defended Berkshire Hathaway Inc’s (BRKa.N) decision to invest heavily in stocks of companies such as Apple Inc (AAPL.O) as he labors through a four-year drought since his last major acquisition of a company.

Buffett, 89, also used his annual letter to Berkshire shareholders to assure they should not worry about the future of the company, which is “100% prepared” for when he and 96-year-old Vice Chairman Charlie Munger are no longer around.

Berkshire also posted record full-year earnings of $81.42 billion, nearly twice the prior high from 2017, boosted by unrealized gains from its stock investments. Operating profit, however, fell 3% to $23.97 billion.

The Omaha, Nebraska-based conglomerate ended the year with a $128 billion cash hoard, after repurchasing $2.2 billion of stock in the fourth quarter and $5 billion in 2019.

“I do think it’s on the right path,” said James Armstrong, president of Henry H. Armstrong Associates in Pittsburgh, which invests one-fourth of its assets in Berkshire. “Its balance sheet is exactly the type of toolkit you’d like to leave a successor.”

It also invests in such companies as American Express Co (AXP.N), Bank of America Corp (BAC.N) and Coca-Cola Co (KO.N).

Berkshire ended the year with a $128 billion cash hoard, having made no major acquisitions since paying $32.1 billion in January 2016 for aircraft parts maker Precision Castparts, and Buffett lamented his inability to find big companies to buy.

“The opportunities to make major acquisitions possessing our required attributes are rare,” he wrote.

Buffett’s letters have grown shorter in recent years, with less humor and less discussion about the economy and investing.

James Shanahan, an Edward Jones & Co analyst who rates Berkshire a “buy,” called Saturday’s letter a missed opportunity to show how Berkshire, whose stock has trailed the Standard & Poor’s 500 .SPX over the last decade, is undervalued.

“It felt much more businesslike and detached, and lost some of the wisdom that made it so entertaining,” he said.

The record profit is largely the result of an accounting rule that Buffett urges investors to ignore, requiring Berkshire to report paper gains and losses from its stock holdings with net income.

Buffett, whose $90.2 billion net worth makes him the world’s fourth-richest person according to Forbes magazine, said that while he still prefers buying whole companies, stocks are a better bet than low-yielding bonds.

He attributed that in part to the “American Tailwind,” or the economy’s ability to grow despite roadblocks such as war, high inflation and financial panic.

“If something close to current rates should prevail over the coming decades and if corporate tax rates also remain near the low level businesses now enjoy, it is almost certain that equities will over time perform far better than long-term, fixed-rate debt instruments,” he wrote. 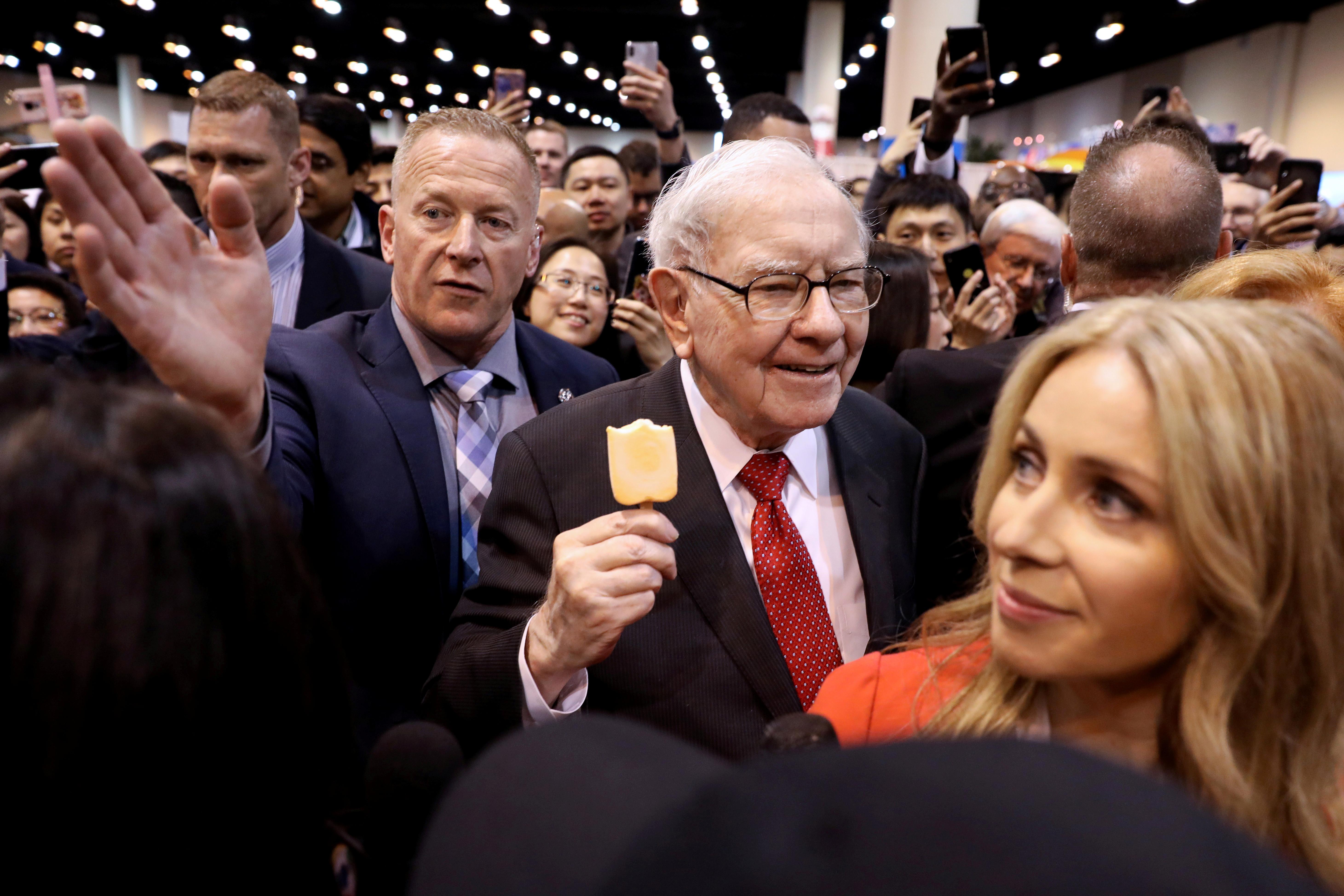 “I was expecting him to say the market was expensive,” Dodson said. “He didn’t even hint that.”

The cash stake has nonetheless been a drag for investors.

Buffett also used his letter to comfort investors that Berkshire will be in good hands after he leaves.

In 2018, Berkshire promoted Greg Abel, 57, and Ajit Jain, 68, to vice chairmen, giving them oversight of Berkshire’s non-insurance and insurance operations, respectively, and freeing Buffett and Munger to focus on deploying capital.

“Charlie and I long ago entered the urgent zone,” Buffett wrote. “That’s not exactly great news for us. But Berkshire shareholders need not worry: Your company is 100% prepared for our departure.”

He also said shareholders will be able to ask Abel and Jain questions at Berkshire’s annual meeting on May 2, where Buffett and Munger normally do most of the talking.

“I’m comfortable with how Berkshire is moving up the next generation,” said Thomas Russo, a partner at Gardner, Russo & Gardner in Lancaster, Pennsylvania, a longtime Berkshire shareholder.

Buffett said his estate may need 12 to 15 years to dispose of his Berkshire stock, which is going to charities including the Bill & Melinda Gates Foundation, and Berkshire stock will be “a safe and rewarding investment” during that time.

The disposal plan “gives investors the ability to focus on everything else,” said David Marcus, chief investment officer at Evermore Global Advisors, who personally owns Berkshire shares. “If Buffett weren’t the age that he is, it wouldn’t matter.”