London’s second-busiest airport is to close one of its two terminals after a slump in flights triggered by the COVID-19 pandemic.

Sky News has learnt that Gatwick Airport has decided to temporarily shut its north terminal – used by carriers including easyJet – from the end of the month.

The decision, which is expected to be announced later on Friday, stops short of a full closure of Gatwick, although that option is understood to be being kept on the table as repatriation flights come to an end. 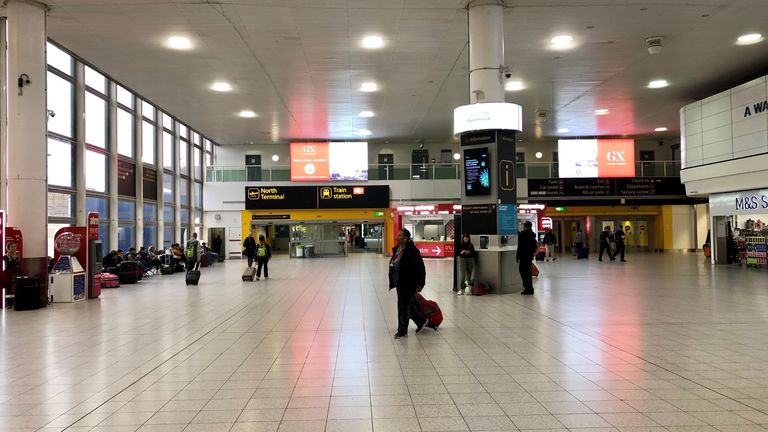 London City Airport has already announced its closure for several weeks, while Heathrow and Stansted, as well as numerous regional airports, have seen catastrophic falls in passenger volumes since the coronavirus outbreak.

Airport operators are in talks with the government about a rescue package as their revenues crash to their lowest-ever levels.

Rishi Sunak, the chancellor, wrote to aviation bosses this week to tell them that a “bespoke” support package might be available to individual companies once private sources of capital have been exhausted.

Gatwick is majority-owned by VINCI, the largest private airport operator in the world.

It serves 46m passengers each year, flying to 230 destinations in more than 70 countries.

Last week, Gatwick announced that Stewart Wingate, its chief executive, and his executive team would take a 20% salary cut and waive any bonus for the current financial year.

It also said it was axing 200 staff employed on temporary fixed-term contracts and contractors.

Further cost-cutting measures are expected in the coming weeks.

“Gatwick is a resilient business, but the world has changed dramatically in recent weeks and we have been forced to take rapid, decisive action to ensure that the airport is in a strong position to recover from a significant fall in passenger numbers,” Mr Wingate said last week.