Apple has reported a hit to key iPhone sales as coronavirus lockdowns, beginning in China, forced stores to close and customers online-only.

The second quarter of the tech firm’s financial year, January to March, saw overall revenue rise by just 1% to $58.3bn – knocked by a fall of almost 7% in smartphone sales to $28.9bn compared to the same period last year.

The company pointed to a sharp decline in premium phone sales in China – its key growth market – from the end of January through February but said sales there were now heading in the right direction as COVID-19 social distancing measures had been relaxed and stores re-opened. 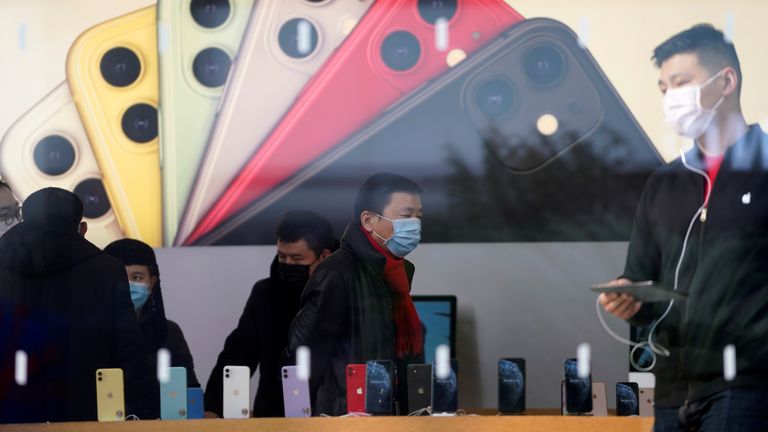 Apple said its revenue performance was protected by a surge in demand for services such as its Apple TV streaming operation as other markets, in Europe and North America, entered their own lockdowns later in the period.

It had warned in February that revenue was likely to fall short of its initial forecast range of up to $67bn because of the closure of factories where its products are made in China and sales moving online only as stores were forced to shut.

Apple signalled its supply chain was now back to normal after the disruption but because of continued uncertainty over sales elsewhere globally, it would not currently be releasing any new guidance on its financial future.

The company’s figures showed that Mac and iPad sales were also down on the same period last year. Services, which also include iCloud storage and music streaming, hit $13.4bn for the quarter – a record.

It pointed to 515 million subscribers for apps and services – a rise of 125 million on a year earlier.

But investors seemed less than convinced by the update, given the lack of guidance, with shares dipping by almost 2% in extended trading in contrast to relief rallies for Google and Facebook stock after they reported earlier in the week.

Apple CEO Tim Cook told shareholders: “Despite COVID-19’s unprecedented global impact, we’re proud to report that Apple grew for the quarter, driven by an all-time record in Services and a quarterly record for Wearables.

“In this difficult environment, our users are depending on Apple products in renewed ways to stay connected, informed, creative, and productive.”