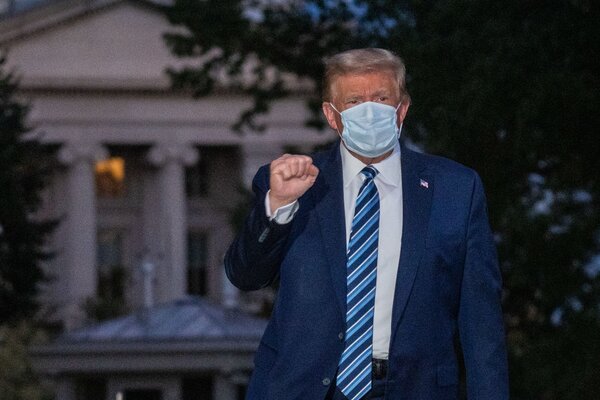 Good morning. (Was this email forwarded to you? Sign up here.)

President Trump has returned to the White House after a three-day stay at Walter Reed National Military Medical Center for treatment of his Covid-19 infection. But speculation that he might adopt a more cautious attitude toward the disease was quickly erased.

“Don’t let it dominate your lives,” Mr. Trump said of the coronavirus in a video recorded at the White House last night. “Don’t be afraid of it. You’re going to beat it.” Meanwhile, his administration is blocking proposed federal guidelines requiring strict scrutiny of potential Covid-19 vaccines, which he described in the video as coming “momentarily.”

His words may pose problems for business reopenings. They could make some people more cavalier about coronavirus protection measures, including at the office, said Robert Rabin of Stanford Law School. (“We’re going back to work,” Mr. Trump said. “Get out there.”) This raises questions about employers’ and business venues’ liability for infections, as Republicans continue to advocate a legal liability shield for companies as part of any stimulus deal.

• The purpose of liability law is to incentivize responsible behavior by making irresponsibility costly, said Justin Wolfers, a professor of economics and public policy at the University of Michigan. “We’d expect to see many more irresponsible choices being made” by those taking the president’s comments to heart, he said.

What happens next? Mr. Trump said he would return to the campaign trail “soon,” with polls taken after his diagnosis showing no sympathy bounce. The stock market is up from its level before the president’s test was announced, which many take as a sign that investors are pricing in odds of a more decisive victory by Joe Biden, reducing fears of a contested result.

• A “blue wave” result, in which the Democrats control all arms of government, would result in higher corporate taxes and special levies on foreign income, which would hit high-flying tech firms the hardest. At the same time, unified control would make a big stimulus bill more likely, which would “at least match the likely longer-term tax increases on corporations and upper-income earners,” Jan Hatzius, Goldman Sachs’ chief economist, wrote in a new research note. 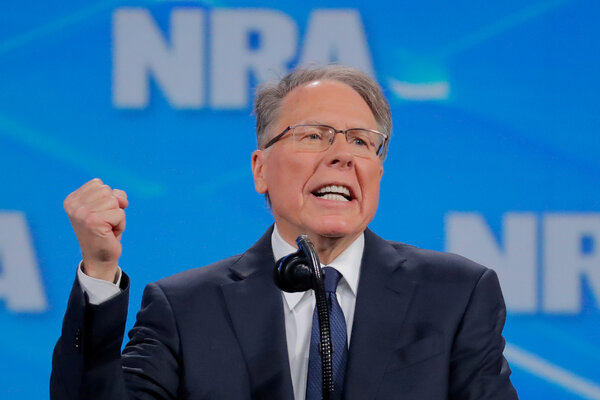 Gov. Andrew Cuomo blocks neighborhood lockdowns in New York City. The New York governor said Mayor Bill de Blasio’s plan to shut nonessential businesses where infection rates were rising would have been ineffective. It’s the latest conflict between the governor and the mayor, adding to the angst and uncertainty around New York’s economy.

The I.R.S. is reportedly investigating the National Rifle Association’s chief for criminal fraud. At issue is whether Wayne LaPierre underreported his income by not declaring benefits like yacht trips and safaris, according to The Wall Street Journal.

Related posts:
Best News
Coronavirus: India hits eight million COVID cases amid fears festival season could cause further spike
Analysis: Exchanges, retail brokers, say they are ready for any post-U.S. election volatility
Celebrity Vetting and ‘Helping the President’ to Defeat Coronavirus Despair
What Christmas 2020 will be like as UK faces deadly coronavirus second wave
Too few companies disclose financial hit from climate change, regulator says
Recent Posts
This website uses cookies to improve your user experience and to provide you with advertisements that are relevant to your interests. By continuing to browse the site you are agreeing to our use of cookies.Ok