Home » Business » For Shell, Oil Is Past Its Peak 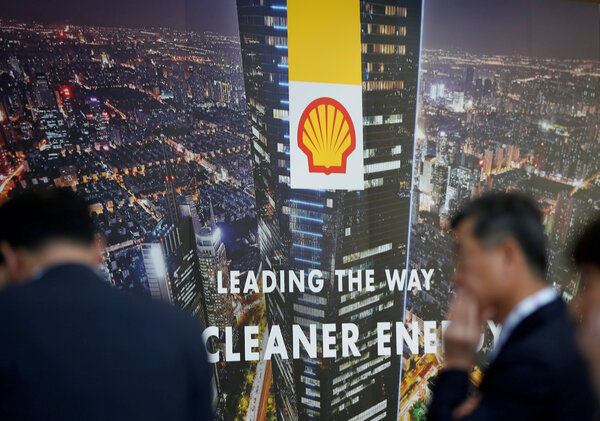 With an announcement yesterday — buried in fine print — that its total oil production had peaked in 2019, Royal Dutch Shell made a bold statement about the end of the oil age. Now comes the hard part for the energy giant, writes The Times’s Stanley Reed.

Shell will still be in the oil business for a long time. The company said its petroleum production would drop by at least 1 percent per year, but added that demand would not disappear overnight. “Even as the world decarbonizes, it will still need oil and gas for decades to come,” said Ben van Beurden, Shell’s C.E.O. While global oil demand has risen somewhat from the depths of the pandemic, McKinsey forecasts that overall demand for oil will peak in 2029.

The company has won praise for its climate change plans, including emissions-reduction targets that encompass not only its own production of greenhouse gases, but also those produced by, say, cars fueled by Shell gasoline. The company is using its energy-trading division to supply businesses with clean energy and may roll out other services like carbon capture and storage.

“There is no wriggle room” in Shell’s plans, said Adam Matthews, an official with the Church of England Pensions Board, which has pressed Shell on emissions reduction.

Shell has a fine line to walk. It will rely on oil production to help finance its conversion to renewable energy sources like wind, solar and hydrogen. Its current plan is to invest $2 billion to $3 billion a year in renewable energy assets — out of a $22 billion capital investment budget.

The approach is more conservative, in some ways, than at rivals like BP and Total, which have invested in green energy sources at sometimes high prices. And climate activists remain unconvinced: Greenpeace UK declared that without specific commitments on oil production cuts, Shell’s strategy cannot “be taken seriously.”

Day 3 of the impeachment trial. House impeachment managers wrapped up their case, saying that former President Donald Trump could still foment violence if he were allowed to run again. Mr. Trump’s legal team is set to present their closing arguments today, but Republican senators already appear inclined to acquittal.

The Biden administration buys an additional 200 million Covid-19 vaccine doses. President Biden said the U.S. had exercised options in its contracts with Pfizer and Moderna to give it enough doses to inoculate every American adult by the end of July.

Maryland readies America’s first digital ad tax on tech giants. Lawmakers are set to override the governor’s veto of the proposal, which would tax advertising revenue of companies like Amazon, Facebook and Google. The proposal, which is similar to laws enacted in Europe, faces legal challenges.

Regulators search for signs of market manipulation in the meme-stock frenzy. The Justice Department and the S.E.C. have reportedly subpoenaed brokers like Robinhood, The Wall Street Journal reports. Separately, Vlad Tenev, Robinhood’s C.E.O., and Ken Griffin, the head of Citadel, may testify at a House hearing into the trading mania next week.

The battle over Botox

There’s a fight brewing over Botox, and it could put the wrinkle-reducing pioneer’s cheaper competitor, Jeuveau, out of business. At stake are about 120 jobs and a potential new role for the U.S. International Trade Commission in managing global disputes over trade secrets in an antitrust context.

The back story. Botox accounts for a large share of its parent company Allergan’s business, which was a key appeal to AbbVie when it bought Allergan for more than $60 billion in 2019. Botox had, until recently, near sole control of the injectable wrinkle smoother market, but it did not have patent protection. New entrants, including Evolus, which makes Jeuveau, have begun to emerge. In 2019, Allergan filed a complaint with the I.T.C. against Evolus and its South Korean manufacturer, Daewoong, accusing Daewoong of stealing trade secrets from Allergan’s Korean partner, Medytox.

Last month, the I.T.C. blocked Daewoong’s imports for 21 months. The order is subject to a 60-day review by the White House, which expires on Monday; presidents have rarely used this power to overturn these decisions. Evolus warned of an “existential threat” to its business if the ruling is upheld.

A legal wrinkle. Evolus contends that the I.T.C. is overstepping its bounds by weighing in on a dispute in South Korea, giving Allergan the power to use the body’s authority to limit competition. “The potential for the abuse that we see in this case to replicate itself is tremendous,” said Daniel Zaheer, a partner at Kobre & Kim who represents Daewoong. Allergan referred to a statement it made after the I.T.C.’s ruling that it “supports a marketplace that encourages product development and innovation and we welcome fair and lawful competition.”

To add even more complexity to this case, the dispute will soon move to the F.D.A., with Daewoong planning to file a petition with the agency to investigate allegations that Medytox submitted falsified records to gain approval for another wrinkle-reducing product, Innotox. Allergan owns the rights to sell Innotox outside of Korea if it is approved by regulators.

After Tesla announced that it had bought $1.5 billion worth of Bitcoin, Mastercard said it would soon support cryptocurrencies and Bank of New York Mellon shared plans for custody services, executives across the corporate world were asked this week whether they were considering shifting cash into crypto. “Just a follow-up,” a Morgan Stanley analyst asked G.M.’s chief, Mary Barra, on the carmaker’s recent earnings call. “It’s a question on Bitcoin. It’s inevitable.” Here’s how Ms. Barra, and others, have responded:

“We don’t have any plans to invest in Bitcoin, so full stop there. This is something we’ll monitor and we’ll evaluate.” — Mary Barra, C.E.O. of General Motors

“It’s a conversation that’s happened that has been quickly dismissed. We’re going to keep our cash safe.” — Dara Khosrowshahi, C.E.O. of Uber, on CNBC

“My understanding is currently the accounting is different than other currencies and can create more volatility. So we’re not currently doing it.” — Leslie Barbi, chief investment officer of Reinsurance Group of America

“We’re not going to invest corporate cash, probably, in sort of financial assets like that.” — John Rainey, C.F.O. of PayPal, on CNBC

Some of the academic research that caught our eye this week, summarized in one sentence:

The largest expansion of unemployment benefits in U.S. history had a much weaker effect on the unemployed putting off job searches than predicted. (Peter Ganong et al)

After an exchange is hacked, the volatility in Bitcoin prices doesn’t really show up until five days later. (Klaus Grobys)

Corporate sustainability metrics are as susceptible to short-term pressure to massage the numbers as other financial measures. (Alex Edmans)

Banks, funds and financiers are the main players in the SPAC boom, but they’re not the only ones sponsoring blank-check companies. Some nonfinancial firms are also getting in on the act: This week, Post Holdings, the parent company of Raisin Bran, filed to raise $400 million for a SPAC aimed at acquiring a consumer company. The media conglomerate Liberty Media also has a SPAC, while Medtronic backed a SPAC co-founded by Intel’s chairman, Omar Ishrak.

What’s the deal? For established corporations, why go the roundabout SPAC route and not just buy a company outright? We asked around, and experts said that a SPAC gives a company the chance to invest in a business that may not fit naturally in its portfolio, or one that may be too pricey to acquire in the traditional way. This could be particularly true in industries in which young, fast-growing companies command large premiums. A younger brand that merges with a corporate SPAC could lean on the sponsor’s experience but have its own listing that highlights its stand-alone business more clearly than if it was a division of a larger group.

As we’ve recently discussed, the economics of SPACs are also very beneficial to sponsors. In the case of corporate SPACs, those benefits would also extend to shareholders of the sponsor.

Another obstacle to work force diversity

As companies try to promote a more diverse workplace, we’ve covered the hurdles they face, real and perceived. Talenya, an artificial intelligence company, analyzed over 10 million résumés and gave us a look at statistics that may explain why recruiters overlook certain job candidates: Women and racial and ethnic minorities appear to undersell their talents.

White men, on average, list 77 skills on their profiles, versus 63 for all women, and less for Black and Hispanic candidates of all genders.

Women, on average, put 34 percent less text than men on their public profiles on sites like LinkedIn when describing their careers and achievements.

The findings may help recruiters conduct searches with a different lens. “If the recruitment process, including everything from job descriptions to interview questions, is focused on competencies and capabilities, companies will be able to open up their aperture to include more talent from different backgrounds,” said Tamika Curry Smith, president of the TCS Group and a board adviser to Talenya. Today, Talenya is launching an A.I. tool that it says sifts through résumés to determine what skills candidates actually have.

Kraft Heinz agreed to sell Planters and its other nut brands to Hormel for $3.35 billion. (CNBC)

A close look at the Biden administration’s ambitious plans to revive the U.S. economy — and whether they stand a chance of succeeding. (NYT Magazine)

In a bipartisan push, two senators urged the Treasury Department to accelerate putting Harriet Tubman on the $20 bill. (NYT)

Revenue from Uber’s food-delivery business nearly matched that of its core ride-hailing division in the fourth quarter. (NYT)

Officials in Miami, which has been courting tech executives, are studying whether to adopt Bitcoin as an option for employee compensation and payment for city services. (Miami Herald)

Start-ups are hacking whiskey, distilling “aged” spirits in days instead of decades. (NYT)