A little more than two years into David M. Solomon’s tenure as chief executive of Goldman Sachs, at least nine senior executives have left or intend to leave soon. It’s an unusually large number for a firm long defined by its tight-knit partnership culture.

Since the beginning of the year, four key executives have announced plans to leave, according to internal emails and employees: Goldman’s top lawyer, one of its heads of asset management, one of its few Black female partners and the head of its consumer banking business. Other senior executives, including one of the heads of investment banking, announced plans to step down late last year. All in all, five members of the firm’s management committee, its topmost governing body, have left or given notice within the past five months — roughly a sixth of the entire group.

The exodus is partly a reflection of the approach taken by Mr. Solomon, a 59-year-old longtime investment banker who became chief executive late in 2018. He has sought to refashion Goldman, which went public more than two decades ago, into a more traditional public company, say current and former partners. That has produced a more top-down, hierarchical culture in which the institution is bigger than its people and Goldman’s old-fashioned partnership structure — which imparts not only added pay and benefits but also a sense of family to the firm’s top players — is less relevant, these people say.

Goldman plans to replace most of the people who are leaving, and expects to do so easily, said company officials.

“The firm is well on its way to meeting the goals we set, and investors seem to appreciate the changes, the greater transparency, and the clear direction we’ve put in place,” said Jake Siewert, a Goldman spokesman, in a nod its stock price, which is trading at about $330, an all-time high. “It’s an important part of Goldman tradition for partners to leave for a wide range of new pursuits, and we wish them well.”

Mr. Solomon stepped into his job about two and a half years ago when Lloyd C. Blankfein, who saw Goldman through the financial crisis, retired. An avuncular, Harvard-educated former gold salesman, Mr. Blankfein was known for his sharp intellect and self-deprecating quips. “How far down into the partnership do I have to go to find a partner who will listen to me?” he used to joke, according to partners. He sometimes likened his role to that of the senior partner at a law firm. 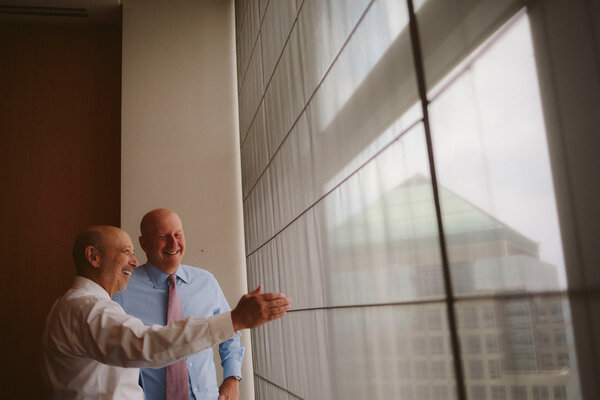 Even though Goldman hasn’t been a true partnership since 1999, when it went public, previous chief executives, including Mr. Blankfein, were deferential to that aspect of the firm’s culture. Partners, who were named every two years, were feted at a black-tie dinner dance known internally as the “prom.” Once part of the group, they often had spirited debates about promotions and firm strategy.

The partnership was once powerful enough that when high-performing employees were wooed by other companies, their colleagues and bosses were often able to use their personal connections — along with increased pay and promotional opportunities — to reel them back.

Mr. Solomon took a different approach. He streamlined Goldman’s structure, creating a new consumer wealth management unit to house its Marcus retail banking division alongside its money management unit for rich individuals, while focusing the traditional asset management business on investment funds. He sought to trim costs, potentially including payouts to partners, who typically make millions of dollars in yearly pay. And he pruned the 550-member partnership to closer to 400. Under Mr. Solomon, the partner prom was downgraded to cocktails, with a buffet dinner and no dancing.

Mr. Solomon also has tried to diversify Goldman’s ranks to include more women and people of color. He named women to the posts of treasurer and head of strategy, and added two Black executives to the management committee.

He also presided over a banner 2020, in which the firm churned out nearly $1 billion in revenue a week, its best results in 11 years, and reported its second-highest profits ever.

In a brief note to investors on Tuesday entitled “GS: Poached Again; Harvard of banks,” the banking analyst Mike Mayo wrote that Goldman remained strong and that Mr. Solomon “has indicated that the partnership ranks were too top heavy, and some churn should be expected.”

When the pandemic started, Goldman — like all other firms — struggled to balance bringing employees back to the office, where they could be more collaborative and better mentored, and letting them work from home to avoid getting sick.

Mr. Solomon, who worked from the bank’s downtown Manhattan headquarters all along, had initially been flexible about letting Goldman employees trade and advise clients remotely. Sheila Patel, the 51-year-old chairwoman of the asset management division, worked from her vacation home in New Zealand. Ms. Patel was among those who eventually left, retiring from the firm in December. Marco Argenti, the co-chief information officer, was in his home in Seattle. Thousands of others worked from home, in locations as varied as second homes and the master bathroom of their parents’ house.

But before long, say current and former partners, Mr. Solomon began pressuring some managers — especially partners — to return to the office. Some partners bristled at the appearance of Mr. Solomon questioning their productivity because they weren’t in the office. Others questioned his mandate that meetings of the management committee be held at Goldman headquarters, say current and former partners. Some believed that the meeting could just as easily be done from home — especially because the 32 committee members ended up spreading out over multiple conference rooms and conducting their affairs via video feeds to obey social-distancing protocols.

Late in March, Gregg Lemkau, the longtime co-head of investment banking and an executive who was widely considered a potential Goldman C.E.O., sent a Twitter post about getting up during the wee hours to work remotely from his home in Hawaii, which is six hours behind New York.

He soon got a call from Mr. Solomon, who was not pleased with the perception of the message, say three people with knowledge of the call. The two executives argued, those people said, over whether Mr. Lemkau should return to New York. They settled their differences and Mr. Lemkau stayed put for two months before flying back. In mid-November, Mr. Lemkau, then 51, announced plans to retire from Goldman to become chief executive of the family investment office of Michael Dell, the billionaire founder of the computer company.

“The reaction was overwhelming,” said Mr. Lemkau in a podcast weeks later. The memories colleagues shared, he said, underscored how his treatment of other people had defined him. “Not the big deals I did, not anything formal I did, but the little things that you did that made a difference in their lives,” he reflected, “it sort of makes you feel like, ‘Damn, I’m glad it was worth doing all that stuff.’”

Mr. Lemkau has told people privately that his departure had nothing to do with his tiff with Mr. Solomon.

The exodus picked up steam this year. Last month, Michael Daffey, who had led the global markets division, retired.

Then, this week, Eric S. Lane, co-head of the firm’s asset-management business and also viewed as a contender for the Goldman C.E.O. role, took a senior role at a large hedge fund. Karen Patton Seymour, the firm’s general counsel since 2019, also left, and plans to return to her former law firm, according to internal emails. All were members of the management committee, and all but Ms. Seymour had long tenures at the firm. Around the same time, Omer Ismail, head of Goldman’s Marcus consumer business, left to run a new financial-technology venture that has been seeded by Walmart, taking a deputy who had overseen the firm’s Apple credit card partnership along with him.

Stephanie Smith, a consumer wealth management partner and one of just five Black female partners at the firm, has also exited to take an executive role at BlackRock, say three people with knowledge of her talks. BlackRock, the giant asset manager, had tried and failed to recruit her about five years earlier, two of the people said.

Ram Sundaram, a senior trading executive known for structuring complex bond deals, left this year, as did Jason Mathews, who ran a U.S. stock-product sales desk and was one of roughly half a dozen Black male partners.

For many, the moment was bittersweet.

In an email, Mr. Mathews said he was “extremely proud to be able to call G.S. home for the last 20 years.” The firm, he added, “is still and always will be a place where everyone works their tail off to get better every day — no matter what challenge is in front of them.”