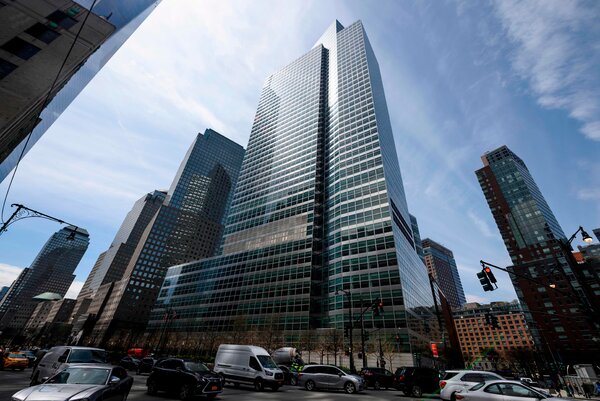 A change of messenger at Goldman Sachs

For nearly a decade, Jake Siewert led Goldman Sachs’s post-crisis efforts to shed its image as one of Wall Street’s most mysterious, and maligned, money machines. We’re the first to report that he plans to announce his departure later today.

Mr. Siewert joined Goldman as its communications chief in 2012, bringing both political connections — he was a top aide to Tim Geithner when he was Treasury secretary, and spent eight years in the Clinton administration, including as White House press secretary — and experience as a senior executive at Alcoa. (Mr. Siewert’s wife, Christine Anderson, is the global head of external relations at Blackstone.)

He did not have an easy job: The day after his hiring was announced, a former Goldman banker published a now-famous Op-Ed, “Why I Am Leaving Goldman Sachs,” accusing the firm of fostering a “toxic and destructive” environment. As he departs, disgruntled junior bankers at the firm have made headlines.

His primary task was erasing Goldman’s reputation as a “great vampire squid.” That meant demystifying the firm, putting its executives more in the public eye and repairing relationships with policymakers and the media. Mr. Siewert helped push Goldman into podcasting and social media at a time when neither was common practice at a Wall Street bank. More recently, he was involved in the launch of Marcus, the online retail banking division that has become a key source of growth for the firm. Surveys suggest that Goldman’s public reputation has improved markedly since the financial crisis.

Now, Mr. Siewert is headed to Warburg Pincus to effectively become a political and policy adviser. The role — which will take him away from P.R. and see him working for both the firm and its portfolio companies — reunites him with Mr. Geithner, who has been Warburg’s president since 2014. Mr. Siewert’s departure is amicable, according to people with knowledge of the matter, though he was considered closer personally to Lloyd Blankfein, the Goldman C.E.O. who hired him, than the current chief, David Solomon.

In other news, the bank recently hired Andrea Williams, the communications and branding chief at the investment firm Oaktree Capital, as its top media relations executive. At Oaktree, she worked closely with Howard Marks, the firm’s outspoken co-founder.

China’s economy booms, but not everyone is sharing in it. The country’s G.D.P. grew a jaw-dropping 18.3 percent in the first quarter compared with the same time last year — though that partly reflects the pandemic shutdown of 2020. The surge was tied to exports and infrastructure spending, but Beijing’s big challenge remains persuading consumers to spend more. (The latest U.S. data suggest Americans are doing that with gusto.)

Voters like President Biden’s $2.3 trillion infrastructure plan. A new poll for The Times showed that two-thirds of Americans (and nearly three-quarters of independent voters) backed the proposal. No Republican lawmakers have publicly supported the proposal, and they hope to spur opposition by focusing on likely increases in corporate taxes, though some corporate leaders have tentatively backed higher rates.

The White House threatens to cut Russia’s ties to the global financial system. The Biden administration barred American banks from buying newly issued Russian government debt, part of sanctions imposed in retaliation for the Solar Winds hack. The short-term impact is likely small, but experts say it is a symbolic step that signals a willingness to isolate Moscow.

Vaccinated people may need a third booster shot. The additional dose of a Covid-19 vaccine would come at least six months after their second, Pfizer’s C.E.O., Albert Bourla, said yesterday. Longer term, annual boosters may be required to guard against new virus strains; already, parts of London are seeing an uptick in cases involving the South African variant, including in some people who received at least one dose of vaccine.

Elliott may start a fight at GlaxoSmithKline. The big activist hedge fund has taken a multibillion-pound stake in the British medical and consumer products giant, DealBook has learned. The Financial Times, which first reported the news, said it came as other investors expressed worries that the company was underperforming, particularly in its drug pipeline.

Jeff Bezos lays out his legacy

Amazon published its founder’s latest letter to shareholders yesterday. It is likely the last such letter written by Jeff Bezos as C.E.O., since he plans to step down later this year and become executive chairman. In the letter, Mr. Bezos, the richest man in the world, laid out his view of Amazon’s impact during his 27-year tenure.

Mr. Bezos calculated the value he thinks Amazon creates for society. The total came to $301 billion last year, he said, with more than half going to customers (via time savings and the cost improvements of cloud computing), followed by employees (via compensation), third-party sellers (via profits from selling on Amazon) and finally shareholders (via the company’s net income). “Draw the box big around all of society, and you’ll find that invention is the root of all real value creation,” Mr. Bezos wrote. “And value created is best thought of as a metric for innovation.”

But “money doesn’t tell the whole story,” he wrote, and there is naturally a lot left out of such an expansive equation. If anything, using net income to measure Amazon’s value to shareholders understates its impact, since the company’s market cap grew by more than $700 billion last year. Elsewhere in the letter, Mr. Bezos noted that Amazon’s market value has grown by $1.6 trillion since its founding, which suggests that shareholders (Mr. Bezos among them) might rank higher — if not highest — in the accounting of who benefits most from Amazon’s operations.

Mr. Bezos said that Amazon’s goal is to become “Earth’s Best Employer and Earth’s Safest Place to Work.” He disputed the characterization of Amazon warehouse employees as “being treated as robots” (the jobs have been criticized over workplace safety measures during the pandemic, algorithmic management and productivity quotas), and highlighted Amazon’s $15 minimum hourly wage, which one study suggested led to increased wages at other businesses nearby.

Mr. Bezos also addressed the recent union election at an Amazon warehouse in Bessemer, Ala., which Amazon won by a wide margin. “Does your Chair take comfort in the outcome of the recent union vote in Bessemer? No, he doesn’t,” Mr. Bezos wrote, adding that Amazon needs to “do a better job for our employees.”

The letter ended on a philosophical note. “We all know that distinctiveness — originality — is valuable,” Mr. Bezos wrote. “We are all taught to ‘be yourself.’ What I’m really asking you to do is to embrace and be realistic about how much energy it takes to maintain that distinctiveness. The world wants you to be typical — in a thousand ways, it pulls at you. Don’t let it happen.”

“This is the healthiest we have seen the consumer emerge from a crisis in recent history.”

— Jane Fraser, the C.E.O. of Citigroup, reporting a tripling of profit in its latest quarter.

Greenlight Capital’s quarterly report is out and the hedge fund’s founder, David Einhorn, has a lot to say.

He blames Chamath and Elon for the GameStop frenzy. “The real jet fuel on the GME squeeze came from Chamath Palihapitiya and Elon Musk, whose appearances on TV and Twitter, respectively, at a critical moment further destabilized the situation,” Mr. Einhorn wrote.

Of Mr. Musk, Mr. Einhorn said that regulators should have given him “more than a light slap on the wrist when they accused him of manipulating Tesla’s shares in 2018. The laws don’t apply to him and he can do whatever he wants.”

He’s not a fan of payment for order flow, which is how Robinhood makes money on free trading. It’s “just disguised commission,” Mr. Einhorn said.

A New Jersey deli worth $100 million on the stock market is a warning sign, he said of the peculiar penny stock. “The pastrami must be amazing,” he wrote. “Small investors who get sucked into these situations are likely to be harmed eventually, yet the regulators — who are supposed to be protecting investors — appear to be neither present nor curious.”

IBM’s post-pandemic guide to working in an office

Wondering what the office will be like when you go back? So are millions of other workers, and employers are trying to prepare them for it. IBM has designed a “reorientation” program to help its employees adjust when they return to a familiar setting and find a host of unfamiliar new procedures. DealBook spoke with Joanna Daly, the company’s vice president of talent, about it.

IBM made a “day in the life” video to show employees what to expect. One version of the 11-minute-long video seen by DealBook starts with “Paul” taking his temperature before going to the office, where he experiences all the new Covid precautions, like one person allowed in the bathroom at a time, one-way staircases and masking requirements. IBM is also distributing an 18-page presentation depicting “Sonia’s’’ return to the workplace (that’s her above chatting with colleagues), a back-to-work manual of sorts.

“It’s sort of like the first day of school,” Ms. Daly said. “A day early, kids go and get to see the classroom or see how things work.” It’s needed, she said, because “this is not simply returning to the workplace as it existed before or the ways of working as it existed before.” The company, which has 346,000 employees, hasn’t set a strict timeline for when its U.S. workers will return to the office. IBM’s chief executive, Arvind Krishna, has said he expects 80 percent of them will work in a hybrid fashion when they do.

Walmart invested in Cruise, G.M.’s autonomous-vehicle division, at a $2.75 billion valuation; the deal could help build out the retailer’s home-delivery network. (Bloomberg)

A bipartisan group of lawmakers banded together to push for eliminating caps on deductions for state and local taxes; progressives oppose the move as a giveaway to the wealthy. (CNBC, Insider)

An investment fund tied to the Teamsters, which is a shareholder in Uber, urged the company to disclose more about its lobbying efforts. (Insider)

“For Big Tech whistle-blowers, there’s no such thing as ‘moving on’” (Protocol)

Inside the struggle over diversity and inclusion policies at Dalton, the elite New York City private school. (Vanity Fair)

Bid farewell to a staple of corporate uniforms: Patagonia will stop putting company logos on its fleece vests. (Inside Hook)

The denim cycle is moving back toward looser jeans, inspired by comfort-first pandemic dressing. (NYT)