In an episode of the Korean television show “The K2,” which takes place in a world of fugitives and bodyguards, a man is being treated with a defibrillator when he enters into a dream state. On the fringe of death, he recalls taking a past love to a Subway restaurant and to a park for a picnic, where he gently feeds her a sandwich and soft drink with the Subway logo facing the camera.

The detail is not a narrative quirk. It is a result of South Korea’s broadcasting regulations and the aggressive use of product placement in the country’s shows by Subway, the American sandwich chain famous for its $5 foot-longs.

“People joke, ‘If I had a drink every time Subway popped up, I’d be drunk before the first half is over,’” said Jae-Ha Kim, a journalist in Chicago who reviews Korean dramas. “Everyone here’s like, ‘I never got a Subway sandwich that looked that good, with that much meat.’”

Product placement in TV shows is a reality the world over. But South Korea’s terrestrial stations are prevented from inserting commercial breaks during programming, meaning many Korean companies must be creative about getting their wares in front of viewers. As Korean dramas have become more popular with international audiences, global brands have pushed to be part of the action.

And no company has pushed harder than Subway, which has grown into the world’s largest fast-food chain by store count since its founding in 1965 in Bridgeport, Conn.

Colin Clark, the country director for Subway in South Korea, said product placements in popular dramas like “Descendants of the Sun” had a positive impact on global sales, specifically citing markets in China, Taiwan and Singapore. 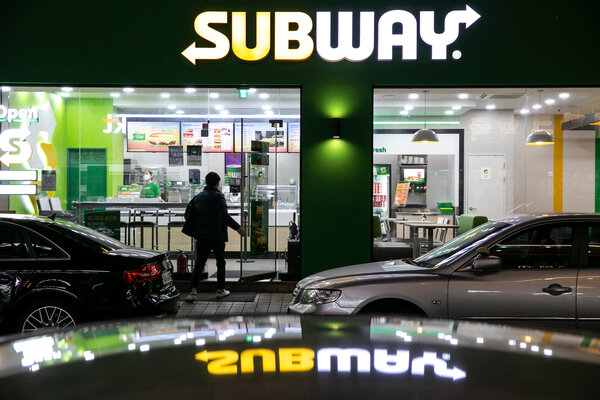 Subway did not provide a total of how many Korean dramas its products had appeared in, but an informal tally by The New York Times counted appearances on 17 shows. That can add up to a lot of people seeing the company’s cold cuts. Netflix, with over 203 million worldwide members, has become a leading portal for Korean dramas. When the highly anticipated Korean drama “Sweet Home” was released on Netflix in December, 22 million viewers watched the show in its first month.

By sleekly presenting its products on Korean dramas as a harbinger of cool, Subway is also presenting a fresh image to American viewers who are increasingly watching the shows.

Recently, the company has faced scrutiny of its bread, which an Irish court ruled is not bread, and its tuna, which a lawsuit claimed is “anything but tuna.”

But on TV, pristinely clean Subway shops pop with bright colors serve as the setting for business meetings, social gossip and dates for beautiful couples. Instead of cookies and tea, elderly Korean TV characters keep freshly wrapped Subway sandwiches at the ready — you never can know when an unexpected guest will drop by and crave an Italian sub.

On the popular Korean drama “Crash Landing on You,” North Korean soldiers and a South Korean businesswoman find common ground through Subway sandwiches.

Product placement in Korean shows began in earnest in 2010, when South Korea’s stringent broadcasting laws eased restrictions on the practice in an effort to increase network revenues and promote Korean goods. In 2018, South Korea’s networks sold $114 million worth of product placement, up 15 percent from the previous year, according to Soobum Lee, a mass communication professor at Incheon National University.

Shows collect an average of about $900,000 from product placements, although 2016’s “Descendants of the Sun” sold triple that amount, Mr. Lee said. It was also criticized by some viewers for excessive product placement.

Other American companies, like Papa John’s Pizza, have used product placements in Korean dramas, but none are as ubiquitous as Subway.

Ms. Kim said these kinds of shoehorned ads had become popular topics of discussion online, with some fans claiming they disrupt plots and threatening to stop watching altogether.

She pointed to criticism of the show “Guardian: The Lonely and Great God” (also known as “Goblin”) and a scene where it’s inferred that the protagonist prevents a man from committing suicide; in an effort to cheer him up, the suicidal man is handed a Subway sandwich. Subway is also celebrated in death; in another episode, the Grim Reaper is shown enjoying a meal from the chain.

“I know in the U.S. people are sick of it,” Ms. Kim said of the product placement. “We’ve had Subway, we know it’s not good. Stop trying to make it seem good.”

While American viewers may roll their eyes at Subway’s being portrayed as haute cuisine, Seung-Chul Yoo, a communications professor at Ewha Womans University in Seoul, said product placement had been proved to work.

When the actress Jun Ji-hyun wore red lipstick on the 2013 series “My Love From the Star,” similar products sold out in stores throughout Asia. Books featured on Korean dramas have become best sellers.

Marja Vitti, who covers Korean television for the website Dramabeans, said some fans had watched dramas to spot new products from companies before they were released to the public.

“I seem to notice a new Samsung feature in every drama,” Ms. Vitti said. “It’s like, ‘Oh, I guess we’re getting folding phones soon.’”

Keeping up with trends, Subway has begun teasing new sandwiches on shows. In October, the company released its own mini-drama on YouTube, “Someway,” about a young woman who develops a crush on a Subway employee and regularly eats at his location to win his affection.

Each episode begins with a character expressing fondness for a new sandwich variety, like one made with Altermeat, a meat substitute. The first episode of “Someway” has more than 1.3 million views.

“There’s humor in the advertising we’re doing,” Subway’s Mr. Clark said. “As a brand, if you take yourself too seriously, you’re going to end up always getting into trouble.”

Subway opened its first South Korea location in 1992. Now there are more than 430 Subways in the country, its second-largest footprint in Asia behind China.

To continually appeal to its target demographic of 15- to 25-year-olds, Subway is also becoming more inventive with how it is presented. On the drama “Memories of the Alhambra,” gamers competing in an augmented reality game collected valuable swords and coins by going to Subway.

Product placement “was a relatively cheap way to get us brand awareness,” said Mr. Clark, who has also overseen collaborations with the K-pop star Kang Daniel and a limited-edition Subway streetwear release with Fila. “It was something the other brands were doing, but weren’t really kind of owning that space the way Subway started doing.”

Mr. Yoo said that in South Korea, Subway was generally viewed as a healthier option than burger chains, which added to its appeal. During the decade he lived in the United States he rarely ate at Subway, he said, but now he regularly enjoys its sandwiches in Seoul.

“To be honest, it tastes way better in South Korea,” Mr. Yoo said.

Brands like Subway will soon be able to do more traditional advertising on South Korean television. In January, the Korea Communications Commission announced plans to allow commercial breaks on terrestrial stations.

Product placement is not likely to disappear, though.

Mr. Clark said that terrestrial advertising was too expensive and that those stations didn’t reach Subway’s desired young customer base, who frequently stream episodes on their phones.

Besides, the practice of product placement has already become a plot point.

On the show “Because This Is My First Life,” the lead character dreams of becoming a television writer. When she lands a job in the industry, her assignment is to jam product placements into the scripts of popular Korean dramas.