The first time Maxine Cheshire encountered Jacqueline Kennedy, then a young senator’s wife, at the Democratic National Convention in 1956, Mrs. Kennedy ran away, setting in motion a pattern that would continue throughout the years Ms. Cheshire covered her as a star society reporter at The Washington Post.

Ms. Cheshire would go on to make Mrs. Kennedy cry when she became first lady — prompting her husband to call Ben Bradlee, The Post’s editor, with his wife sobbing in the background — in response to a series about Mrs. Kennedy’s redecorating of the White House, which noted that its budget was enormous and that some of the antiques in the finished scheme were fakes.

“That hillbilly reporter,” as President Kennedy called her — her colleagues called her Max — had cut her teeth on the police beat at a paper in Tennessee. And her training, along with the baked-in moxie, luck and doggedness of Rosalind Russell in “His Girl Friday,” made Ms. Cheshire’s reporting required reading across the Beltway and beyond.

She often broke international scandals — influence peddling among South Korean operatives, for example, or the Nixon family’s attempts to hide hundreds of thousands of dollars worth of jewels, given them by the shah of Iran and others, in the middle of the Watergate scandal — through her work on the so-called women’s pages that were the Post’s vaunted Style section. She won multiple awards for her investigations.

Her sources were also legion — Washington being a bastion neither of probity nor, seemingly, of discretion of any kind. The dalliances, drinking and chin-wagging of its denizens recounted by Ms. Cheshire in her memoir, “Maxine Cheshire: Reporter,” published in 1978 and written with John Greenya, were of such magnitude that one wondered how any legislative work was done, what with all the hangovers and mistresses. Her network was so vast and infamous that Teddy Kennedy once said if his brother Bobby were elected president, he would give her the choice of either heading up the C.I.A. or the F.B.I.

Ms. Cheshire, scourge of first ladies, philandering politicians and Frank Sinatra, whom she challenged about his mob connections, died on Dec. 31 at her home in McAllen, Texas. She was 90.

The family announced her death late last month. Her son Marc Cheshire said the cause was heart disease.

“We’ve had more bloody trouble with gossip columns,” Mr. Bradlee told Katharine Q. Seelye of The New York Times in 2005. He added that Ms. Cheshire’s work had required his endless attention: “I spent more time with Max than I spent with Woodward and Bernstein.”

Maxine Hall was born on April 5, 1930, in Harlan, Ky., and she grew up in the years when the mining town known as “bloody Harlan” was roiled by union wars, as the miners fought to organize and the mine owners brutally fought back. Her father, Millard, a lawyer who had represented the miners, was nearly killed on more than one occasion and wore a bulletproof vest to work. Her mother, Sylvia (Cornett) Hall, who worked as her husband’s assistant, kept a gun in the house.

After the death of her father — from natural causes — Maxine dropped out of the University of Kentucky and returned home to live, taking a job at the local paper. But when she learned that the paper’s owner, a local power broker and thug, had marked her family for violence, the family — her mother, Maxine and two younger brothers — left town in the middle of the night. They settled in Knoxville, and Maxine was hired as a police reporter at The Knoxville News-Sentinel.

Her editor later told her: “I hired you to look at. It never occurred to me or to anyone else that you had a brain in your head.” But she was very good at her job.

She once fished a billfold out of a dead man’s blood-soaked pocket so she could identify him and make her deadline, rather than waiting for the police to do it. When a woman was found dead in a lake, Ms. Cheshire solved the mystery behind her demise, and Newsweek ran an article about her detective work, with a photo showing her typing barefoot at her desk, as was her habit.

At The News-Sentinel, she also met Herbert Cheshire, then the United Press bureau chief, though she was cursing at the time of their introduction, furious because the paper refused to run photos she had taken of votes being bought. Nonetheless, they married a few months later, and when Mr. Cheshire was transferred to Washington, she followed him.

It was 1954 when she landed on the society desk of The Washington Post, the right place at the right time — though she didn’t know it then; as she wrote, “I was looking for ax murderers, not ambassador’s wives.” The only job on offer was as a society reporter, but as it happened the women’s editor, Marie Sauer, was looking for someone to treat the beat as serious journalism. By 1965, Ms. Cheshire had her own column, VIP, which was syndicated across the country.

When Mrs. Kennedy married the shipping magnate Aristotle Onassis in 1968 on Skorpios, his private island, Ms. Cheshire was one of a global pack of reporters sent to cover the event, which Mr. Onassis did all in his considerable power to prevent, including marshaling the Greek navy. The Germans chartered an expensive yacht. The French deployed a young woman clad in a miniskirt (and no underwear) as a distraction. The Americans had Ms. Cheshire, who hurled herself into a packed Boston Whaler and onto the lap of a photographer, grabbing his hair as a tether. All these efforts failed, however, and in the aftermath, Ms. Cheshire broke her foot.

In what can only be described as the munificence of the copy gods, the Athens doctor who eventually treated her had an antique desk in his office that caught Ms. Cheshire’s eye — and her eye was very good; she had a sideline as an antiques collector — and she decided to check out his dealer, whose shop was nearby and who, she learned, just happened to be a close friend of Onassis. He also just happened to be back from the wedding, and he was delighted to tell her all about it.

Ms. Cheshire’s collision with Frank Sinatra was less delightful. It was Jan. 20, 1973, the night of Richard Nixon’s second inauguration, and Sinatra, a pal of the new vice president, Spiro T. Agnew, was there as a guest. The singer was visibly loaded, and he accosted Ms. Cheshire, who a year earlier had asked him whether he thought his reported ties to the Mafia would be a problem for the vice president.

“Get away from me,” he shouted at her. “You scum, go home and take a bath.” He then called her “nothing but a two-dollar broad,” adding an expletive used to deride women and stuffing two one-dollar bills in her empty glass. 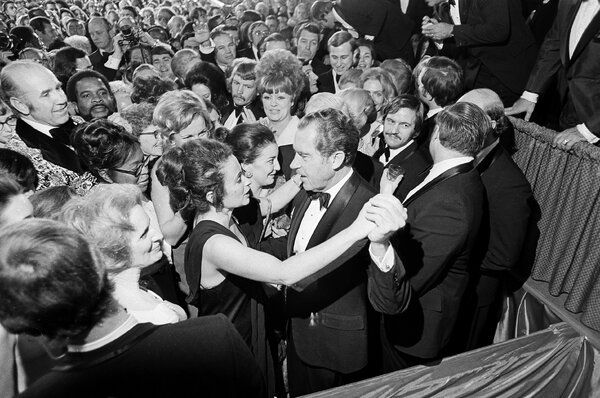 Ms. Cheshire and her husband went home deeply shaken. The story was covered around the world, and for a time Ms. Cheshire considered suing Sinatra. Instead she saved the bills and the glass, planning to make them into a paperweight (although she never did).

The Cheshires divorced in 1980. In 1982, Ms. Cheshire married Jasper Warren, known as Jack, the owner of an oil drilling company. She retired from journalism and moved to Texas. Mr. Warren died in 2013.

In addition to her son Marc, Ms. Cheshire is survived by two other sons, Hall and Gideon; a daughter, Leigh Wooldridge; and four grandchildren.

Over her career, Ms. Cheshire amassed files on all manner of shenanigans, stories she was unable to publish because she could not fact-check them to her own standards, or her paper’s.

In 1975, the conservative commentator James Kirkpatrick remarked on a television news program, “Whatever the F.B.I. may have, it’s probably nothing compared to what is tucked away in the files of Maxine Cheshire.”