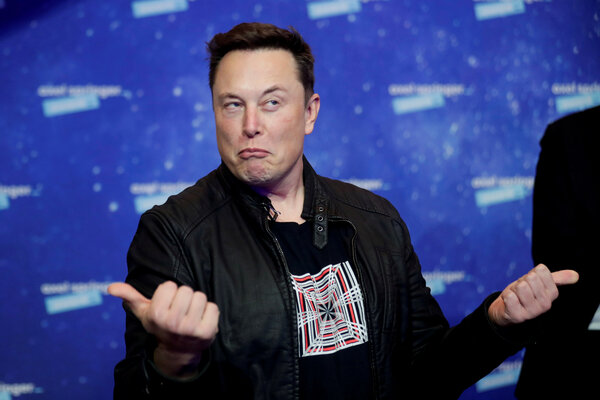 The electric carmaker posted record quarterly earnings yesterday, beating Wall Street forecasts. But a closer look shows that its core business — you know, making vehicles — wasn’t the only story, and that might be why the company’s stock fell in aftermarket trading.

Tesla reported a quarterly profit of $438 million, its highest ever. But financial maneuvers flattered this number:

Tesla’s $1.5 billion purchase of Bitcoin, and subsequent sale of a chunk of its holdings, led to a $101 million accounting boost. Bitcoin “so far has proven to be a good decision,” Zach Kirkhorn, Tesla’s C.F.O. (no, we’re not using his other title), told analysts yesterday, adding that the company would continue to invest in crypto as a place to park excess cash. (The company’s holdings will also grow as customers start buying cars with Bitcoin.)

Tesla also made $518 million from selling emissions credits to other carmakers, up from $354 million a year ago. This has been a steady, high-margin side hustle for Tesla as it ramps up auto production.

The business of selling cars is headed in the right direction, but faces supply problems. Vehicle deliveries came to 184,000, ahead of expectations, even as sales of Model S and X cars fell ahead of lineup revamps. But Elon Musk, Tesla’s C.E.O. (or, fine, “Technoking,” if we must), conceded that problems in sourcing components — notably, the global shortage of computer chips — had led to “some of the most difficult supply-chain challenges that we’ve ever experienced.” The real pinch may come in the second quarter, so it’s a good thing that Tesla has so many other businesses to fall back on.

Safety issues could be a bigger, long-term risk. Tesla is still dealing with an investigation into a fatal crash in Texas this month involving one of its vehicles, in which the police say no one was behind the wheel. Tesla’s chief engineer cited new evidence yesterday that potentially contradicts that claim. And the company is trying to put out a P.R. crisis in China, after the state news media accused it of “being arrogant” in its handling of a customer’s complaints about her car’s brakes.

“The main line in the sand now for the bulls and bears is not the near-term chip shortage,” Dan Ives of Wedbush wrote in a research note this morning. More important to Tesla’s finances is its ability to grow in China, he wrote, which could account for 40 percent of its deliveries by next year.

The U.S. will donate AstraZeneca vaccine doses to India. President Biden will send up to 60 million doses to help India quell its Covid-19 crisis, though only after U.S. officials test them for safety. Tech giants — including Google and Microsoft, both led by Indian-born executives — will also send supplies and funds to help.

U.S. population growth has slowed substantially. New Census Bureau data showed the second-slowest rate since 1790, as birthrates and immigration declined. The bureau also reported big changes to the political map, with the South and West gaining seats in Congress and New York, California and the Midwest losing representation.

The I.R.S. may get more money to go after tax evasion. Mr. Biden will propose giving the agency an extra $80 billion and additional authority to catch cheating by the wealthy and big corporations, The Times’s Jim Tankersley reports. Administration officials believe that could help raise $700 billion, which would assist in financing Mr. Biden’s infrastructure plans.

Et tu, UBS? The Swiss banking giant said it had lost $774 million from its exposure to Archegos, becoming yet another financial giant to be hurt by the investment fund’s meltdown. Nomura calculated its total hit from Archegos to be $2.3 billion and said it had mostly closed out its trading positions related to the firm.

Apple will build a $1 billion base in North Carolina. The iPhone maker said its new campus would have 3,000 employees, including software engineers. It’s the latest outpost for Apple outside California: The company is also opening a campus in Austin, Texas, next year.

A Supreme Court case argued yesterday has created strange bedfellows, which did not escape the attention of the justices. The matter pits charities against the state of California over donor disclosure requirements, and it’s a dispute over a seemingly small technical issue which some say has serious implications for political donations. It has turned groups that are often on opposite sides of political fights into — tentative — allies.

Nonprofits “across the ideological spectrum” filed briefs supporting the petitioners, the Koch-backed charity Americans for Prosperity Foundation, Justice Brett Kavanaugh noted. The foundation argues that California violates the constitutionally protected right to anonymous association by collecting major donor data and failing to protect it (the state’s website has experienced security breaches). Justice Kavanaugh cited a filing from the A.C.L.U., the N.A.A.C.P. Legal Defense and Education Fund and others who all agreed that “a critical corollary of the freedom to associate is the right to maintain the confidentiality of one’s associations.”

“Certainly, we don’t see eye to eye with the petitioners in this case on every issue,” Brian Hauss of the A.C.L.U. said at a news conference after arguments at the court. In this case, it’s standing with the Americans for Prosperity Foundation because of what it calls California’s “systemic incompetence” in failing to protect nonpublic data. Legally speaking, however, it recognized a distinction between public disclosure and nonpublic disclosure. In other words, the brief didn’t argue for a general extension of anonymity.

Opponents say this is a case about “dark money.” Democratic senators argued in an amicus brief that the foundation is advancing the matter as a way to make it easier for special interests to influence politics with untraceable money. “This case is really a stalking horse for campaign finance disclosure laws,” Justice Stephen Breyer said. A ruling is expected in June.

— Brian Wieser, president of business intelligence at GroupM, on the leverage that Apple has over Facebook. Apple’s Tim Cook and Facebook’s Mark Zuckerberg have increasingly been at odds, most recently over a new privacy feature Apple launched this week that gives users more control over how apps (like Facebook’s) can track them.

Blockchain for the long term

Amid the recent cryptocurrency frenzy, many people wonder whether it’s time to buy Bitcoin or mint an NFT and whether it’s too late to get rich quick. The Ethiopian government is also getting into blockchain in a big way — but it’s thinking longer term. Today, along with the software company IOHK, it launched the world’s biggest blockchain deployment to date, the partners say, involving five million students.

“We believe blockchain offers a key opportunity to end digital exclusion and widen access to higher education and employment,” Getahun Mekuria, Ethiopia’s education minister, said in a statement about the project hosted on the IOHK-backed, open-source Cardano platform. The project, which DealBook is first to report, will give students tools, identifications and access to a unified records system that allows rural and indigent young people to have the same system as others.

What’s Cardano? Charles Hoskinson, IOHK’s co-founder, is among the founders of Ethereum, the second-most valuable cryptocurrency after Bitcoin. He left in 2014 with a mission to bolster crypto’s intellectual underpinnings and advance blockchain’s reach around the world, emphasizing things like security and governance. IOHK does work for institutions, backs academic research on blockchain and supports the Cardano platform, the issuer of the sixth-most valuable cryptocurrency, ADA. Cardano’s critics say the platform’s valuation is mystifying because development has been sluggish. Hoskinson described his approach to DealBook by citing the axiom “To go fast, go slow.”

Basecamp, a company that makes productivity software, said yesterday that it had “made some internal changes,” including a ban on talking about politics at work. “Every discussion remotely related to politics, advocacy or society at large quickly spins away from pleasant,” Jason Fried, Basecamp’s C.E.O., wrote in a blog post. “You shouldn’t have to wonder if staying out of it means you’re complicit, or wading into it means you’re a target.”

Basecamp’s move echoes a ban on talking politics at Coinbase, which Brian Armstrong, the C.E.O. of Coinbase, enacted in September, prompting dozens of employees to leave the company. Surveys suggest that a large portion of employees believe that the companies they work for should speak up on social issues. Basecamp’s new policy is one of the least hedged signals yet that the feeling is not always mutual.

Both C.E.O.s framed it as removing distractions but carved out exceptions for issues they consider relevant to their businesses. “If there is a bill introduced around crypto, we may engage here,” Mr. Armstrong wrote last year, while Basecamp’s co-founder David Hansson wrote yesterday that the company might engage on “topics like antitrust, privacy, employee surveillance.” Both moves were immediately met with a mix of admiration and criticism, with supporters saying the policies are good for business and detractors arguing that choosing to abstain from politics is inherently political and probably impossible to enforce.

The timing of these announcements is probably no accident, following a surge of employee activism and corporate action on social issues. Basecamp’s move — notable because its founders have long evangelized the company’s worker-friendly culture in books and blog posts — is the latest sign that some companies may want to pull the pendulum back.

Armstrong of Coinbase applauded Basecamp, calling it “another mission focused company” on Twitter. “Who will be next?” he asked.

The Carlyle Group reportedly plans to raise $22 billion for its latest flagship fund, its biggest ever. (Bloomberg)

Thoma Bravo agreed to buy the cybersecurity company Proofpoint for $12.3 billion, in the biggest leveraged buyout of a software company on record. (Reuters)

Vaccitech, the start-up that created AstraZeneca’s Covid-19 vaccine, plans to raise up to $117 million in its U.S. trading debut, valuing it at more than $600 million. (FT)

State experiments with creating and seeding college accounts for newborns have showed an impact on aspirations as well as savings. (NYT)

Have questions about digital currency? So does the Fed. (NYT)

The stock market has risen more during President Biden’s first 100 days than any of his predecessors since at least the 1950s. (CNBC)

Lyft will sell its autonomous vehicle division to an arm of Toyota for $550 million, divesting a business that consumed large amounts of capital. (NYT)

Bloomberg and Goldman Sachs are teaming up to finance clean-energy projects in developing countries. (Bloomberg Opinion)

“The Free Market is Dead: What Will Replace It?” (Time)