Home » Business » The Fed Chair’s Message: ‘There Is Still a Long Way to Go’

Jerome H. Powell, the Federal Reserve chair, called the recovery “incomplete” and highlighted that it was better to overdo the pandemic policy response than to undershoot. 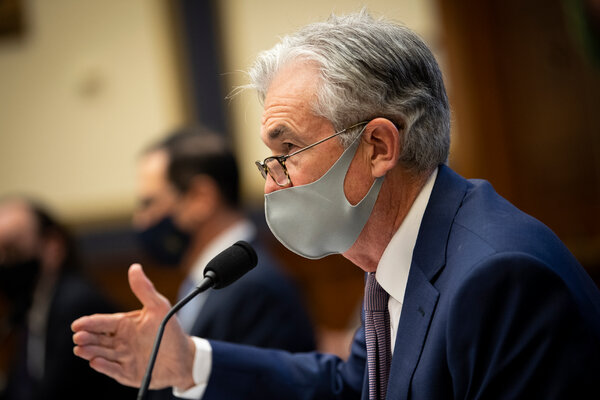 WASHINGTON — The Federal Reserve chair, Jerome H. Powell, delivered a message to his fellow policymakers on Tuesday: Faced with a once-in-a-century pandemic that has inflicted economic pain on millions of households, go big.

“Too little support would lead to a weak recovery, creating unnecessary hardship for households and businesses,” Mr. Powell said in remarks prepared for virtual delivery before the National Association for Business Economics.

“Over time, household insolvencies and business bankruptcies would rise, harming the productive capacity of the economy, and holding back wage growth,” he said. “By contrast, the risks of overdoing it seem, for now, to be smaller.”

While the unemployment rate has fallen more rapidly than many economists expected, dropping to 7.9 percent in September, millions of Americans remain unemployed as the coronavirus pandemic keeps many service industries operating below capacity. Consumer spending is holding up, but Mr. Powell underlined — as he has before — that the economy’s resilience owes substantially to strong government support for households and businesses.

“Taken together, fiscal and monetary policy actions have so far supported a strong but incomplete recovery in demand,” Mr. Powell said, adding that they have “muted the normal recessionary dynamics that occur in a downturn,” like a hit to demand that causes further layoffs.

Even as the labor market recovers, though, “there is still a long way to go.”

Congress has been debating further spending to support out-of-work families, struggling local governments and hard-hit businesses, yet a deal has so far proved elusive amid disagreements between Democrats, Republicans and the White House. Critical supports, including expanded unemployment insurance benefits, lapsed at the end of July, and stopgap measures meant to supplement for those policies have since run dry.

Mr. Powell also warned in his remarks that health concerns continue to threaten the recovery.

“We should continue do what we can to manage downside risks to the outlook,” Mr. Powell said, adding that requires “following medical experts’ guidance, including using masks and social-distancing measures.”

He also warned that more normal recession dynamics — like a pullback in consumption — could kick in should economic weakness drag on. And he highlighted that the labor market costs so far have been borne disproportionately by minorities, women and low-wage workers.

“A long period of unnecessarily slow progress could continue to exacerbate existing disparities in our economy,” he said. “That would be tragic, especially in light of our country’s progress on these issues in the years leading up to the pandemic.”

Policymakers should take action to avoid such an outcome, he said.

“The recovery will be stronger and move faster if monetary policy and fiscal policy continue to work side by side to provide support to the economy until it is clearly out of the woods,” Mr. Powell said.