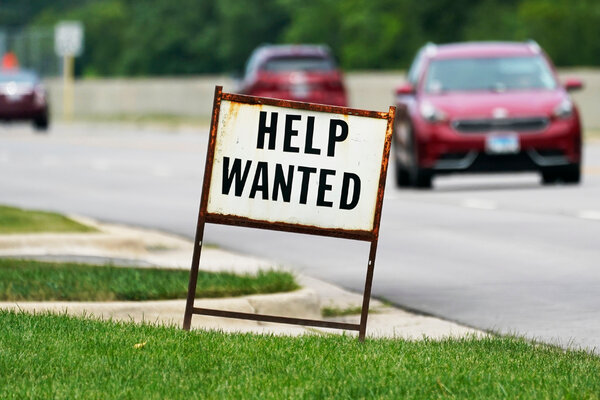 What the jobs reports says

This morning, the government will report how many workers U.S. employers added to their payrolls in July. Economists expect a big number — as many as 850,000 — in another sign that the economic recovery continues.

The stakes are higher than usual, as various emergency stimulus measures are about to expire, the infrastructure bill is nearing passage, and the Fed is contemplating how and when to taper its extraordinary efforts to support the economy during the pandemic. Economists have their eyes on both the number of jobs created as well as wages, which were up a relatively high 3.6 percent in June versus a year ago. Here’s how to interpret the results.

Weak job gains and little growth in wages: This is bad. The Delta variant of the coronavirus is causing more economic damage than thought. Congress could speed forward the infrastructure bill, and President Biden may emerge with more leverage to push through a bigger budget. As for the Fed? The urgency to taper bond purchases, and to eventually raise interest rates, fades away.

Weak job gains, but a big jump in wages: This is OK. Vincent Reinhart, Mellon’s chief economist, points to a growing mismatch between employers and job seekers, and notes that the economy isn’t weakening yet. That’s not a roadblock for an infrastructure bill, but it makes passing a big budget tougher. The Fed, meanwhile, needs to thread the needle between rising inflation and a job market that isn’t growing as fast as it could.

Strong job growth with muted wage gains: This is good, at least for businesses. The economy is strong, workers are returning to the job market and the supply and labor issues that have pushed up prices are receding. Biden would no longer have to fight arguments that government spending is causing inflation. The Fed can let the economy run with fewer fears of overheating.

Strong job growth and hefty wage gains: This is great, for now. The post-pandemic economy is in full swing, with workers reaping the rewards. But the recovery is likely closer to the end than the beginning. That puts ambitious government spending plans in jeopardy. The Fed may taper its support sooner, possibly leading to market tantrums.

The infrastructure bill will add $256 billion to the deficit over 10 years. The Congressional Budget Office analysis could complicate plans to vote on the bill this weekend. But the C.B.O.’s report didn’t include tens of billions in projected additional revenue, nor billions saved from redirecting unused stimulus funds.

Amazon, BlackRock and Wells Fargo push back their returns to the office. Amazon said corporate employees did not need to return until January, and BlackRock said only vaccinated workers would be allowed in offices starting in October. CNN fired three employees who violated its policy by going to the office unvaccinated, one of the first known examples of enforcement of a workplace mandate.

Robinhood loses its meme momentum. The stock of the trading app plunged 27 percent yesterday as early investors registered to sell shares after a red-hot run. Venture capital firms collecting big paydays as Robinhood’s shares sink (although they remain well above the I.P.O. price) could challenge the company’s image as a champion of small investors.

Exxon Mobil may pledge to go carbon neutral by 2050. Executives have previously called such pronouncements meaningless, and pushed back against government climate policy, but The Wall Street Journal reports that the company is now considering a “net zero” pledge.

Families of 115 U.S. service members killed overseas sue big banks. The lawsuit says that Deutsche Bank, Standard Charter and others helped to finance terrorist attacks by not policing its accounts. It is broader than past actions brought under a 2016 antiterrorism law, which had mixed results.

The green road trip of tomorrow

Biden signed an executive order yesterday calling for half of all new vehicles sold in the U.S. by 2030 to be electric. “They’re a vision of the future that is now beginning to happen, a future of the automobile industry that is electric,” he said at the White House, standing before an array of electric vehicles.

The shift to electric cars won’t be easy. Manufacturers and suppliers need to transform factories, charging stations need to be built and consumers need to be persuaded to buy. In June, less than 4 percent of new cars sold in the U.S. were pure electric vehicles or plug-in hybrids, a quarter of the share of electric sales in Europe. Biden’s order envisions building a nationwide network of charging stations, providing financial incentives and instituting new fuel-efficiency rules, moves akin to those made in Europe and China.

Policymakers have framed the push as part of a geopolitical competition, overhauling a major industry to compete with China, which makes about 70 percent of all electric-vehicle batteries, in an effort that blends environmental, economic and foreign policy. “This is the first example of how Biden’s administration would do industrial policy in the climate change context,” said Michael Oppenheimer of Princeton.

The auto industry is mostly on board. Ford’s C.E.O., Jim Farley, said in a statement that his company was “counting on strong cooperation” between the administration, Congress and state and local governments. Ford, G.M., Volkswagen and other auto giants have already begun selling tens of thousands of electric cars. Biden’s announcement is unequivocally good for Tesla, and could also help electric vehicle start-ups like Rivian and Lucid Motors get a jump on more established competition.

But automakers’ current preoccupation is shortages. New car production, of all kinds, is hampered by scarcity in key components like semiconductors, meaning that supply can’t keep up with demand as people get out again but are wary of crowds. That has led to “insane” market conditions for new and used cars alike, somewhat thwarting the efforts to push car buyers away from internal combustion engines. For now, most road trips are happening in gas guzzlers.

“It’s like if somebody is running the 100 meters and they have a weight around their ankles. That is not a fair judge of their speed.”

— Bob Costas, who spent 24 years as NBC’s prime-time Olympics host before leaving the network in 2017, on the Tokyo Olympics’ relatively low television ratings.

Apple launched a sophisticated system yesterday to detect whether an iPhone user is storing images of child sexual abuse, or if a child under 13 is sending or receiving sexual imagery by text. The Times and others have shown that tech companies have failed to police their platforms for child exploitation.

Some are concerned about Apple’s methods, writes The Times’s Jack Nicas. Cybersecurity experts say that the tools Apple is using to monitor sexual abuse images tips its hand that the company has more powerful surveillance tech than it has previously claimed. In the future, law enforcement and governments might compel Apple to use those tools in other ways.

Apple says that it has put in guardrails to protect privacy, and that the tech allows it only to see images flagged as child pornography. Apple’s attempt to police what few would defend highlights the thin line that tech companies walk between public safety and customer privacy concerns.

The S.E.C.’s Gary Gensler, Senator Elizabeth Warren and others sounded off this week on the need for stricter regulation of crypto, giving an impression of an industry under siege.

Cracking down on crypto also came up in negotiations over the infrastructure bill, which included a provision to raise $30 billion in taxes on crypto transactions. But on that front, the industry’s nascent lobby rallied to press senators for an amendment to clarify the tax provision, showing the lobby’s growing power.

Heavyweights chimed in. The venture capitalists at Andreessen Horowitz wrote to Senate leaders, calling the tax provision “overly broad” and suggesting a lawsuit looms if the language isn’t changed. Brian Armstrong, the C.E.O. of the crypto exchange Coinbase protested in a Twitter thread. Lobbyists worked behind the scenes with a bipartisan group of senators on an amendment set to be considered before the bill goes to a vote.

This is a preview of bigger battles. In addition to Gensler and Warren, the leaders of the House Financial Services Committee and the Senate Banking Committee have called for sweeping new rules and tougher enforcement. Representative Donald Beyer, Democrat of Virginia, recently introduced a comprehensive bill on digital assets that industry groups told DealBook they haven’t had time to analyze yet because the infrastructure fight is more pressing. After mounting a resistance to one provision in a 2,700-page bill, more serious battles await, and the true strength of the crypto lobby will be tested.

In other news, officials at the Fed seem increasingly divided over whether to issue a digital dollar.

The state-run China Telecom is selling $8.4 billion in stock on the Shanghai exchange, months after being forced to delist in the U.S. (Nikkei Asia)

Levi Strauss is stretching its product line with the acquisition of the active-wear brand Beyond Yoga. (CNBC)

Moody’s is bolstering its climate-risk business with the $2 billion takeover of the catastrophe modeling firm RMS. (WSJ)

Even if it gets tens of billions of dollars in the infrastructure bill, Amtrak’s expansion faces major challenges. (NYT)

Richard Trumka, a former coal miner who led the influential A.F.L.-C.I.O. labor union for the past 12 years, died at 72. (NYT)

“Back to office” shopping trends are bedeviling retailers. (Bloomberg Opinion)

The Daily podcast speaks with some of the 90 million Americans who are eligible for the coronavirus vaccine, but choose not to get it. (NYT)

Everybody loves Dave Raymond, who pioneered the role of the goofball sports mascot and is sought after by teams looking to capture their identities in furry form. (NYT)

We’d like your feedback. Please email thoughts and suggestions to [email protected]