Home » The Vaccine Liberation Movement Gets a New Ally 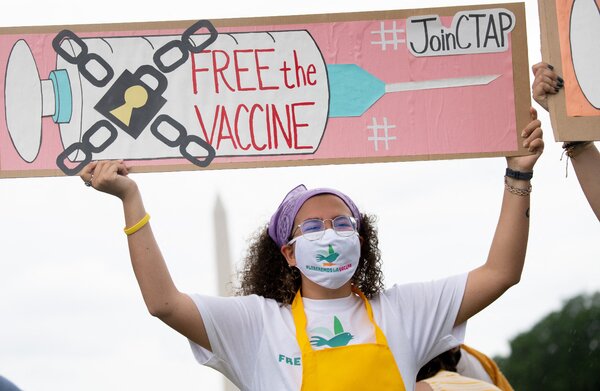 The U.S. opens up on vaccine patents

The Biden administration reversed course yesterday and came out in favor of suspending patent protections for Covid-19 vaccines. The move pits policymakers against drug companies, as infections in India, South America and elsewhere spiral, highlighting the urgency of more widespread vaccination.

Support for patent waivers has been growing, ever since India and South Africa introduced a measure at the World Trade Organization in October to suspend I.P. protections. Democrats and health activists argue that the move could lead to a surge in sorely needed doses: “This is exactly the kind of leadership the world needs right now,” said Senator Bernie Sanders of Vermont.

Drug stocks tumbled on the news. Major producers like Pfizer and AstraZeneca closed flat on the day, while smaller producers like Moderna and BioNTech — whose businesses depend on vaccine profits — tumbled. Companies whose vaccines haven’t yet hit the market, like Novavax, CureVac and Vaxart, were also down sharply.

Predictably, the industry punched back. Biden’s move would “undermine our global response to the pandemic and compromise safety,” said Stephen Ubl, the head of the PhRMA trade group. And Dr. Michelle McMurry-Heath of the Biotechnology Innovation Organization said, “Handing needy countries a recipe book without the ingredients, safeguards and sizable work force needed will not help people waiting for the vaccine.”

There are major questions to consider:

How long will it take for generic producers’ plants to get up and running? And would today’s vaccines be irrelevant by that point, if new variants prove resistant to existing shots?

How hard will it be to make the vaccines? The issue is especially pertinent for the mRNA shots based on breakthrough technology: Pfizer says its treatment uses 280 components from 86 suppliers and highly specialized manufacturing equipment.

Will this deter companies from making next-generation vaccines? “Intellectual property is the lifeblood of biotech,” Brad Loncar, a biotech investor, told The Financial Times. “If you take it away, you don’t have a biotech sector.”

Don’t expect action anytime soon. Until other big countries sign on, nothing will happen at the W.T.O. level, though European officials suggested today that they’re open to such a move. And any waiver would need to be accompanied by a “tech transfer,” in which patent holders supply generics makers with technology and personnel. That would also take time, said Scott Gottlieb, a former F.D.A. chief (and current Pfizer board member) who argued instead that President Biden should release more of the U.S. vaccine stockpile.

In the meantime, the move may prompt vaccine makers to act by donating more doses to countries in need. Moderna has also said it was willing to license its tech for postpandemic use.

The day in international economic diplomacy. Britain sent two naval vessels to the island of Jersey amid a dispute with France over fishing rights. The E.U. unveiled new plans to punish state-backed companies over unfair competition, a thinly veiled jab against China. And China “indefinitely” suspended economic relations with Australia.

Peloton recalls its treadmills. Shares in the at-home fitness company fell nearly 15 percent after it suspended sales of the Tread and Tread+, after warnings about reports of injuries and the death of a young child. Peloton’s C.E.O., John Foley — who had pushed back against regulators — called the company’s initial response “a mistake.”

Archegos may file for bankruptcy. The investment fund has hired insolvency advisers as its banks prepare to demand repayment for some of the $10 billion in losses its meltdown triggered, The Financial Times reported. Lenders are examining whether Archegos misled them about how much it had borrowed.

Chicago’s trading floors are about to get quieter. The Chicago Mercantile Exchange plans to permanently shut most of its open-outcry pits after closing them for the pandemic. The only survivor: the Eurodollar option trading pit.

Broadway is coming back — but not right away. While New York City plans to fully reopen by July, the shows won’t go on until September at the earliest, due to the time it takes to reassemble casts, implement safety protocols and ramp up marketing.

A Facebook-appointed oversight panel upheld the social network’s ban of former President Donald Trump in a highly anticipated decision yesterday. But it also punted a final-final decision back to the company, calling for Facebook to re-examine its rationale within six months and make a definitive decision to reinstate Trump, impose a time-limited suspension or ban him for good.

The board said the current, indefinite suspension isn’t appropriate. “In applying a vague, standardless penalty and then referring this case to the Board to resolve, Facebook seeks to avoid its responsibilities,” the board wrote in its report.

The message to Mark Zuckerberg is that “this problem is yours to fix,” writes Kevin Roose for The Times.

The qualified rebuke of the company also sent a message that the board’s power is limited, writes Will Oremus for Times Opinion.

The decision highlights how Facebook’s content-moderation policies draw the line “somewhere between blatant untruths and incitement to violence,” writes David Leonhardt for The Morning newsletter. Depending on where it lands, “Trump may be back on Facebook six months from now.”

The political reaction was as you’d expect. Trump put out a general statement, saying, “What Facebook, Twitter and Google have done is a total disgrace.” Rep. Jim Jordan, Republican of Ohio, said Facebook should be broken up (as did many other conservatives). Senator Richard Blumenthal, Democrat of Connecticut, called the decision “a minimal marker for truth and decency.”

Underlying the board’s statement is “a brutal assessment of Facebook’s errors in considering the substance of people’s messages, and not the context,” writes Shira Ovide for the On Tech newsletter.

Keeping Trump off Facebook may hamper his ability to remain the de facto leader of the Republican Party, write The Times’s Nick Corasaniti and Shane Goldmacher.

Today’s episode of “The Daily” features Cecilia talking through the board’s decision with host Michael Barbaro.

“Last week was terrible. We started with policy changes that felt simple, reasonable and principled, and it blew things up internally in ways we never anticipated.”

— Jason Fried, the C.E.O. of the software firm Basecamp, where a third of employees resigned after company executives banned political discussions in the workplace.

Driving questions at Uber and Lyft

As Uber and Lyft recover from the pandemic slump in their ride-hailing businesses, they face two big challenges, both to do with their drivers.

Driver growth isn’t keeping pace with rider growth. About 940,000 more people took at least one Lyft trip in the first quarter than in the previous quarter, Lyft said in its latest earnings report on Tuesday. But rider growth began to outpace driver growth at the end of February, leading to higher rates for passengers (and higher pay for drivers). Uber, which is facing a similar problem, said last month that it would spend $250 million on incentives to lure drivers. It now has 3.5 million drivers on its platform, about 4 percent more than last quarter, but 22 percent fewer than a year ago.

The debate over how to classify gig workers isn’t settled. Last year’s passage of Prop. 22, which ensured gig workers would be classified as independent contractors in California, was a huge win for Uber and Lyft. But it only settled the question for California. Last week, Marty Walsh, the U.S. labor secretary, told Reuters that “a lot” of gig economy workers should be classified as employees instead of independent contractors. And yesterday, the Labor Department blocked a Trump-era rule that would have made it easier to classify Lyft and Uber drivers as contractors.

Uber’s revenue in the first quarter, it reported yesterday, was reduced by the $600 million it set aside in response to a February ruling by Britain’s Supreme Court that Uber drivers in the country are not self-employed contractors, but workers entitled to benefits.

Gary Gensler, the newly installed S.E.C. chair, is testifying today before the House Financial Services Committee about the meme-stock volatility in January that led to trading restrictions and prompted an outcry about Wall Street’s relationship with retail investors. “I think these events are part of a larger story about the intersection of finance and technology,” Gensler will say in his prepared remarks, highlighting seven factors at play that also hint at his regulatory priorities in the months ahead:

Gamification. Fun features combined with predictive analytics on trading apps increase engagement. Watching a movie based on a streaming app recommendation, “we might lose a couple of hours,” Gensler said. “Following the wrong prompt on a trading app, however, could have a substantial effect on a saver’s financial position.” He suggested it may be time for new rules to address the practice.

Short-selling transparency. He wants to increase “transparency in the stock loan market.”

Social media. Investors exchanging views online is fine, but Gensler worries bad actors take advantage of legitimate debates. In particular, this risks sending false signals to algorithms that some investors use to gauge the “relationships between words and prices.”

Plumbing. When brokers restricted customer trading in meme stocks, they blamed clearinghouses and two-day settlement times. Gensler said same-day settlement is possible and has asked for a draft proposal on it.

Systemic risks. The S.E.C. will issue a report over the summer, the chair said, examining what happened in detail during the meme-stock frenzy and considering “whether expanded enforcement mechanisms are necessary.”

Carlos Brito, who oversaw the series of takeovers that turned AB InBev into the world’s biggest brewer, is stepping down as C.E.O. (Reuters)

Shares in Honest Company, the personal-care products maker, jumped in its trading debut, giving the actress Jessica Alba, its co-founder, a stake worth about $130 million. (Bloomberg)

President Biden doubled down on his plans to raise taxes on the wealthy, but said their vacation homes and private jets were safe. (NYT)

Tesla may lose one of its biggest customers for emissions regulatory credits, a major source of profits. (Insider)

Speaking of Bezos, this in-depth look at how he handled the National Enquirer scandal is a must-read. (Bloomberg Businessweek)

New York officials’ plan to finance a renovation of Penn Station by building 10 new skyscrapers is endangered by the drop in demand for office space. (NYT)