The BBC’s weekly The Boss series profiles different business leaders from around the world. This week we speak to Laura Johnson and Zoe Procter, founders of Zebedee Management, a talent agency that represents models and actors with physical and learning disabilities.

Zoe Procter and Laura Johnson were walking along a beach when they came up with their business idea.

Laura, who is married to Zoe’s brother, recalls how she was visiting her sister-in-law in 2017 during her maternity leave from her job as a social worker. 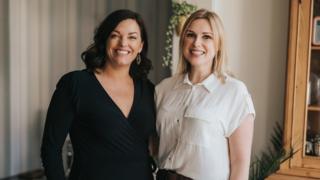 “We were having a chat and putting the world to rights, talking about the lack of representation of disabled people in the media,” she says.

Zoe, a model-turned-performing arts teacher for disabled adults, was saying that while her students “were so talented and keen”, they faced limited opportunity. The women wondered how, without a talent agency, Zoe’s students and other disabled people, would ever get acting or modelling work. So they decided to set one up themselves.

“It sounds cheesy, but it was like a light bulb moment,” says Laura.

Work began the moment they returned from the Lincolnshire shoreline. They named their company after Zebedee, the character who bounces on a spring in the much-loved children’s TV programme The Magic Roundabout.

“In a way, he has his own sort of mobility needs, and is also such a really happy, bouncy fun character,” says Laura.

They emailed UK disability groups and set up social media accounts to connect with potential talent. Just three years later, Zebedee now has more than 500 people on its books around the world, with its headquarters in London, and offices in New York and Los Angeles.

After Laura and Zoe had secured their first clients in 2017, their next challenge was to earn a reputation as a trusted talent agency, as casting directors are more likely to work with agents they know they can rely on. Relationships are everything.

“We hammered on doors and begged people to see our people,” says Zoe. “Everyone thought, ‘who are these women?'”

With casting directors listing job adverts on industry websites every day, describing the look, age or gender required, Zoe and Laura also decided to put their clients forward for work whether or not disability was listed in the job advert.

“If we waited for a call saying ‘disability’, we’d have no jobs,” says Laura.

Their first breakthrough came when a client was picked to model a set of colourful hospital gowns. Some 200 roles were secured that first year, compared with 600 so far in 2020, despite the coronavirus pandemic.

Zebedee Management collects a small percentage of the fee from each casting, in line with industry standards of between 10-15%.

When they began the agency, Laura and Zoe say they were often asked what would be their dream advertising campaign for one of their clients to front. Laura, a new mum at the time, longed to see a baby with a disability on a nappy or baby wipe advert. Zoe hoped to see one of their clients as the face representing a high-end fashion brand.

This summer, both of their dreams came true.

In June, Ellie Goldstein, an 18-year-old from Essex, who has Down’s syndrome, featured as the face of a Gucci Beauty advertising partnership with Vogue Italia. The picture Gucci Beauty put on Instagram, in which Ellie wore its Mascara L’Obscur product, has been the brand’s most popular post to date, liked by more than 117,000 people.

“The Gucci shoot was really good,” says Ellie. “I tried on lots of hair accessories, lots of makeup and costumes. I loved it. I was, like, so shocked that this happened.”

Around the same time, another client, a baby called Lenny, who also has Down’s syndrome, was featured in TV and print ads for Pura baby wipes.

Despites these success stories, Zoe says some of their clients still face an auditioning process that is not always inclusive.

“Our people have been left out of castings because they cannot physically enter the building,” she says. “Children in a wheelchair couldn’t get in, because a ramp had not been provided.”

In another case, a wheelchair-using adult had to get someone they didn’t know to carry them up some stairs.

“Not making adjustments because somebody can’t access the building is absolutely outrageous, in my opinion,” says Louise.

Covid-19 has mitigated this problem, however. In the continuing absence of physical auditions, casting directors have switched to “self tapes”, and prospective talent now generally submits a video or picture they have made from home.

Kate Evans, chair of the Casting Directors Association, says that Zebedee is continuing to make a real difference.

“Zebedee Management is at the forefront of ensuring diverse talent are represented and considered for all roles across the industry,” she says.

In setting up Zebedee, Laura and Zoe created what is believed to be only the second dedicated talent agency for disabled people in the UK. The first, called VisABLE, was set up in 1993 by agent Louise Dyson, but the sisters-in-law say they were unaware of that business when they first decided to set up their company.

Laura says what is most pleasing is that all their clients “say the impact has just been overwhelming, in terms of their self esteem, their feelings of self worth and the impact on the wider family. And, they are earning their own money.”

Zoe adds that while Zebedee has had some media coverage, she hopes “this is more than just news”.

“I hope it is a start – the start of a real change in how marketing campaigns are put together.”