Home » Business » What is the cost of ‘cancel culture’?

Pavel Paulinich was working as a chef in Washington DC when coronavirus shut down most of his industry.

With more free time on his hands, Mr Paulinich began to focus on his social media accounts, including a new page he created called Karens Going Wild.

For a while, Mr Paulinich, who is originally from Peru, says he was hearing stories from friends about prejudiced interactions and seeing a growing number of videos posted online that showed racist behaviour across the US.

He wanted to do more to ensure these incidents got public attention and he says he wanted to form a “safe space” for those who filmed the videos to publish them.

The account – which has more than 700,000 followers on Instagram – posts images and videos of individuals behaving in prejudiced and bigoted ways. It was receiving so many submissions that Mr Paulinich created a second back-up account.

The title Karens Going Wild refers to a popular meme, “Karen”, seen as an entitled or demanding person, typically a white woman, who often expresses racist or prejudiced views. 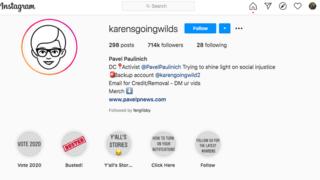 The goal for Mr Paulinich and activists like him is to use social media to draw attention to these actions, publicly shaming the people involved and ultimately getting the people “cancelled”.

“These times of doing whatever you want without consequences are over,” he says.

What is ‘cancel culture’?

So what exactly does it mean to be cancelled?

In its simplest form, cancelling someone on social media is a way to say, “I’m done with you.” Cancel culture can also be used to call on others to reject a person or business when their behaviour goes against the social norm – for example, making sexist comments.

For “cancellers” such as Mr Paulinich, the goal is to create public awareness, shame the person or group involved and create consequences, including economic consequences.

One of the simplest ways to accomplish this is to create enough public outrage that the cancelled person loses their job.

On 27 June, a video of a man shouting at an elderly woman at a Costco in Florida was shared on social media, along with a call to identify him.

The video went viral and by the following day, the man had been identified from a picture on his company’s website.

Hours after he was identified, with a growing number of posts expressing outrage at his action, he was fired.

In a statement, the company thanked those commenting on the internet for raising awareness about the behaviour of its “former employee”.

“Their behaviour in the video is in direct conflict with our company values,” it said.

Other examples of cancel culture costing someone their job include:

But when a business fails to live up to the values of its customers, it can quickly become the target of cancel culture and face financial consequences.

“I think that one of the best things about social media is it allows people to speak back to institutions and corporations with enormous money and power,” says Kimberly Foster, the founder of black feminist community For Harriet, who has written about the impact of cancel culture.

Some of the brands targeted by cancel culture:

One of the clearest examples of cancel culture’s impact on a brand was the boycott of Goya Foods in July 2020.

The company’s chief executive, Robert Unanue, attended an event at the White House where he praised President Donald Trump.

Cancellers claimed that praising President Trump, whose policies they said were harmful to the Latino community in the US, showed that Goya and its executives did not support the same values as its customers.

The cancel culture pile-on was swift. Pictures of people throwing away Goya products and buying other brands circulated, along with the hashtags #Goyaway and #BoycottGoya trending within hours of the event.

Politicians including Alexandria Ocasio-Cortez, celebrities such as Lin-Manuel Miranda and ordinary people all took to social media to say they would no longer be buying Goya products.

Alexis Odesser, an expert in crisis public relations at Bliss Integrated, explains there is not just a desire but “real expectation” that brands will live up to their customers’ values.

“People are making buying decisions with these things in mind,” she says.

Ms Odesser says that for companies targeted by cancel culture, that often means reacting to social media demands before consumer preferences eat into their bottom line.