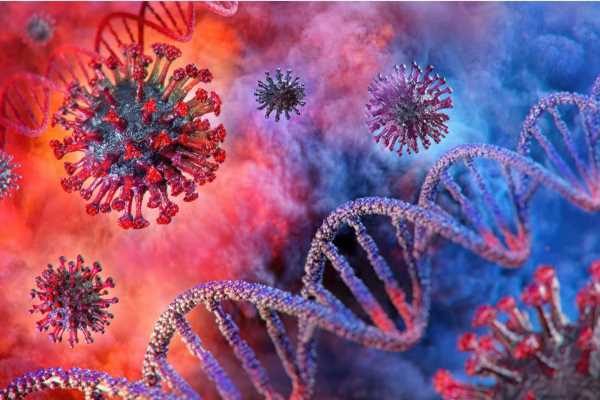 Severe acute respiratory syndrome coronavirus 2 (SARS-CoV-2) spillover from animal reservoirs has triggered one of the largest public health crises and crippled the world economy. Therefore, it is crucial to know which other viruses may be primed for transmission into humans by developing an in-depth understanding of the molecular-level determinants of zoonotic transmission. As molecular compatibility during viral entry is a key determinant of viral tropism and host switching, this understanding would help timely surveillance and the mitigation of pandemics like the coronavirus disease 2019 (COVID-19) pandemic in the future.

SARS-CoV-2 binds to host cell surface receptor ACE2 using RBD, a 233-residue folded domain within its S protein. The sarbecovirus subgenus has several viral clades; while clade 1 sarbecoviruses, such as SARS-CoV-2, are known to utilize ACE2, the receptors for clade 2 and clade 3 viruses are unknown.

The results demonstrated that clade 3 sarbecoviruses consistently used various subsets of ACE2 alleles from a panel of horseshoe bats, while at least two were also capable of using human ACE2.

Of the clade 2 and clade 3 RBDs, only BtKY72 and Khosta-2 used human ACE2 for entry, while BtKY72 and Khosta-1 exhibited widespread use of diverse rhinolophid ACE2s. A lysine residue at ACE2 position 31 primarily determined the inability of these RBDs to use specific ACE2 sequences. The ACE2 protein from R. alcyone engaged all known clade 3 and clade 1 receptor binding domains. The BtKY72 chimeric virus exhibited slightly increased infection in the presence of transmembrane protease serine 2 (TMPRSS2). Furthermore, upon the alignment of the BtKY72 RBD with the SARS-CoV-2 RBDs, several highly conserved positions at the alleged ACE2 interface, such as residues Y488 and T499.

Although not sufficient, compatible interactions between viral and host receptor proteins are necessary for zoonosis. Due to multifactorial in vivo replication and additional incompatibilities in immune antagonism, these incompatible interactions might not allow entry and replication of BtKY72 and Khosta-2 within humans, averting the possibility of a zoonotic event. While BtKY72 and Khosta-2 RBDs utilized human ACE2, the extent of pseudovirus infection conferred by their RBDs was far too less than that by SARS-CoV, SARS-CoV-2, and WIV1 RBDs. WIV1 is a bat virus closely related to SARS-CoV, likely its precursor, capable of using human ACE2 for entry and isolated following the initial SARS-CoV outbreak of 2002.

There was no clear evidence of the use of Rhinolophus ACE2 orthologs by the clade 2 sarbecoviruses, including various alleles from R. sinicus and R. pearsonii, raising the possibility of another unknown receptor. Further, the study results suggested that clade 3 sarbecoviruses from Africa and Europe used Rhinolophus ACE2 for entry, and their S proteins appeared primed for zoonosis under the right conditions.

The study findings highlighted that all currently sequenced sarbecoviruses have two types of RBDs based on their ACE2-dependence or independence. The ACE2-dependent viruses have further segregated into subgroups that differentially utilize host ACE2 protein sequences during viral entry. Although the sequences within the ACE2-dependent RBDs can be highly divergent, a grouping of pairwise interactions determines the patterns of ortholog-specific compatibilities enabling successful entry during potential zoonotic events. The study provided a new genetic roadmap for characterizing receptor utilization during viral entry and demonstrated that clade 3 sarbecoviruses likely utilize ACE2 as a cell-entry receptor during infection.

Since the study results demonstrated that there are sarbecoviruses partially primed to jump into humans, efforts must be made to identify them in other continents outside of Asia, including Africa and Eastern Europe. As more Rhinolophus ACE2 sequences will be sequenced and tested using similar or more advanced functional assays, the precise molecular determinants of sarbecovirus RBD and ACE2 compatibility will become clear. The drastic differences in observed compatibilities also highlight the importance of knowing the genotypes of both the virus and host. Based on their RBD-ACE2 compatibilities, the geographical locations of their host species serving as in vivo reservoirs may be found, which may also be overlapping. Future studies simultaneously sequencing both the viral genome and host ACE2 sequences from a single sample would help uncover complex relationships between viruses and their natural hosts.

Most importantly, the study highlighted how molecular barriers normally prevent zoonosis, especially amid eroding ecological and societal factors. Therefore, now the focus should be on preventing future pandemics due to other viruses, such as Merbecoviruses, Henipaviruses, or Filoviruses, by preventing their zoonotic transmission.

Neha Mathur has a Master’s degree in Biotechnology and extensive experience in digital marketing. She is passionate about reading and music. When she is not working, Neha likes to cook and travel.