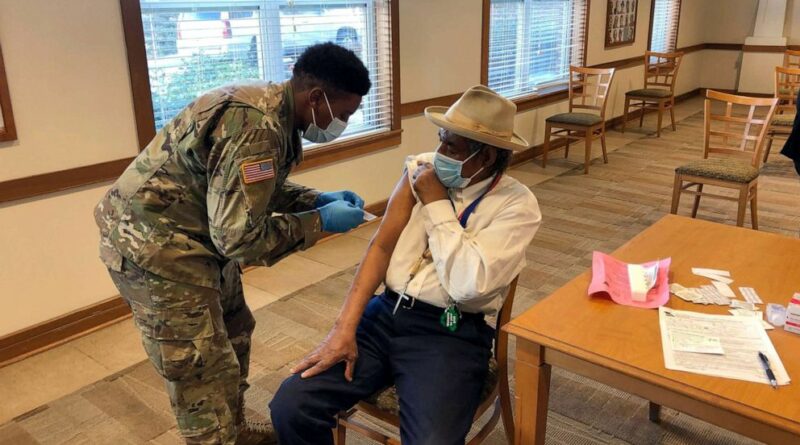 Health care workers in southwest Missouri are sounding the alarm over a wave of young, unvaccinated COVID-19 patients who are now filling hospital beds.

Leanne Handle, an assistant nurse manager of a medical surgical COVID-19 unit at CoxHealth in Springfield, Missouri, colchcine versus allopurinol said she and her staff have seen the patient population over the past year go from elderly people who are immunocompromised or have multiple other conditions to, more recently, younger individuals who “don’t think COVID is real” and haven’t been vaccinated against the disease.

“Right now, our average patient population is anywhere from 30 to 55 [years old]. We have seen patients as young as 18,” Handle told ABC News in a self-filmed video diary on Tuesday. “I cannot speak to the pediatric population, as our unit doesn’t take care of them.”

“So, what we’re seeing now are the patients who are coming in who don’t think that they’re going to get sick from it, who aren’t mentally prepared to make life and death decisions of do they want to be intubated, do you want CPR if your heart should stop,” she added. “We have very few patients who have been admitted that have been vaccinated. So it has been proven to keep you at least out of the hospital, and from severe disease.”

Handle also noted a “scary trend” among younger patients with the spread of the so-called delta variant, a highly contagious strain of the virus that was first identified in India and has since been detected in more than 80 countries around the world as well as dozens of U.S. states, including Missouri.

“With the new variant in our area, these patients are getting sicker quicker,” she said. “They are progressing through this spectrum very, very quickly.”

“We are still throwing everything that we have at them,” she added. “But our methods are mostly supportive to get the virus to stop replicating within the body. And by the time you’re already in the hospital, so much damage has been done that we can’t stop what’s going on. So, as a health care provider, what I want the community to know is that your best bet to avoid severe disease is to get vaccinated.”

Handle said there is currently no lack of beds in her unit, but there is a limited number of staff to take care of severely ill COVID-19 patients because the hospital is now operating at full capacity.

“We’re tired of taking care of COVID patients, and I’m saying this in the best way possible, because the majority of patients that we see now on our unit are — they don’t have to be there,” she told ABC News. “Their admissions were preventable.”

Handle urged people to “be smart, get vaccinated” and to keep in mind that frontline workers, like herself, are still battling the coronavirus pandemic even though life may seem to be returning to normal, with many restrictions lifted.

“We’re still in the midst of it every time we go to work, to clock in,” she said.

Since the start of the pandemic, the United States has reported more than 33.5 million confirmed cases of COVID-19, of which over 602,000 were fatal, according to data collected by Johns Hopkins University. More than 520,000 of those cases and at least 9,250 deaths were in Missouri, which has a population of about 6.1 million. So far, over 2.6 million residents have received at least one dose of a COVID-19 vaccine, including more than 2.3 million who are fully vaccinated, according to data from the Missouri Department of Health and Senior Services.

Although COVID-19 cases are declining nationwide, infections in areas with low vaccination rates persist across the country as new, more transmissible variants emerge. Missouri now has the highest percentage of delta variant infections than any other U.S. state, compromising 29.1% of new COVID-19 cases, according to data from the Centers for Disease Control and Prevention. In Missouri’s Greene County, where Springfield is the county seat, local health officials currently estimate that 90% of new COVID-19 cases are the result of the delta variant.

Dr. Anthony Fauci, director of the National Institute of Allergy and Infectious Diseases and chief medical advisor to President Joe Biden, said Tuesday that the delta variant is the “greatest threat” to the nation’s attempt to eliminate COVID-19. The national presence of the delta variant has doubled to over 20% in the last two weeks and continues to double on the same timeframe, according to Fauci. He said the strain is spreading rapidly among young people in the United States, which appears to be “following the same pattern” as the United Kingdom, where the delta variant was detected in mid-April and is now the dominant strain.

The CDC’s director, Dr. Rochelle Walensky, has warned that the delta variant will likely soon become the dominant strain in the United States, too. It’s something health officials are “actively trying to prevent,” Walensky told ABC News last week, which is why they are “really encouraging people to get vaccinated.”

Since taking office earlier this year, Biden has set a goal of getting 70% of all American adults ages 18 and older vaccinated against COVID-19 with at least one shot by Independence Day on July 4. But on Tuesday, White House COVID-19 coordinator Jeff Zients conceded that the current pace of vaccinations would prevent the nation from reaching that target. White House press secretary Jen Psaki said the country has already met the goal of 70% of partially vaccinated adults among those aged 30 and older, but that it’s been harder to vaccinate younger populations as well as conservative communities and people of color.

CoxHealth, a six-hospital system in southwest Missouri, announced last week that there’s a possibility it may soon begin diverting some COVID-19 patients to other facilities throughout the state due to to surging admissions at one of its hospitals, Cox South, which it said is “associated with the delta variant.”

“The health system currently has 79 inpatients with COVID-19, which is a more than five-fold increase from less than a month ago,” CoxHealth said in a statement on June 18. “If projections prove true, the number of COVID-19 cases and hospitalizations will continue to dramatically increase in the coming weeks. We hope this won’t be the case. However, we continue to strongly encourage our communities to utilize the strongest tool we have against this surge: vaccination. Despite increasing hospitalizations, we are seeing very few people who have been vaccinated become critically ill. These vaccinations can be the line between life and death.”

Ivy Garcia, a critical care nurse at CoxHealth in Springfield, Missouri, said she has been working in a COVID-19 intensive care unit throughout the pandemic and has seen an “uptick” in the number of patients requiring hospitalization in recent weeks.

“We’ve been seeing much younger patients needing management within the hospital — some as young as their late teens, in their 20s, in their 30s and, unfortunately, all of those unvaccinated and very sick,” Garcia told ABC News in a self-filmed video diary on Tuesday

Garcia asked for prayers for those still working in COVID-19 wards, such as herself.

“We are tired, just like everyone else, and it has been a very painful year and so please pray for us,” she said, her voice wavering as she fought back tears. “There are stories that we don’t want to tell you and experiences that we have been through.”

Garcia said seeing the number of people who “have put themselves second” throughout the pandemic to serve others — from health care workers to teachers, delivery drivers and grocery store employees — has inspired her to “keep fighting.” She remains hopeful that “we will get through this and we will get through this stronger,” she said.

“This has been a very difficult year for everyone and I don’t know that anyone is going to be able to escape this pandemic unaffected in some way,” she noted. “But it is compassion and empathy that is going to help us find peace personally and as well as finding healing in our community after we get through this pandemic.”